Hell’s Gate National Park is located in Kenya, north of Nairobi, south of Lake Naivasha. Hell’s Gate National Park is called after a tiny gorge in the rocks that was formerly a stream of a prehistoric lake that fed the Rift Valley’s early people. It was founded in 1984. It is a tiny national park recognized for its diverse species and scenic beauty. The Fischer’s Tower and Central Tower columns, as well as Hell’s Gate Gorge, are included. At Olkaria, the national park also has five geothermal power units. There are three basic campsites in the park, as well as a Maasai Cultural Center that teaches about the Maasai tribe’s history and traditions.

The park is popular because it is near to Nairobi and has lower park fees than other National Parks. Within the park, hiking, biking, motorcycling, and even camping are permitted, making it one of just two Kenyan national parks to do so. The mountain climbing in Hell’s Gate was described as “thrilling” by the Daily Nation. The Joy Adamson’s Centre and canoeing on Lake Naivasha were both suggested. A Maasai Cultural Center is a place where Maasai tribe members may learn about their culture and customs.

The park has three simple campsites, and although though there are no firearms or fencing between you and the wildlife, camping is safe in the park.

There are various resorts in the Naivasha Lake area that are popular with travelers for watersports, private ranch bird and game viewing, and treks around Crescent Island, Crater Lake, and Mt. Longonot. 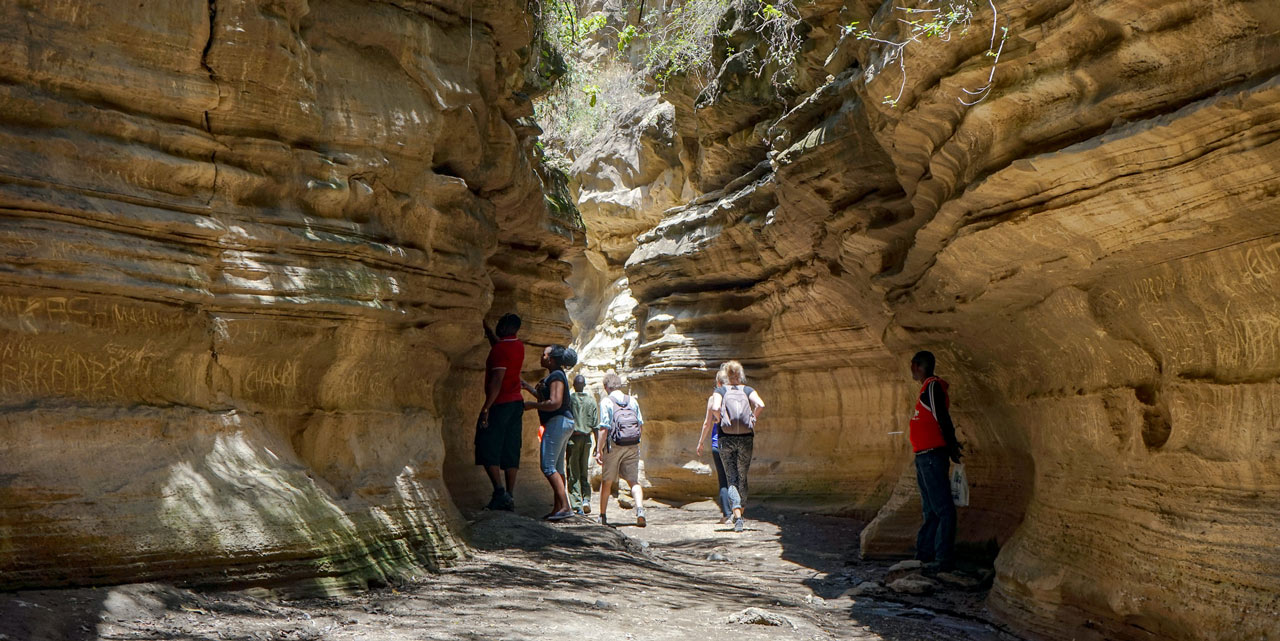 Hell’s Gate isn’t known for its wildlife safaris. Only buffalo are sighted among the Big Five, whereas leopards are there but rarely seen. Giraffe, zebra, eland, hartebeest, and Thomson’s gazelle are among the most prevalent animals. Olive baboons are frequently spotted sitting on the rocks, and a keen observer may discover a couple of klipspringers. The Chanler’s mountain reedbuck, which may be found grazing on the grassy slopes, is less frequent.

Hell’s Gate National Park is known for its spectacular landscape. The name is a reference to the park’s steep-sided valley.

Dormant volcanoes and many old lava plugs protrude from the valley floor, dominating the volcanic terrain.

Hell’s Gate has a climate that is comparable to other sites around the equator in that temperatures are very stable throughout the year. Its height, which is high enough to give the air a distinct chill, particularly at night, is what sets it apart. The Dry season (June to October) is known for its clear skies, whilst the Wet season (November to May) is known for its afternoon rains.

The Best Time to hike at Hell’s gate

Except for the Christmas season, Hell’s Gate receives relatively few tourists, so you don’t need to plan your visit around it.

“A Walk on the Wild Side”

The Hell’s Gate National Park is a spectacular sector of the Great Rift Valley, named for the strong geothermal activity that occurs inside its bounds. It is one of Africa’s most dramatic parks, with its towering cliffs, water-gouged gorges, stark rock towers, scrub-clad volcanoes, and spewing plumes of geothermal steam. Hell’s Gate is a fantastic day excursion from Nairobi, where tourists may enjoy mountain riding, rock climbing, and a natural spa in addition to the bio-diversity that includes raptors.

The greatest time to go wildlife viewing is during the dry season (June to October), when the vegetation has thinned out and the animals are easier to see. The rainier months, on the other hand, are rewarded with breeding birds of prey and lush flora.

The Olkaria Geothermal Station, Africa’s first of its type, was built in 1981 to generate geothermal energy from the area’s hot springs and geysers beneath Hell’s Gate.
After the year 2000, three new geothermal stations were built: Olkaria II, Olkaria III, and Olkaria IV. Olkaria V, a 140MW power station, began construction in 2017 and went operational in 2019.