Climbing Mount Meru might sound easier on paper but on the ground, this steep mountain comes with many adventures than just trekking. Be prepared for wildlife watching, stunning views, and an overall exciting trek. Mt. Meru, despite being overshadowed by its big sister, Mount Kilimanjaro, this mountain packs a punch and is no walkover. It is steeper than Mount Kilimanjaro and is a perfect acclimatization exercise to prepare for a good Kilimanjaro climb. Located about 50 miles to the west of Mt. Kilimanjaro and only a stone’s throw away from Arusha National Park and approximately 51 km from Arusha City Centre, Mount Meru is a massive volcano that rises to 14,980 feet in altitude (4,565 meters). This climb is also designed for hikers who want fewer people on the routes and a more challenging ascent.
Because Mount Meru is confined within the boundaries of Arusha National Park, trekkers must be accompanied by an armed ranger owing of the mountain’s diverse fauna. Hikers are more likely to encounter elephants, giraffes, and buffalo on the mountain’s lower slopes! The route hugs the north wall of the canyon as hikers continue scaling the slopes of the mountain.

The route follows the north rim of the volcano’s crater along a spectacular ridgeline as hikers continue their ascents. Hikers sleep in designated cabins instead of tents along the path throughout the ascent, similar to the dormitory-style huts along the Marangu Route on Mount Kilimanjaro. Weather permitting, hikers will get amazing views of Mt. Kilimanjaro and the Mt. Meru Crater when they approach the peak of Mount Meru, the Socialist Peak as the sun rises.

Tanzania’s second-highest peak, Mt Meru, stands at 4566 meters. It’s a magnificent volcanic cone with one of East Africa’s most picturesque and rewarding climbs, featuring a thrilling walk along the knife-edge of the crater rim, despite being eclipsed by Kilimanjaro in hikers’ eyes.
At 2000 meters, Mt Meru begins its ascent from a 20-kilometer-wide circular base. The upper part of the mountain is formed like a big horseshoe because a section of the wall has broken away at 2500m. The inner wall below the top has cliffs that are more than 1500 meters high, making it one of Africa’s highest. Recent volcanic eruptions inside the crater have formed a secondary peak known as the Ash Cone, which adds to the crater’s size.

Where is Mount Meru and how to get there?

Mount Meru, located in Arusha is only 40 minutes away from the Kilimanjaro International Airport which is around 60 kilometers (35 miles) away. The Mountain itself is a stone’s throw away from Arusha town and can be easily seen any time of the day from Arusha, weather permitting. 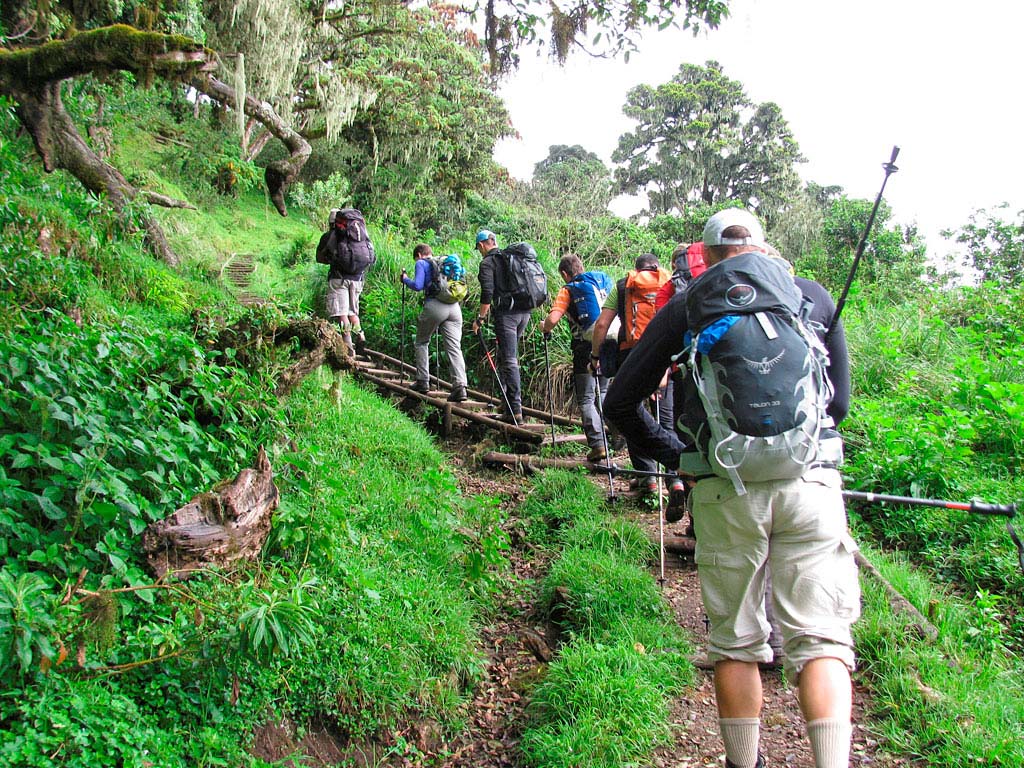 Climbing Mount Mount Meru has many advantages than people think. There are many reasons to climb this beautiful mountain that stands out of the crowd and towers into the clouds of  Arusha town and is about 70 km from the majestic Mount Kilimanjaro.

Day 2: Miriakamba Hut to Saddle Hut. A short hike up to the summit of Little Meru.

Day 3: Saddle Hut to Summit (starting at the latest 02:00 AM), Summit to Miriakamba Hut.

You might be able to persuade the ranger to let you remain at Saddle Hut between the third and fourth days and descend directly from Saddle Hut to Momella Gate, depending on how you’re feeling, the availability of beds in the huts, and how the ranger is feeling. If you plan on climbing Mt. Kilimanjaro following Mt. Meru, this is definitely the best option for acclimatization. In return for avoiding having to trek the vast distance between Miriakamba Hut and Momella Gate, we were allowed to do so. 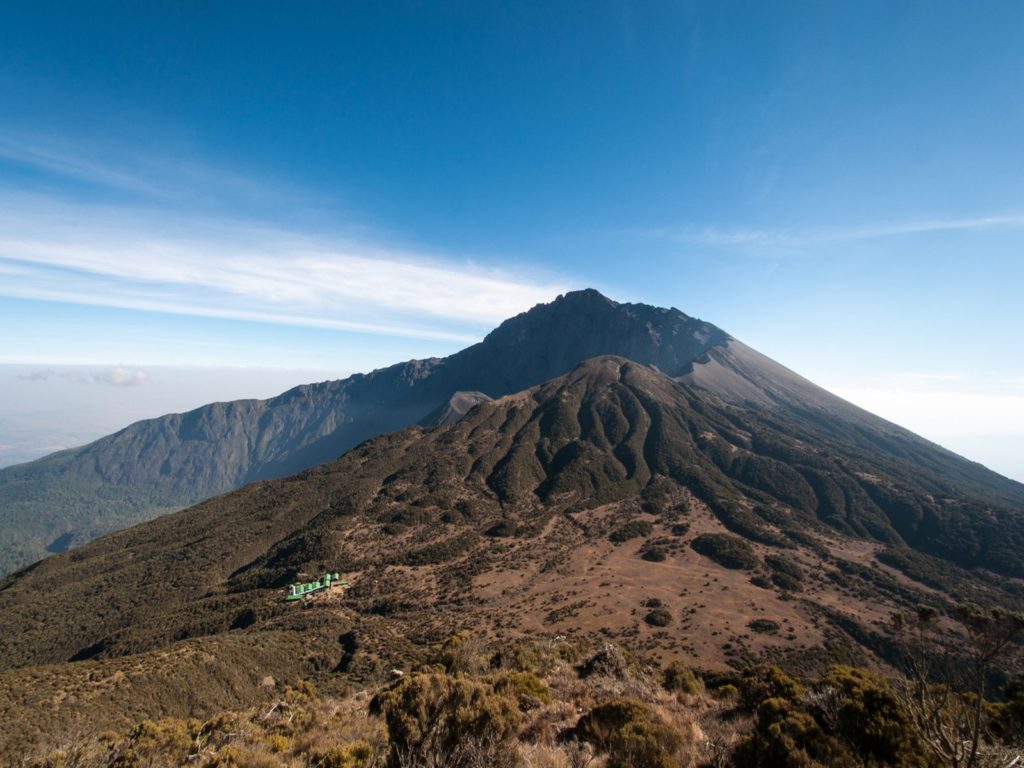 Day 2: Miriakamba Hut to Saddle Hut. A short hike up to the summit of Little Meru.

Day 3: Saddle Hut to Summit (starting at latest 02:00 AM), Summit to Momella Gate

The 3-day hike offers the same amount of acclimatization going up as the 4-day hike. However, it is probably harder on your knees because of the very long ascent and descent on the final day.

How many days does it take to trek Mount Meru?

Trekking Mount Meru takes at least 3 days and utmost 4 days from the base of the mountain, to the summit, and back. To allow for appropriate acclimatization, it is suggested that you walk to the top of Mt. Meru for at least four days, which is unusual because the three-day hike peaks on the same day, implying that the amount of acclimatization is identical! The major advantage of four days is that it allows you to break up the descent into smaller segments. If you choose, you may complete the hike in three days, but not less.

How much does it cost to climb Mount Meru?

Costs for Mt Meru hikes are organized by trekking organizations in both Arusha and Moshi. For four days, most charge between US$450 and US$800. However, for approximately US$400 for a four-day, three-night journey, you can do it all on your own. You’ll also need to budget for food (which you should buy in Arusha because there’s no place to stock up near the park), as well as transportation to and from the park.

Mount Meru has only one designated route that leads to the peak of the Mountain. If you want to reach the summit of Mount Meru, you have the sole option of using the Momella Route, which is the official route on this mountain located in Arusha, Tanzania.  Depending on whether you are using the 3 days option or the 4-day option as the route measures 8.7 miles(14km) long for the 3 days route variation and 11.8 miles(19km) long for the 4 days variation from the base to the summit. Read more about the Momella Route.

The Mount Meru park rangers are paid a fixed monthly wage and get no additional compensation from the park for guiding, therefore tips are greatly appreciated. park rangers and porters here do not have high expectations when it comes to tipping here, unlike the Mount Kilimanjaro guides and porters.

If this happens while you’re already on the path, sort out a plan to keep going and report them to the nearest headquarters after you’ve reached the bottom.

A gratuity of around US$50 per group is appropriate for a good guide who has finished the entire journey with you. Tips for the cook and porter should be approximately $30 and $20, respectively. When dealing with high-end businesses, tip extra.

Porters and Guides for Mount Meru

It is necessary to hire a ranger-guide, to climb Mount Meru which may be arranged at Momella gate or a few days, weeks or months before entering Tanzania to avoid the last-minute rush and help you plan earlier. Unlike on Kilimanjaro, guides on Meru are ordinary park rangers whose job is to help (and protect) you if you come across any of the park’s buffaloes or elephants, rather than to show you the way (though they do know the route). If there aren’t enough rangers, which happens frequently, you could wind up in a bigger group than you expected.
At Momella gate, porters are also offered as an option. The fee is US$10 per day per porter, payable directly to them at the end of the hike.

Accommodation For a four-day trek, there are two sets of four-bed bunkhouses (‘huts’). They’re regularly sold out, especially during the peak seasons of July–August, and December–January, so plan early. It’s also a good idea to bring a tent (though you’ll still have to pay hut fees if you camp). Bring your own stove and fuel to each bunkhouse, which includes cooking and eating space. The two accommodation campgrounds on Meru are

What is the highest peak on Mount Meru?

What is Mount Meru’s height?

The height of Mount Meru measures 4,566 meters above sea level

The fifth-highest peak in Africa is Mount Meru (depending on your definition). One of the highest cliffs in Africa, its rim-lined crater drops 1,500 meters to the crater floor.

When was Mt. Meru first climbed?

Despite ongoing debate, it is generally accepted that either Fritz Jaeger or Carl Uhlig climbed Mt. Meru for the first time in 1904.

What hiking routes are there on Mount Meru?

Unlike Mount Kilimanjaro, Meru has only one designated summit path, known as the “Momella way.”

The 4 day (11.8 mile) Mount Meru trek is the lengthier and more popular alternative, while there is a 3 day (8.7 mile) version as well.

Is Meru a volcano or not?

Yes, Mt. Meru is a stratovolcano that is active yet dormant. a volcano of the same kind as Mount Kilimanjaro (see how Kilimanjaro formed).

When Meru first burst into existence around 500,000 years ago, the entire eastern side was torn apart, giving the horseshoe-shaped rim its characteristic appearance.