Ascending the mountain in 6 hours will reward you with spectacular views of the Great Rift Valley and volcanic structures in the Ngorongoro highlands. It’s an exciting walk that begins at daybreak. Remember, this is an active volcano, and when there are eruptions, the peak is restricted to climbing.

Lake Natron, which lies at the foot of the mountain, is claimed to be the sole breeding place for the endangered Lesser Flamingos that reside in the Great Rift Valley, as well as the world’s most significant breeding site, accounting for 75% of the global population.
The soda lake is located at the lowest point of the Great Rift Valley in East Africa. It is relatively shallow, measuring less than three meters deep, and its breadth changes depending on the water level. Evaporation creates significant alkalinity in the lake mud, which may reach temperatures above 40 degrees Celsius.

WHAT TO WEAR WHEN CLIMBING MOUNT OL DOINYO LENGAI 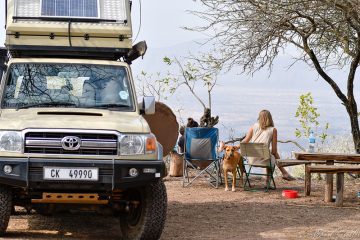 Ol Doinyo Lengai, East Africa’s sole active volcano, is located south of Lake Natron and it erupts every twenty to forty years.
The most recent major eruption occurred in 1966, with minor ones occurring in 1983, 1933, and 2007. Ol Doinyo Lengai is one of the few volcanoes on the planet that does not contain sodium carbonate or potassium, and it is the only one that releases natrocarbonatite lava. This lava has practically little silicon, and its temperatures, which range from 500 to 600°C, are lower than those of other lavas.

The natrocarbonatite lava has the appearance of flowing black oil and becomes white when it comes into touch with damp things. When it rains, this whitening occurs practically instantly. There are two peak craters on the mountain. The southern one is dormant and surrounded by volcanic ash. The northern summit crater, which has a depth of nearly 200 meters, is the most active. Mount Lengai may be climbed to the summit and occasionally all the way down to the crater, close to the molten lava flows’ rim.
Mount climbs on Oldoinyo Lengai are typically scheduled around midnight in order to reach the peak before daybreak.

Ol Doinyo Lengai’s lava is one of a kind

Ol Doinyo Lengai is well-known among geologists for spewing natro-carbonatite lava, and it is the world’s only known active volcano emitting this type of lava. It is more easily identified by its color, which is thinner and more fluid than the flaming red lava rich in silicate minerals: The lava of Ol Doinyo Lengai is black!
Because of its composition and the very low temperature at which it erupts, it has a unique black color. While basalt-based lava spewing from volcanoes reaches temperatures of over 1100 degrees Celsius, the cough of the Mountain of God appears to be very chilly at around 510 degrees Celsius.
The lava becomes white when it comes into touch with moisture.

Is there snow on Ol Doinyo Lengais Peak?

No, with your naked eyes from afar, you would assume Ol Doinyo Lengai’s summit is covered in snow, but it’s really black lava turning white.
While you may climb the mountain, be prepared for a difficult hike: once wet, the decomposed lava rocks become brittle and shatter quickly, making the steep journey much more difficult.

Engare Sero Footprints Near the Mountain

Scientists uncovered hundreds of old footprints in a mudflat near the town of Engare Sero, just a few kilometers from the peak. The scientists dubbed one section the “dancing room” because it has so many imprints.

Lake Natron is the most strikingly beautiful of all the Rift Valley lakes south of Turkana, located in the Rift Valley on the eastern edge of the Ngorongoro Conservation Area. This primordial alkaline sump, which is over 60 kilometers long but only a meter deep, is known for its caustic and extremely viscous waters, which are surrounded by a layer of volcanic ash and salt, as well as a few isolated swamp patches supplied by boiling hot springs. Although there is some big wildlife in the region, Natron is most renowned for being the only known breeding habitat for East Africa’s 2.5 million lesser flamingos, who cluster in an inaccessible portion of the lake between August and October.

During the winter season in Europe, Natron attracts up to 100,000 migratory waders.
The primary attraction near the Natron is Ol Doinyo Lengai, the Maasai ‘Mountain of God,’ a classic volcano rising more than 2 kilometers above the surrounding Rift Valley floor to a height of 2,960 meters. Lengai, East Africa’s most active volcano, has erupted at least a dozen times in the last 150 years and has had almost continuous low-key activity for the past century and a half, the most dramatic of which occurred in 2007 when it emitted an ashen steamy plume that traveled nearly 20 kilometers downwind.

The difficult ascent of Lengai, which is best done overnight to minimize sun exposure on the dark, shadeless slopes, is a favorite walk among fit and daring visitors, at least while the volcano is calm. It should only be attempted with the assistance of a knowledgeable local guide, and it is best to leave soon before midnight to get at the crater rim in time for daybreak.

Yes, Lake natron calcifies dead animals, the same way Egyptians preserved dead bodies in the past by mummification. When animals die and fall in the red waters of lake natron, they are preserved by the sodium carbonate minerals and other salts found in the alkaline lake.

Why is lake Natron red?

The reason why lake natron appears red is because of the vermillion shade that comes from the haloarchaea that largely infest the highly alkaline waters. These are, microorganisms that flourish in its salty waters and they are more visible when the water level is especially low during the dry seasons.

How do flamingos survive in Lake Natron?

Flamingos feed on these microorganisms found in the lake that is why they flock to Lake natron. Also, their bodies have adapted to the pH levels of Lake Natron.

No, Ol Doinyo Lengai is a stratovolcano located near the southern end of the East African Rift in Tanzania. It is notable for its peculiar low-temperature carbonatitic lava. The morphology of the lava flows is compatible with a composite volcano, despite their rapid movement and low silica concentration.

A shield volcano is defined as a wide volcano with steeply sloping sides. Shield volcanoes are generated by a series of low-viscosity magma flows.

What type of volcano is Ol Doinyo Lengai?

The volcanoes of the Great Rift Valley, which spans across East Africa, up to the Red Sea, and on to the Dead Sea, are generally extinct, while some, such as Menengai near Nakuru, which has a massive crater measuring 12 km by 8 km, and Longonot (which may have erupted in 1863) have minor steam vents. Mount Kenya/Kirinyagga has a jagged form owing to erosion of the outer cone, which has left the remnants of the larva plug.

Ol Donyo Lengai appears to be the only one that has recently erupted; Ol Donyo Sabuk appears to be nothing more than a big hill, not a volcano.

North of Kirinyagga, there’s a massive old cinder field, and Menengai’s basin has the same type of thing—a it’s pain to walk through!

Are there volcanoes in Africa?

There are a lot of them, and they’re usually the most intriguing. Cameroon’s Mount Cameroon spews a lot of carbon dioxide into the atmosphere (Lake Nyos). Natrocarbonatite lava is produced by Ol Doinyo Lengai (comes out black and turns white when it cools). In the Rift Valley, Dallol is a very acidic sequence of oddly colored volcanic lakes. If you’re interested in African volcanology, the list might grow rather long.

What are some active volcanoes in Africa?

‘Erta ‘Ale in Ethiopia, as well as Kilimanjaro, Nyamuragira, and Nyiragongo in Zaire, and Ol Doinyo Lengai in Tanzania, are expected to be the most active.

Which ones are the most interesting volcanoes all over the world, and why is that?

Ol Doinyo Lengai is our favorite. It’s the only volcano in the world that spews natrocarbonatite lava. That kind of lava was found in several ancient volcanoes, but only Ol Doinyo Lengai remains. The lava is quite hot (although you’ll still die if you jump in), and it erupts with a black tint instead of red. The lava turns white as it cools. On the summit, there are a lot of interesting hornitos, and the lava normally simply dribbles.