The Umbwe route, thanks to its fast ascent to high altitude, and sometimes lacking acclimatization stages, is one of the most challenging routes used to approach mount Kilimanjaro’s summit.

Traffic on the Umbwe route is very low as very few mountain climbers choose this route as their summiting trail. Relatively, chances for summit success are considerably lower as compared to the other routes.

Umbwe is considered to be a very demanding and challenging route, one that should only be attempted by highly skilled and experienced climbers who believe in having a great ability to acclimatize quickly to high altitudes.

This route is a lot more direct, steep, and short, approaching the summit from the southern side of the Mountain. The route’s trail turns Eastwards towards Barranco Camp and crosses underneath Mount Kilimanjaro’s Ice Field to the South at Barranco Camp on a path known as the Southern Circuit before reaching your last camp, Barafu, from where you will summit.

Coming down the Mountain, the trail takes a different approach, using Mweka Route for the descent.

In the past, the Umbwe Route used to hold the title of being the shortest, most direct, and steepest route for summiting Mount Kilimanjaro, up until the opening of the Western Breach Route.

Initially, the Umbwe Route used the steep and rocky Western Breach plus the Arrow’s Glacier trail to reach the summit but things took a turn when the tragic rock-fall in 2006 became proved fatal by killing three mountain climbers. The route was closed down for a year and reopened in 2007.

Still, the route is a hard challenge that is very risky by today’s standards hence many operators including Tranquil Kilimanjaro do not use this route as an option.

Umbwe Route was revisited and instead, on the second day, it joins in the Machame Route trail tracing the southern circuit towards the summit. Meanwhile, the descent takes a different course from the ascent, choosing the Mweka Route for descending the mountain.

Where is the Umbwe route located?

The Umbwe route ascends vertically taking a northerly direction to Barranco Wall where it joins in with Mount Kilimanjaro’s Shira, Lemosho, and Machame routes.

The main difference between the six days itinerary Umbwe route and seven days Umbwe Route itinerary is an additional day for acclimatization to Barranco Camp. 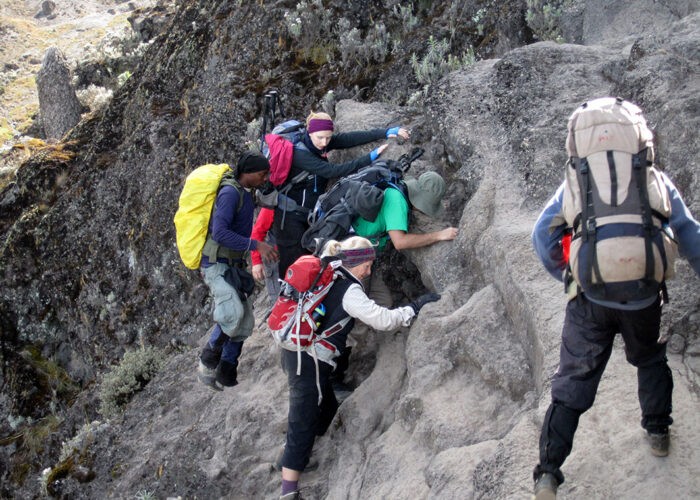 The Umbwe Route is subdivided into two parts that are enjoined. The first part takes two days of trekking, there are few people on the route but traffic starts to build up as soon as the trail joins the Machame climbers trail at Barranco camp.

How do I prepare for the Umbwe route?

Depending on your main goal, preparing for Umbwe Route is pretty much any physical activity you participate in as you train to climb Mount Kilimanjaro. The intensity of your training will depend on whether you want to reach the summit or just hike for a few days.

How difficult is the Umbwe route?

The main and possibly only reason that makes the Umber Route difficult is the steep, almost vertical slope that demands a lot of effort to trek up to the summit of Mount Kilimanjaro.

The climb might take fewer days and the distance shorter but we would recommend experienced climbers to use this route even though it is not that technical to tackle it. This route demands climbers to be at their best physically and mentally as normal trekking days have a duration of 6 to 8 hours of trekking with an increased altitude of 900m (2953 ft)– 100m (3280 ft) daily. Judging by the difficulty of Umbwe Route, you need to be capable of trekking many days on difficult terrain and sometimes harsh conditions.

Some special equipment like ice axes and crampons may be needed sometimes in case of extreme weather and high altitudes.

As for the last days of climbing ar the climb wears you out, you will have to be resilient and have good mental and physical stamina.

When should I climb the Umbwe route?

The best time for using the Umbwe Route is between the months of January – March and June – October. Even though you can climb Mount Kilimanjaro all year round, the wetter months of May and November are colder and need waterproof gear.

What should I pack and what equipment do I need?

To climb Kilimanjaro via Umbwe Route you will need all the necessary mountain climbing gear for Kilimanjaro that should include the compulsory waterproof gear and other necessities like, headlamps, hiking boots, personal medication, sunglasses.

You can find the full Kilimanjaro gear List here

How many days to climb Kilimanjaro on the Umbwe Route?

The Umbwe Route itineraries vary with the number of days. We offer the Umbwe route on 6 days or 7 days climbing.

The is also an option of taking a 5-day Umbwe Route package but we do not recommend it as it bears very low summit success rates because it excludes the acclimatization days so chances of suffering severe mountain sickness are very high.

How to get to the Umbwe Route?

There are many sources for finding the best flights from U.K U.S.A, Canada, France, Germany, Australia and the rest of Europe to Tanzania, when you reach to the airport we will provide airport transfers to your hotel room and back. We will also provide transport to the gate where you will begin your climb and the tranquil Kilimanjaro crew will lead you to the summit via Umbwe Route.

What are the climbing requirements for the Umbwe route?

Umbwe Route requires climbers of great fitness and experienced ability especially if you are aiming to reach the summit, whereby very strict planning and vigorous training is required.  Extra time or day for acclimatization is required for Umbwe Route trek to minimize acclimatization.

What is the success rate of the Umbwe route?

The success rate of Umbwe Route is relatively low compared with the other routes as it falls between 60%-70% for the 6 days Umbwe route or 7 days Umbwe route packages and 50% for the 5 days Umbwe route itinerary. This is due to the fact that it is a difficult route to use for climbing mount Kilimanjaro and should be used by skilled/experienced climbers. In order to achieve success in summiting via Umbwe Route, you should go for the extra acclimatization day.

What permits do I need?

What is the scenery like on the Umbwe route?

In comparison to the other routes, the Umbwe route can be termed as less scenic because of the less time taken to go up the mountain ascend. It still offers beautiful sceneries as you go through each and every vegetation zones on your way up.

How busy is the Umbwe route?

The Umbwe Route has low traffic since it is not popular amongst climbers. The route is not busy compared to the other routes a factor that can be contributed to its difficulty level and success rate for summiting Kilimanjaro.

What is the accommodation on the Umbwe route?

The type of accommodation offered on Mount Kilimanjaro, via the Umbwe route is exclusively camping. The typical itinerary includes camping equipment that includes tents, sleeping bags, sleeping mat and pillows. Your porters will always be carrying your tents, setting them up a few hours before you arrive at your next campsite after your day’s trek.

How many days does the Umbwe route take?

The Umbwe route usually takes 5-7 days to the summit of Mount Kilimanjaro. Even though it might take a brief 5 days to summit, the recommended number of day that include extra acclimatization time takes 6 or 7 days.

How much does Umbwe route cost?