Kilimanjaro and other best star gazing destinations from around the world

Kilimanjaro and other best star gazing destinations from around the world

Kilimanjaro as a star gazing destination might come as surprise, but believe it or not, it is one of many people’s favourite star gazing spots in the world. The vastness of the cosmos is both breathtaking and sobering; the stars serve as a constant reminder that billions of people have lived “on a mote of dust, suspended in a sunbeam,” in the words of astronomer Carl Sagan. However, as our population expands, light pollution also does so, obscuring the sky and everything above it. Fewer than 500 stars may currently be seen in many metropolitan locations.

Fortunately, this is not the case in some locations, where up to 15,000 distinct pinpricks of light may be observed. The problem? They are not really practical, but that is sort of the purpose.

Algol in the constellation Perseus, Aldebaran in Taurus, and Alcor in the tail of Ursa Major, often known as the Great Bear or Big Dipper, are just a few of the stars that humans can see at night that have Arabic names. Due in large part to the heat of the day forcing many desert residents to move only at night, the Arabians were superb astronomers. As their source of light and guiding lights for navigation, they formed a close bond with the moon and the stars.

The absence of light pollution and clear nights provide the ideal conditions for viewing one of the universe’s greatest gifts: the starry sky.

Discover the top 10 places in the world for spotting the stars.

Tents camping under a starry sky on one of the paths along the Lemosho and Shira routes, in the Kilimanjaro National Park.
The highest mountain in Africa, Kilimanjaro, is 5,895 meters high and one of the toughest treks for adventure travelers. On the way up, the routes to the summit are sometimes several days long and include overnight stops at several campgrounds. One of the methods that is most strongly advised is using the Lemosho route to ascend from the west side of the massif. Every night when the stars illuminate the Eastern African heavens, such an adventure pays off handsomely.

The Canary Island of La Palma is sometimes referred to as the “Isla Bonita” because to its beaches, tropical vegetation, and volcanic cones like the Caldera de Taburiente (2,426 m), which is located inside the National Park’s limits. There are several ways to get around Roque de los Muchachos, one of the most comprehensive telescope centers in the world, and its well-known astronomical observatory, amid this rocky natural reserve. La Palma’s beautiful heavens make for excellent astronomy and star gazing at night. 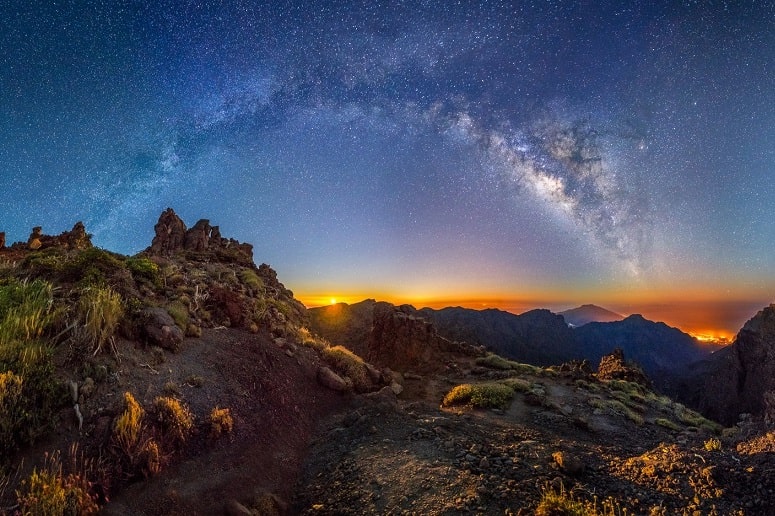 3. Stars and the Northern Lights in Tromsø (Norway)

A typical house on a Norwegian fjord close to Troms could be among the world’s top locations for seeing the stars and the Northern Lights.
Is there anything more lovely than a sky filled with stars? A starry sky with the Northern Lights, indeed! In the Nordic nations, this color exhibition takes place from October to March. One of the greatest sites to observe these enchanted water paintings is in the vicinity of Troms, a municipality in northern Norway, which is accessible by a 3-day hike from Oldervik, one of the best spots in the world to view the aurora borealis and the stars. 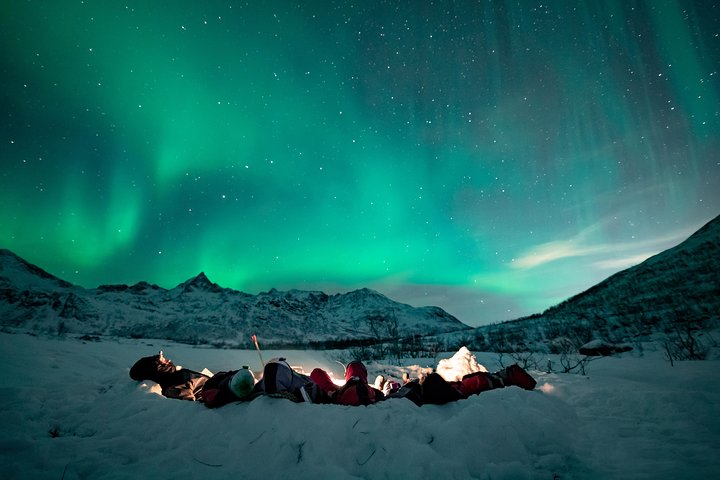 On the Hawaiian island of Mauna Kea, a dormant volcano, are where the astronomy observatories are situated.

Hawaii’s islands enjoy a fortuitous location that makes it possible to view one of the planet’s most stunning skies, deep within the Pacific Ocean. The Mauna Kea observatories are regarded by many as the greatest observation facility for astronomy in the entire world and are located atop “Mauna Kea” (White Mountain), a dormant volcano on the island of Hawaii. There are several routes to ascend to the observatories (4,205 m), including on foot, by bicycle, or even by all-terrain vehicle. 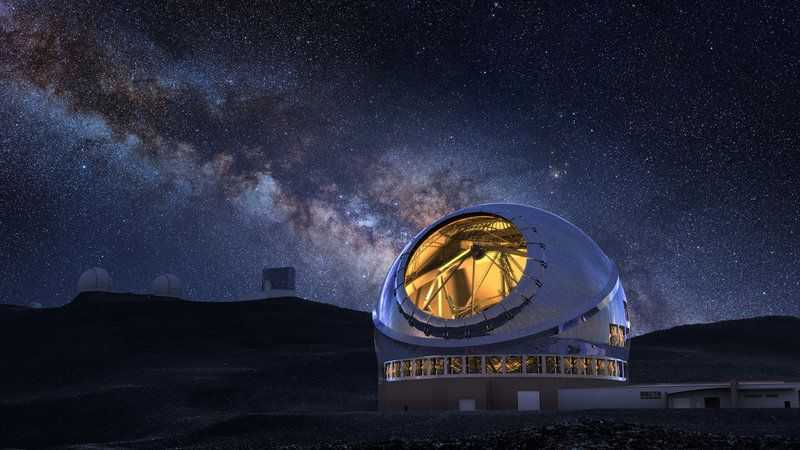 On a starry night, the Beqaa Valley and Zahlé may be seen from the Qurnat as Sawd’ Mountain for the greatest astronomical views.

The dry terrain of El Qurnat as Sawd, Lebanon’s highest mountain (3,088 m), is where you may take the nighttime trek to the summit and comfortably see the light from the stars. Approximately 20 kilometers from the Oyoun Orghosh pass, you may go on an expedition that you can cap off with a delicious tabbouleh dinner to replenish your energies. There is where the legendary 1,001 Nights will take place (a medieval compilation of traditional tales from the Middle East). 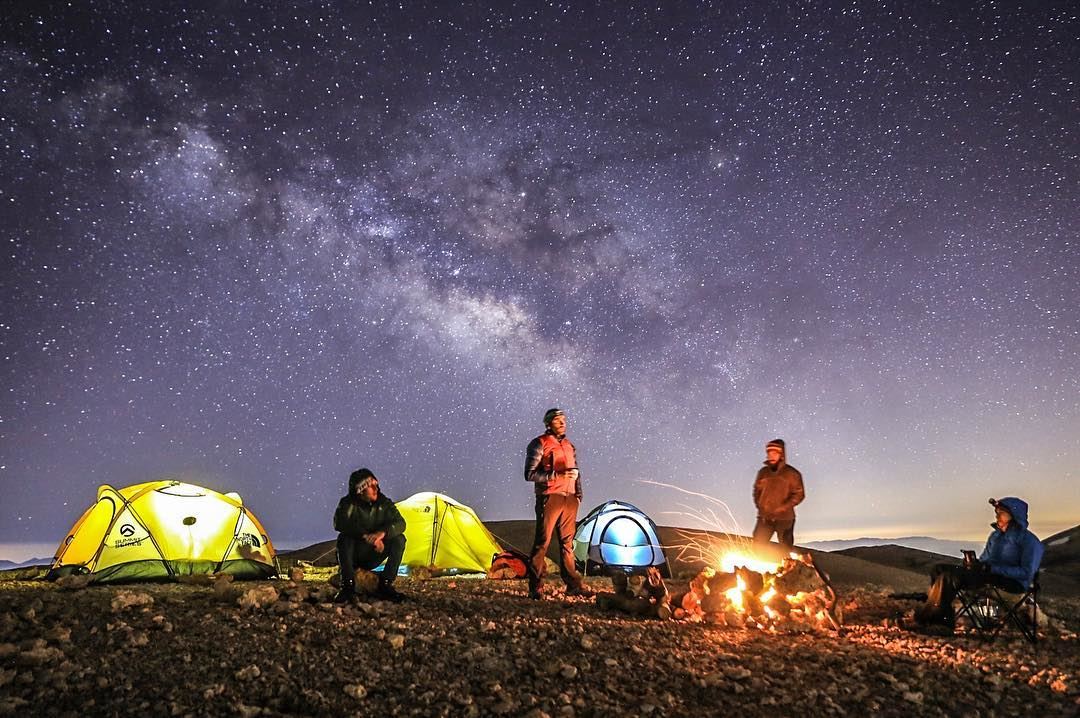 One of the Atacama Desert’s natural wonders is The Three Marias, which is located near El Valle de la Luna.

The Atacama Desert’s desert sky, which have been rated as some of the clearest in the world, are perfect for contemplating the wonder of the stars and the setting sun. The “Valley of the Moon,” also known as “El Valle de la Luna” (Valley of the Moon), is a popular destination for mountain bikers in the Cordillera de la Sal because of its similarity to the lunar scenery. We may go from San Pedro de Atacama in the direction of the Three Marias, traveling through areas like “Quebrada Cari,” before spending the entire night stargazing. 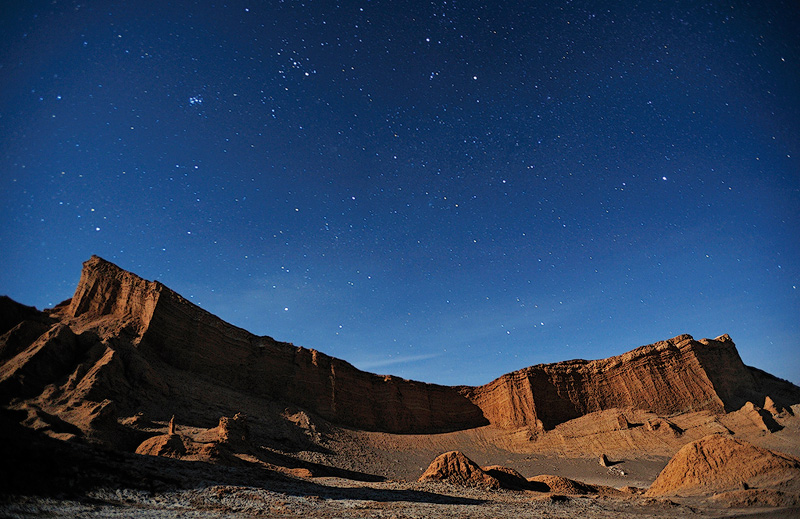 The rugged Monument Valley, which is situated between the states of Utah and Arizona, is the most representative image of the Navajo Reserve.

“Monument Valley,” a natural rock museum, is located in the middle of the Navajo Native American Reservation. To enjoy the best panoramic views of the valley, you may go on a short day trek like the “Wildcat Track” on the Colorado Plateau, which is situated between Utah and Arizona. There are only a few kilometers on this trail. There is nothing better than ending the day with an astronomy tour in one of the best places on Earth to see the stars.

The view from the last section of the French Pyrenees route leading to Pic du Midi de Bigorre is out of this world.
The French Hautes-Pyrenees are home to the Pic du Midi de Bigorre (2,876 m), which has an incredible viewing point and an astronomical observatory at the top. Mountain biking along the legendary Col du Tourmalet, followed by a detour to the summit, is one of the most popular ways to reach the peak in the summer, in addition to the cable car that departs from La Mongie. To be able to view the Milky Way and the stars at night, we advise choosing accommodation nearby. 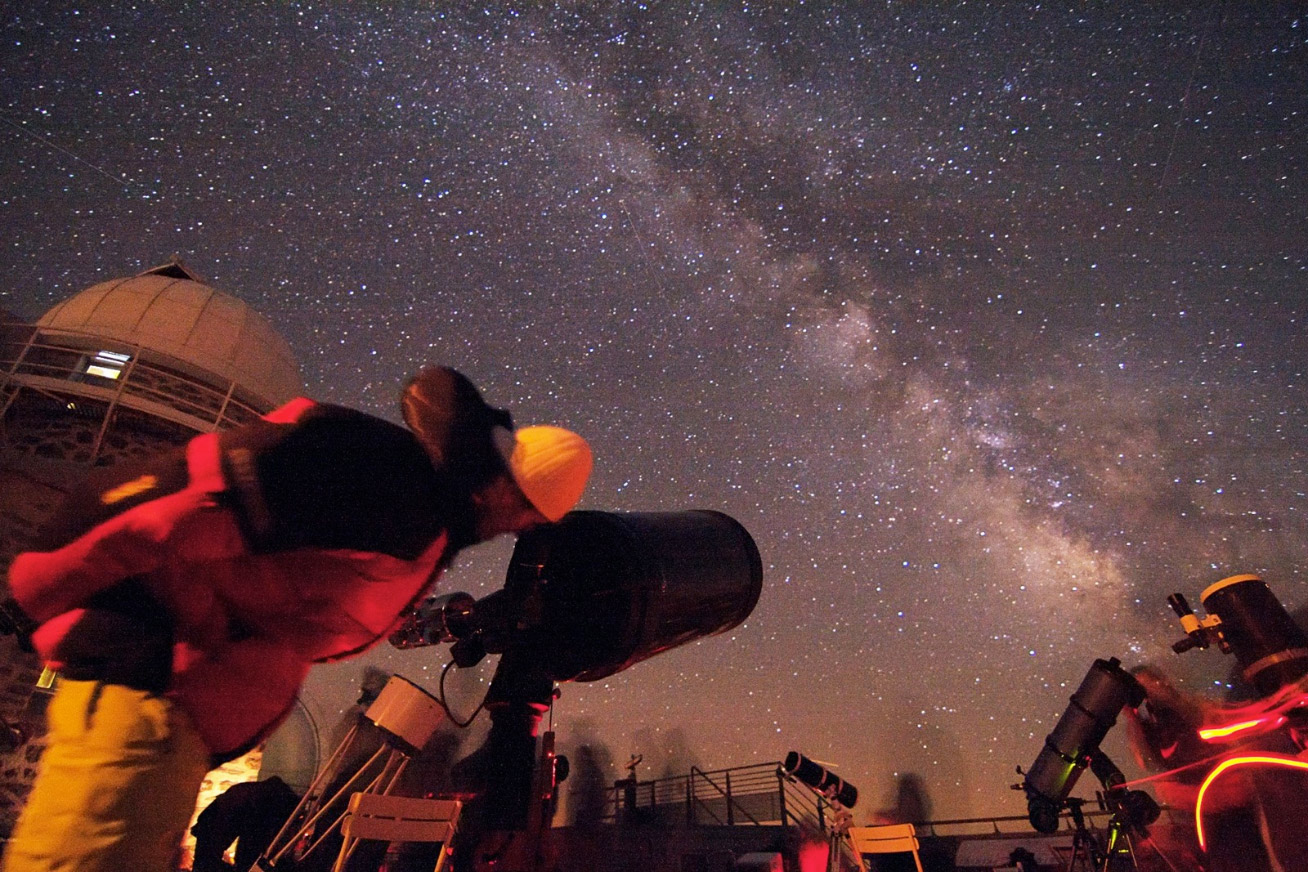 9. The stars within reach in Annapurna (Nepal)

One of the greatest vantage spots in the Himalayas, Pedhi, gives you a stunning view of Annapurna.
One of the Himalayas’ most recognizable mountain ranges is Annapurna. There are several roads that have been carved out across this hilly area, such as the one that connects Shree Kharka and Pedhi, which is the ideal vantage spot with views of Annapurna and Chulu West. A fascinating journey via Buddhist monasteries and tiny towns where you may have a hearty bowl of Nepalese lentil soup before returning to the hostel and spending part of the night staring at the stars from the top of the globe, now more accessible than ever.

Related: See the top 10 highest mountains in the world 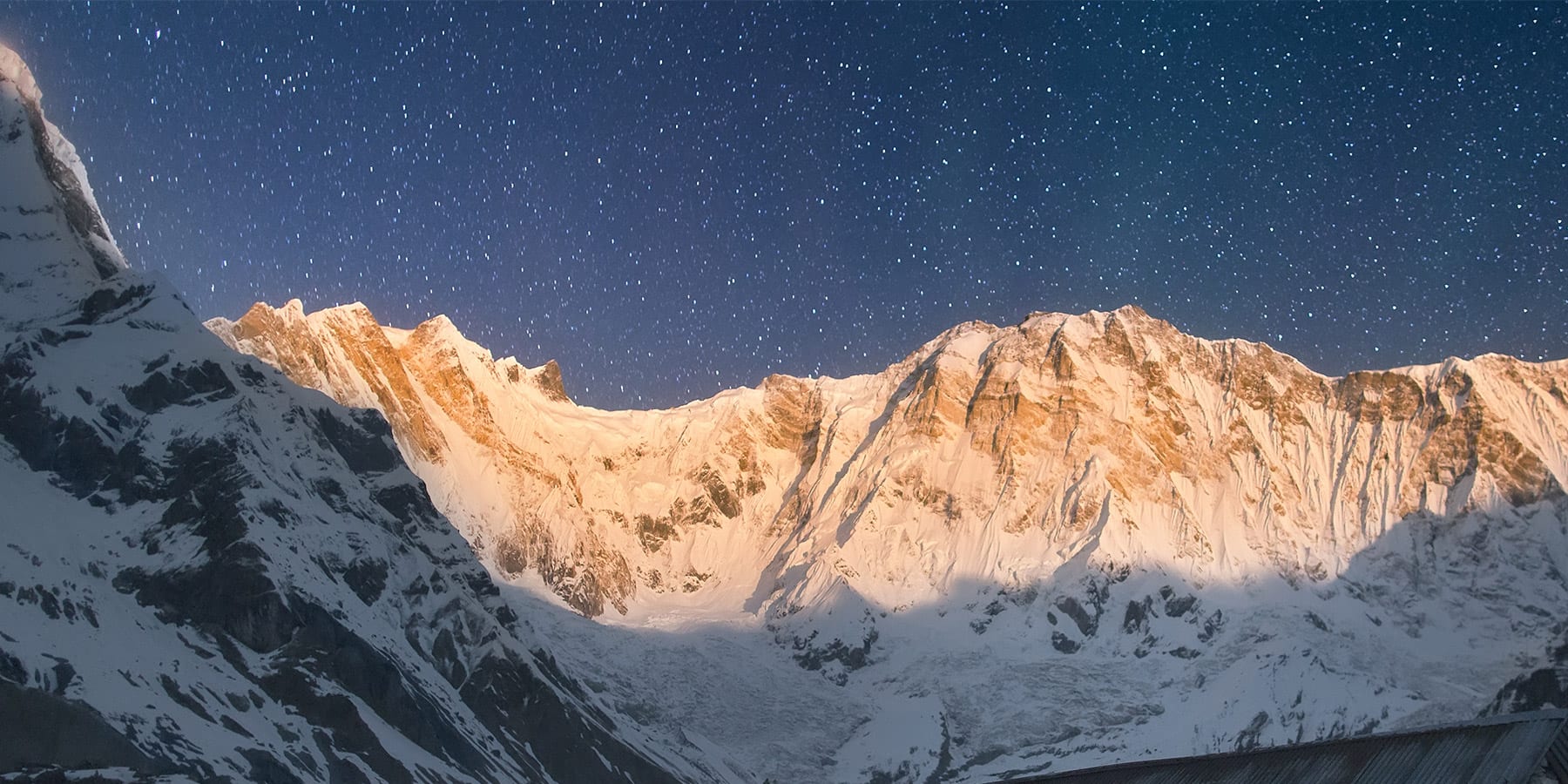 Adam’s Peak in Sri Lanka, one of the greatest sites in the world to view the stars with the naked eye, has a crimson sky.
The peak known as “Sri Pada” (Adam’s Peak) is situated on the island of Sri Lanka. One of them tells that Adam landed on the mountain after being expelled from Paradise and left a huge footprint that measured around 2 meters in length. Today, many religions consider Adam’s Peak to be a holy peak. A challenging nighttime expedition that is worthwhile for reaching the summit at daybreak while preserving the memories created while ascending more than 5,000 stairs beneath a starry sky. 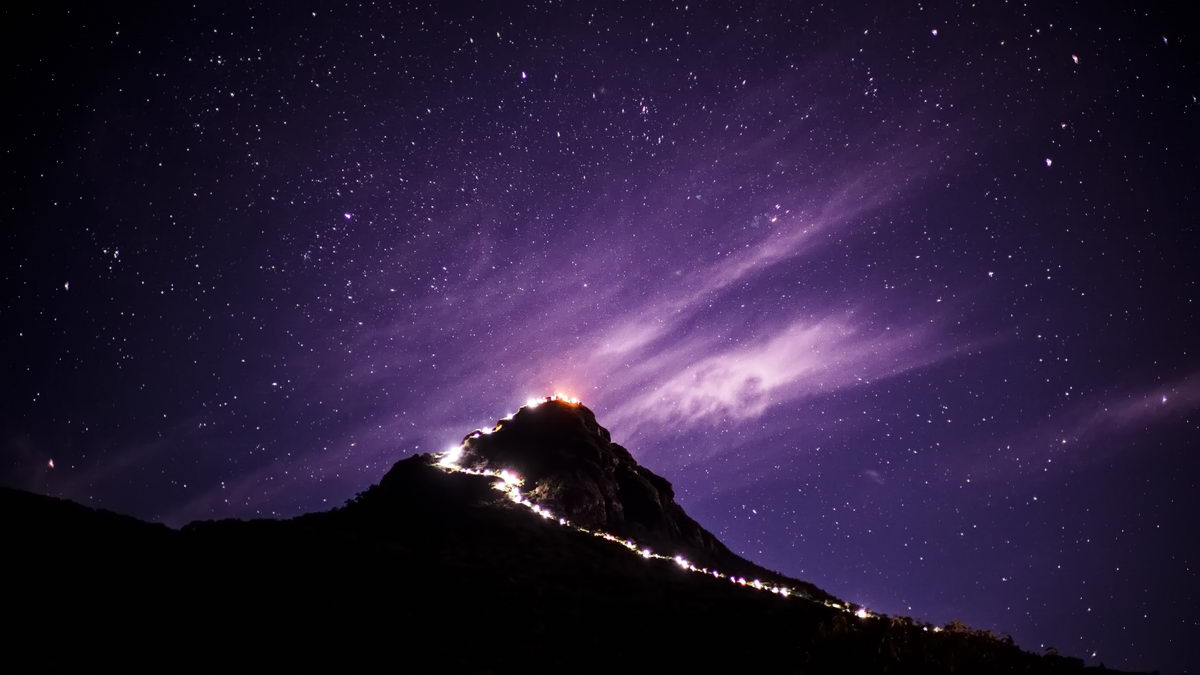 See also: 7 ways to hike under the full moon

TranquilKilimanjaro
Previous postClimbing Kilimanjaro in July, August, September, October and late June is one of the best time with great weather
Next postTop 4 tips to Stargaze and photograph the stars of Mount Kilimanjaro’s night sky

Top 4 tips to Stargaze and photograph the star of Mount Kilimanjaro's sky
Reply
[…] Read: Kilimanjaro and the top 10 stargazing destinations in the world […]