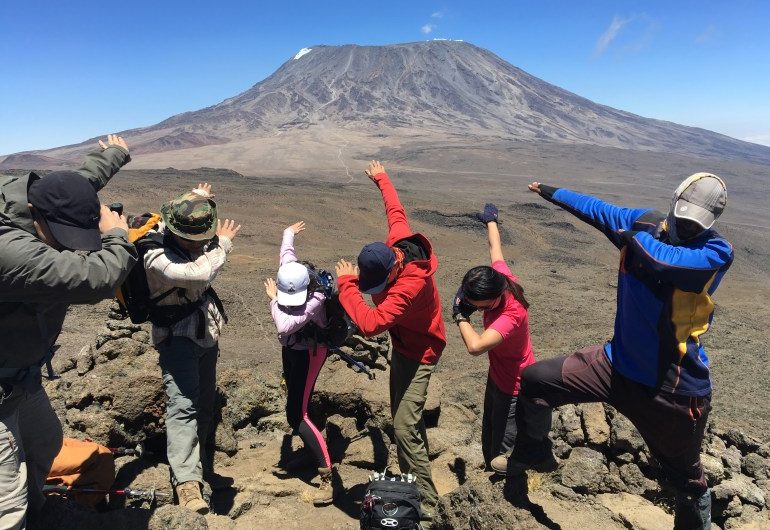 After a successful ascent to the summit of Mount Kilimanjaro, the Uhuru Peak, the guides and porters sing this celebratory song, which is followed by dancing and applauding.

“Jambo Bwana” has mostly been adopted as a hotel pop tune, with a tourist audience in mind.

As a result of their popularity, numerous other bands covered the songs, with varying degrees of success; the Safari Sound Band’s rendition, for example, is one of the most often played songs in East African tourist locations. In Disney’s “The Lion King,” the Swahili term “Hakuna Matata” appears to be a reference to the song’s chorus.

What does Jambo (Greeting) mean in Swahili/English?

Jambo is a Swahili greeting that translates to Hello or How are you? Alternatively, you can say Habari? They basically mean the same thing when greeting people in Swahili.

How to reply to the greeting, Jambo?

When someone greets you Jambo! You can reply, Sijambo, or just say Jambo back at them, with a smile of course.  Even better you can say Hakuna Matata! Hakuna Matata basically means, no worries, no problem, or everything is fine!

What does Hakuna Matata mean?

You have probably heard of the word “Hakuna Matata” from the movies and people that have visited Africa, but what does it really mean in English? Well, Hakuna Matata is a popular Swahili saying that means “No worries” or (literally hakuna: “there is no/there are no”; matata: “worries”.) It can also mean, “everything is alright”, or “everything is fine”.

Hello! Hello sir!
How are you? Very well!
Guests, you are welcome!
Kilimanjaro? No trouble!

“Hakuna matata” is an East African Swahili term that means “no bother” or “no concerns” and “take it easy.” (literally, hakuna, directly translated means “nothing” or “nothings”; Matata means “worries”). The Lion King, a 1994 Walt Disney Animation Studios animated film, popularized the term in the West with one of its most popular songs, which is translated as “no worries.” The song is frequently heard in Disney resorts, hotels, and other tourist destinations.

Boney M. released “Jambo—Hakuna Matata,” an English-language cover of Them Mushrooms’ song Jambo Bwana, in 1983. Reggie Tsiboe, Frank Farian, Cathy Bartney, Madeleine Davis, and Judy Cheeks joined Liz Mitchell on lead vocals for the song. The song was supposed to be featured in the band’s unnamed seventh album, which was set to be released in the fall of 1983. The song was eventually not included in the album (which was totally revamped and not released until May 1984 as Ten Thousand Lightyears) due to a low chart performance (No. 48 in the German charts).

The Lion King, a Walt Disney Animation Studios animated feature released in 1994, popularized the term by including it prominently in the storyline and dedicating a song to it. Timon and Pumbaa, a meerkat and a warthog educate Simba to forget about his unhappy past and live in the present. Elton John (music) and Tim Rice (lyrics) found the term in a Swahili phrasebook and wrote the song. It was nominated for Finest Original Song at the 1995 Academy Awards, and the American Film Institute later listed it as the 99th best song in movie history on a list of 100.

TranquilKilimanjaro
Previous postBest season to climb Kilimanjaro and go on safari
Next postMount Meru Adventure, the better alternative next to climbing Kilimanjaro

Brooke Baldwin climbs Kilimanjaro, comes back with 10 life lessons
Reply
[…] as the people who back me up. When our porters greeted us at camp on Night One, serenading us with traditional Kilimanjaro music, I realized it. To hold the tears at bay, I had to tighten my fists until I got to my tent and let […]