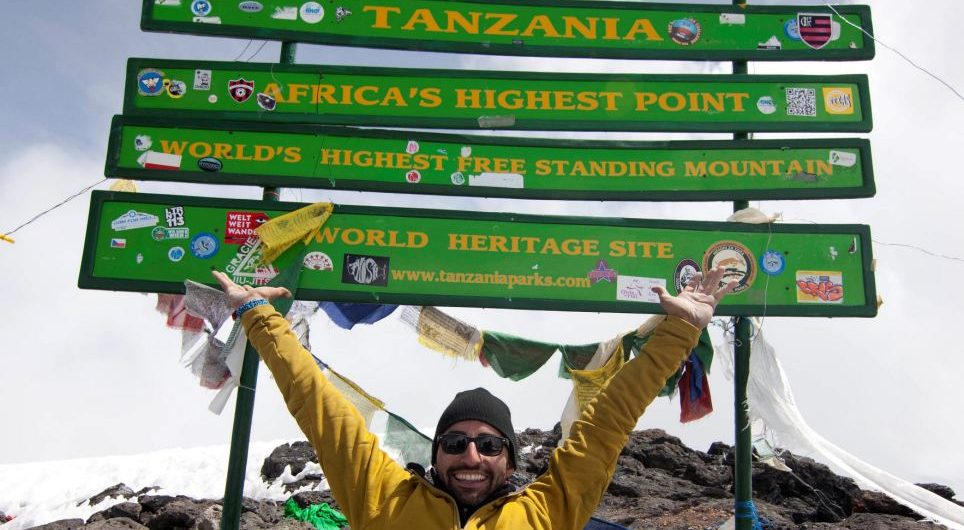 Scaling one of the planet’s highest peaks is a challenge most able-bodied individuals would struggle to do.

Spencer West did it with only his hands.

After a grueling, arduous, and awe-inspiring climb, the 31-year-old from Toronto, Canada, who lost his legs when he was five years old, reached the top of Mt. Kilimanjaro on Tuesday.
Mr. West was born with sacral agenesis, a genetic disease that caused his lower spine to be underdeveloped and his legs to be crossed all the time.

At the age of three, he had his legs amputated below the knees, and two years later, he had them severed below the pelvis.

Medical professionals said that the brave Canadian would never be able to function in society, but he has defied physicians his whole life.

He spent a year preparing to climb Africa’s tallest mountain without using his legs, and he started out on June 12 with closest pals David Johnson and Alex Meers.

Mr West had to hike through Tanzania’s rainforests, snowfields, and deserts for seven days, and he had to do 80 percent of the route on his hands, only using a custom-made wheelchair when the terrain permitted.

After a seven-hour walk, they arrived at the summit at 11:15 a.m.
Only half of those who attempt to climb the mountain succeed, and Mr West described the moment he reached the peak as “amazing.”

‘We glanced around and realized that we had made it after seven days of continuous climbing, 20,000 feet of our blood, sweat, tears, and vomit.

‘It was all worth it, even the bleeding fingers and blisters.’

Doctors informed Mr West as a kid that he would struggle to fit into society, but he has stayed adamant in proving them wrong.

Spencer West’s wheelchair was carried up Kilimanjaro by porters so he may use it when the terrain allows him to rest his bruised hands.

Mr West wore flip-flops on his hands to assist him navigate the uneven terrain on his journey up the mountain, which can be seen in the distance.

As he approaches the foot of Kilimanjaro, the brave climber beams as he prepares for the final ascent to the summit.

Spencer West spent a year in Toronto, Canada, preparing for the Kilimanjaro climb.

He needed to be sure his arms were strong enough to carry him up the 19,000-foot peak.

‘I set out to climb Mt. Kilimanjaro not just to redefine what’s possible for myself, but also to encourage others to overcome their own barriers and challenges, and to give back to communities that need our aid,’ he continued.

‘Achieving the summit of Mt. Kilimanjaro was the most intellectually and physically demanding thing I’ve ever done, but it reaffirmed the strong message of believing in yourself and others.’

‘This voyage would not have been possible without the help of so many individuals, and I am very grateful for their generosity.’

His astounding effort has earned almost £300,000 for Free The Children, a charity that helps thousands of Kenyans who are suffering from drought.