‘The higher I go, the closer I am to him in heaven’: Seven-year-old from Texas becomes the youngest girl to reach the summit of Mount Kilimanjaro, hiking in memory of her late father

‘The higher I go, the closer I am to him in heaven’: Seven-year-old from Texas becomes the youngest girl to reach the summit of Mount Kilimanjaro, hiking in memory of her late father 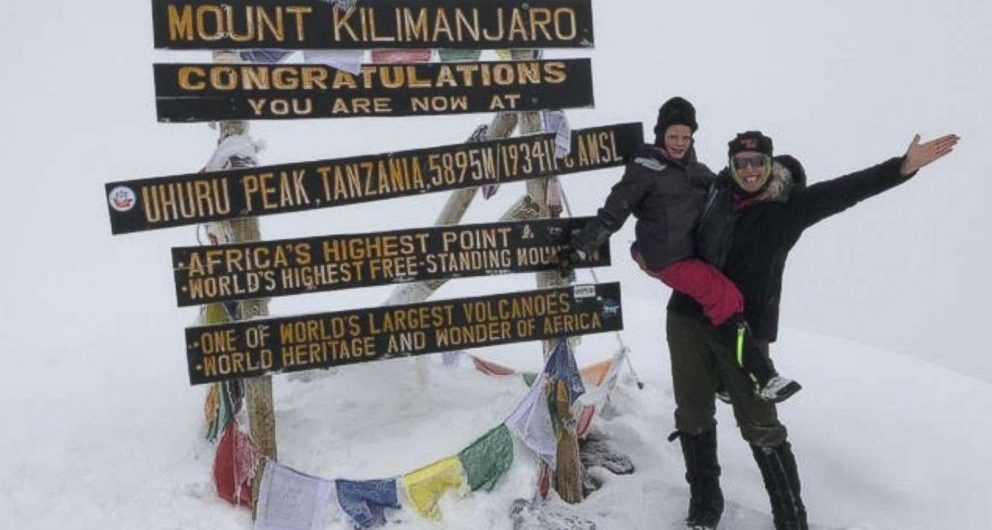 Montannah Kenney of Austin, Texas, ascended Mount Kilimanjaro at the age of seven.
Montannah became the youngest child ever to trek to the pinnacle of the 19,241-foot mountain with her mother, Hollie, 45, on March 16.

Montannah completed the climb in memory of her late father, who passed away in 2013.

Two more youngsters, both aged seven, walked to the summit, although one was at least 41 days younger.

Each year, just two-thirds of the 25,000 persons who attempt the climb succeed.

In honor of her late father, a seven-year-old Texas girl has shattered the record for the youngest female to reach the peak of Africa’s Mount Kilimanjaro.

According to a site that keeps track of Tanzania mountain records, Montannah Kenney walked to the summit with her mother, Hollie Kenney, 45, in March, when she was precisely 2,865 days old.

Montannah’s father went suddenly barely a week after her third birthday in 2013.

‘The higher I go, the closer I go to him in heaven,’ Montannah said ahead of their journey to the Austin American-Statesman.

Montannah got the notion to do this after she overheard her mother, a former professional triathlete, discussing with friends whether they’d ever attempt to climb Mount Kilimanjaro.

“Mommy, I want to do it too,” she said Hollie, according to ABC News.

‘I didn’t dismiss what she said, but I realized she didn’t realize the scope, so we began studying and watching videos.’

Officials in charge of the mountain normally demand hikers to be at least 10 years old, so Hollie figured she had a few years to prepare for the incredible task.

Then she discovered that officials provide special permits to younger expeditioners when necessary and that other children as young as seven had climbed Kilimanjaro.

She understood how important this was to her little daughter, so she acted quickly.

‘The next morning, I woke Montannah up and told her, ‘If you want this record, we have to leave while you’re still seven,” Hollie recounted.

‘I knew she had spring break in March, so we arranged the whole trip in a month and a half,’ says the author.

‘I was quite honest with her, explaining that people can get really sick, that we’d have to work very hard, and that it wouldn’t be an easy assignment,’ she continued.

In the six weeks preceding up to their African trip, Hollie and Montannah went on four- to eight-hour walks every weekend.

Hollie taught Montannah about what they’d be doing while they prepared.

‘She immediately equated the mountain being above the clouds with heaven, and that resonated with her,’ Hollie explained. ‘She was ecstatic at the prospect of moving closer to her father and asked if she would be able to visit him,’ I said.

Finally, they undertook the six-day trek to the summit of Mount Kilimanjaro, and Hollie said Montannah carried the thought of being closer to her father with her throughout the journey.

‘She was definitely seeking [for him] when we got to the top,’ Hollie added of Montannah’s reaction.

Hollie said of her little kid, ‘She never, ever questioned what she was doing.’

‘I asked Montannah every day if this was tougher or easier than she expected, and she always said, “Easier.”‘

Only approximately two-thirds of the estimated 25,000 individuals who attempt to climb Mount Kilimanjaro each year reach the summit.

Montannah and her mother reached the summit on March 16, barely two months before she turned eight.

Montannah is in second grade and lives in Austin, Texas, with her mother, who owns and operates a swim teaching business.