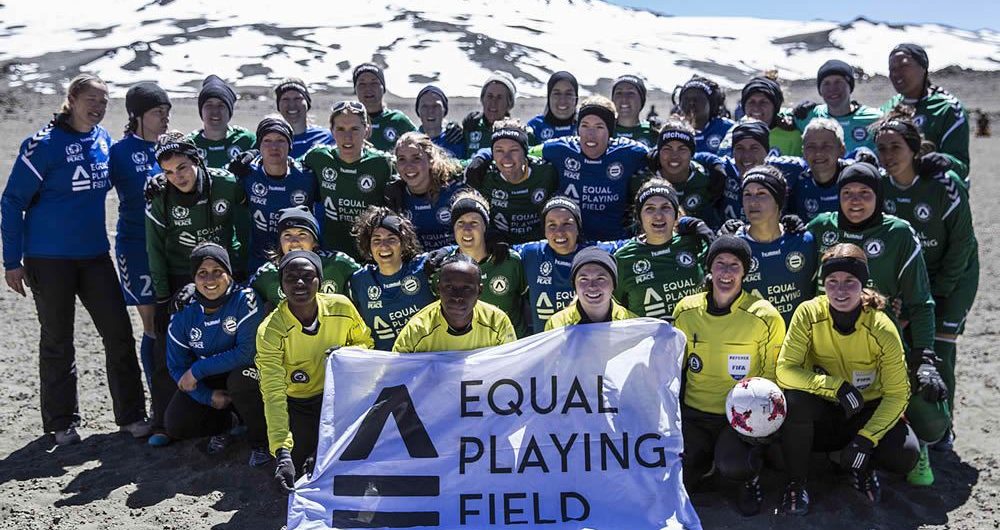 They came, saw, conquered the highest free-standing mountain in the world, and set a world record in the process.

A group of courageous ladies has ascended Africa’s tallest peak, with goalposts and nets in tow, to play a 90-minute football match on Mount Kilimanjaro, something many felt was impossible.
A team of 30 footballers from 20 different countries, including retired US international Lori Lindsey and former England midfielder Rachel Unitt, completed an 11-a-side competition at over 19,000 feet, an altitude never previously achieved.
The ladies, who range in age from 18 to 66, played in harsh circumstances on a volcanic ash field, using flour to outline the pitch and trekking poles as corner flags.

The game between Volcano FC and Glacier FC concluded in a 0-0 draw, although the outcome was irrelevant because the challenge’s main objective was to expose the inequity women experience in sports.
Erin Blankenship, an American defender and co-founder of event organizers Equal Playing Fields, said: “You can’t deny that you have a team of athletes competing at an altitude of over 19,000 feet. It makes no difference what gender they are.”

Who was referring the Match on Kilimanjaro’s crater

In August – 2017, Rwandan Salima Mukansanga officiated the world’s highest football match atop Mount Kilimanjaro.
A friendly match between Volcano FC and Glacier FC ended in a goalless draw atop one of Africa’s highest peaks.
In a game aimed at promoting women’s sports, it was only natural that the historic event be overseen by a Mukansanga referee.

Olympic champion Lindsey Vonn, who represented the United States in the 2011 World Cup and the 2012 London Olympics, was among the participants. She wanted to raise awareness about the challenges that women and girls experience when participating in sports.

Before leaving on the trip, she told CNN Sport, “I’m lucky to have had pioneers who came before me, but it’s our obligation to continue to make advances ahead for future generations.”
It’s not simple to play in thin air, which reduces physical performance.
FIFA, football’s world governing body, imposed a temporary ban on international matches at altitudes greater than 8,200 feet above sea level in May 2007, citing worries about players’ health and the “unfair” advantage given to acclimatized home teams. The suspension was reversed a year later.

Flamengo, a Brazilian club, said in 2007 that it will boycott high-altitude games after several of its players need oxygen during a match against Bolivia’s Real Potosi at 12,467 feet.
Glacier FC coach Dawn Scott remarked, “We made a vow before the game that it was all about finishing the game.”
“We called the substitutes who came on record makers because they’d be the ones pushing us on because you could see guys fading and requiring oxygen at the finish.”

The campaign for equality in women’s sports

Sportswomen have had to scale metaphorical mountains throughout history, and organizers Equal Playing Field believe the struggle is still going on, which is why they devised this world-record-breaking quest.

The issue over equality has dominated the news this year.
Serena Williams, the most successful female tennis player in the Open era, was the lone woman on Forbes’ current list of the world’s top 100 highest-paid athletes, released earlier this month.

With total earnings of $27 million last year, the 35-year-old American is placed 51st, $37 million less than Roger Federer, the most successful men’s tennis player in history, who is fourth on the list.
The US women’s national soccer team and US Soccer, the country’s regulatory body, reached an agreement in April to terminate a long-running wage and conditions dispute.
This was far from the only instance of international sportswomen taking a statement this year.

The Republic of Ireland women’s football team also vowed to strike in April. The Football Association of Ireland, according to the players’ representative, Stuart Gilhooly, is treating them like “fifth-class citizens.”
Meanwhile, the US women’s hockey team vowed to boycott the world championships unless a wage deal could be reached just three days before the event began.
Equal Playing Field’s mission statement said that it sought to “challenge social norms for girls and women in sport” and highlight “the systematic, structural inequity that girls and women experience in most facets of their life.”