A group of students from the College of African Wildlife Management, Mweka, in the Moshi Kilimanjaro region, visited the Tanzania Tourist Board (TTB) head office in Dar-es-Salaam to learn more about the organization’s role and functions, particularly in marketing Tanzania as a tourist destination.

After a familiarization tour of TTB’s main office, students from Wildlife Management College of Mweka and their instructors pause for a photo with TTB’s Senior Marketing Officer Mr Vedastus Mwita (standing fifth from right). 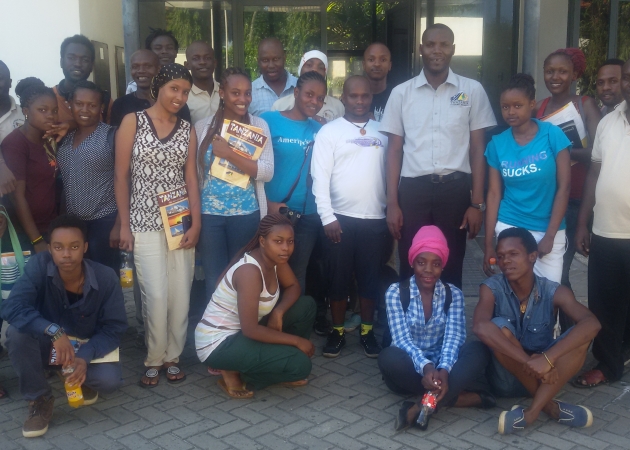 A group of students from the College of African Wildlife Management, Mweka, in the Moshi Kilimanjaro area, visited the Tanzania Tourist Board (TTB) main office in Dar-es-Salaam to learn more about the organization’s role and activities, notably in marketing Tanzania as a tourist destination.

Following a brief presentation in TTB’s boardroom by officials from the Promoting department, the visiting students were highly pleased and excited about how TTB fulfills its responsibilities in marketing Tanzania worldwide as well as the board’s local tourist promotion programs.

The College of African Wildlife Management (CAWM), sometimes known as Mweka College or just Mweka, is a Tanzanian university located in the settlement of the same name on the southern slopes of Mount Kilimanjaro, about 14 kilometers north of the city of Moshi.

The Mweka Route, one of the paths used for the descent on Kilimanjaro, is named after the town.

Following Tanganyika’s independence in 1961, Bruce Kinloch founded the College of African Wildlife Management in 1963 as a pioneer school for the training of African wildlife managers.

Mweka College is very famous in Tanzania and it admits hundreds of students each year to study at this esteemed institution located on the base of Kilimanjaro.

Where is Mweka College located?

The College is situated 70 kilometers from Kilimanjaro International Airport and 14 kilometers north of Moshi town in northern Tanzania on the southern slopes of Mount Kilimanjaro just near the Mweka Gate.

The short rains, which last from November to January, and the long rains, which last from March to June, are the two rainy seasons at Mweka. The College sits 1,400 meters above sea level, and although seasonal variations do occur, year-round temperatures often range from 140 to 210 degrees Celsius. The college campus has traditionally been chosen by many individuals and organizations for seminars, workshops, and conferences due to its favorable weather, geographic location, and accessibility from and to the main entry points to Tanzania.

The College of African Wildlife Management, MWEKA (CAWM). Situated in the foothills of Mt. Kiliminjaro, CAWM was established in 1963 with the aim of providing training for employees of, and those seeking employment in, game parks, wildlife sanctuaries, and national parks throughout the African continent. They provide need-based training to protected areas and wildlife managers by offering a variety of awards for long courses in Wildlife Management, as well as short courses in different fields related to conservation such as Tourism and Ecotourism Management, Nature-Based Interpretation and Communication, Tour Guiding, Wildlife entrepreneurship, participatory planning, community conservation, biodiversity conservation, wildlife education, natural resources management, environment impact assessment (EIA)) protected area and land use management.

The African Wildlife Leadership Foundation (now known as the African Wildlife Foundation), the United States Agency for International Development, and the Frankfurt Zoological Society supplied initial funds for Mweka, with Tanganyika’s government donating facilities. Since then, the College has taught over 5,000 wildlife managers from 52 nations (28 African and 24 other countries), the majority of whom are working in protected areas across Sub-Saharan Africa.

Although the bulk of the College’s students are from the SADC area, it welcomes other students with an interest in African wildlife management.

A significant number of students come from Western and Eastern Europe, as well as the United States, India, Sri Lanka, and Japan, to name a few.

The college’s key goals are as follows:

1) To train both local and foreign students for work in Tanzania’s and Africa’s national parks and reserves.

2) To train students for careers in Tanzania’s and Africa’s safari sectors (photography and hunting).

The village of Mweka is located on the southern slopes of Mount Kilimanjaro, which is the tallest peak in Africa at 5,895 meters with Uhuru Peak. Starting at around 1100 meters, the settlement rises to the mountain forest at approximately 1600 meters.
The rivers that flow through the settlement of Mweka, such as the Kichau River, are created by Mount Kilimanjaro.

Mt. Kilimanjaro is a tropical mountain with plenty of natural resources, but it is also extremely susceptible to local land use changes and global climate change.

The environment at Mweka Village may be seen by surveying and studying satellite pictures, as shown in the map to the left. You can observe that the majority of the land is farmed using Chagga agroforestry techniques, which protect the