The first balloon flight over Mount Kilimanjaro and Ngorongoro Crater is the brainchild of Ultramagic Experience that brings together a group of extraordinary pilots from around the world, to make challenging balloon flights in unique places. This year 2021, they came to Tanzania with two aims to fulfill.

After the extraordinary experience in these two unique destinations in Tanzania, they will finish with a Zanzibar beach holiday, where they will get to take local flights and relax on the pristine beaches of the Zanzibar Spice islands that are surrounded by the Indian ocean.

Ultramagic Balloons is no stranger to difficult hot air balloon excursions, having completed this journey with Ultramagic 10 years ago in 2011.

To get first-hand information and to follow their experiences, check out their blog that is updated regularly at: www.ultramagicexperience.com

Entering this link you will be able to see the blog where every day we explain how the trip is going, the location of the group, and the flight tracks. 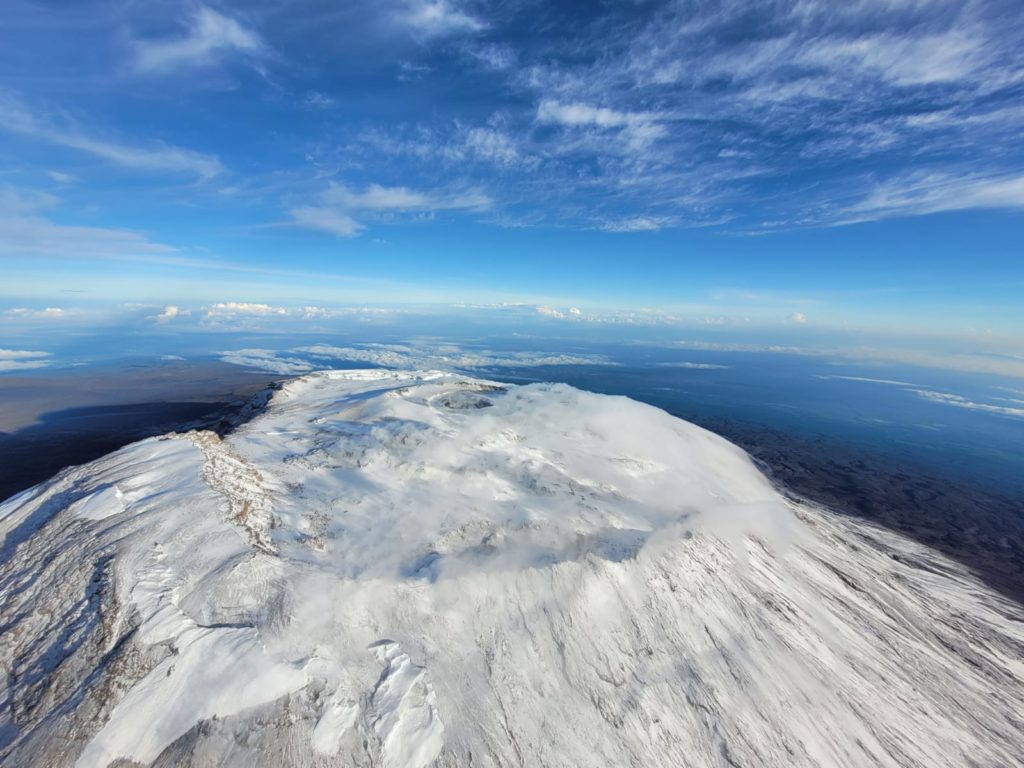 “We humans needed additional oxygen, but the propane flame needed extra oxygen to remain burning,” said the team at 4,000 meters.

The balloon was launched on Monday, 6th Dec 2021 from an area near Marangu which is in the Kilimanjaro Region crossing the entire mountain range and ending up on the western side of Mt Kilimanjaro. It was an unforgettable experience. 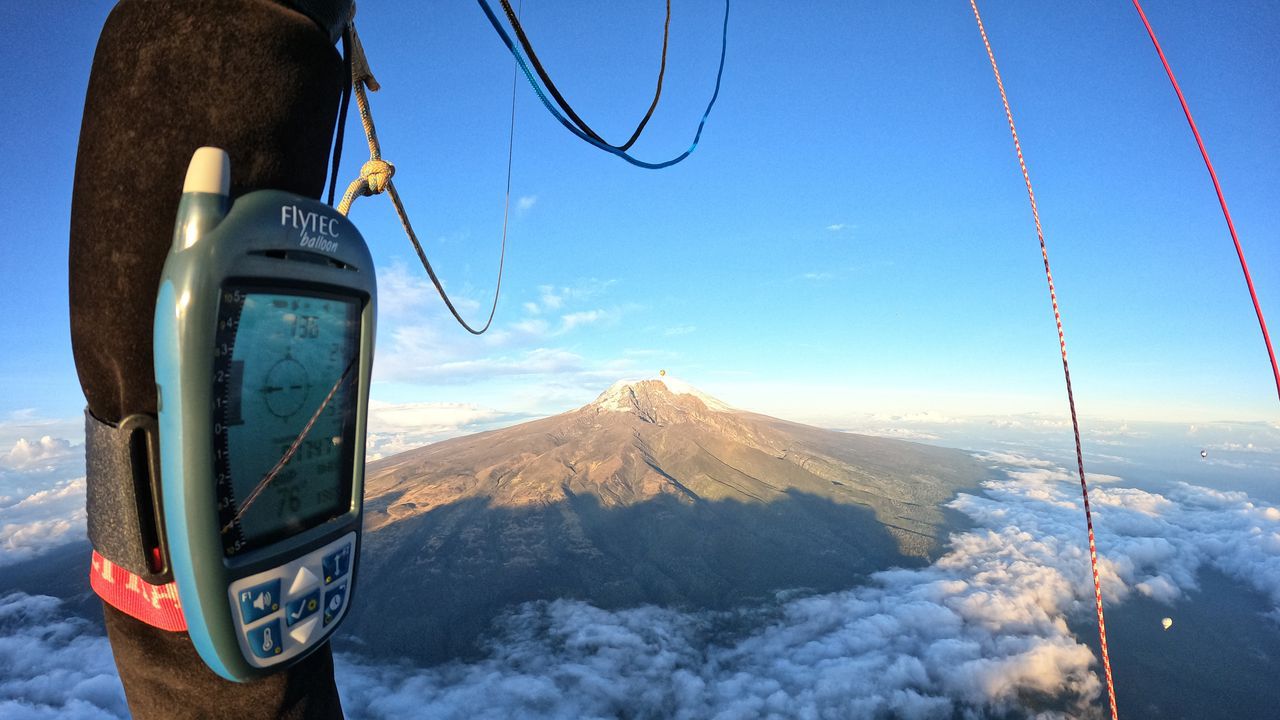 The Kilimanjaro Balloon Flight Itinerary: How it all happened

After landing at the Jomo Kenyatta International Airport in Nairobi early in the morning they drove all the way to Arusha after breakfast and after crossing the Namanga One-Stop Border they were booked into Two Mountains Lodge in Arusha by lunchtime.

In the afternoon they had the first briefing: then dinner overnight as they waited for the hot air balloons to arrive in Arusha the following day.  At the briefing, they discussed the several possible take-off fields for the Kilimanjaro balloon flights.

Leaving Arusha early in the morning after breakfast, they made their way towards Marangu via Moshi town, the closest town to Mount Kilimanjaro. Marangu is close to the hot air balloons take-off area. After a nice meal, they proceeded to the take-off site to start preparing the balloons. The gas and the oxygen had already arrived on site, and one container had already arrived while the second container was still underway heading to Moshi – Marangu Area.

The second container arrives and this day is dedicated to doing the final preparations, refueling the tanks, and setting up the oxygen equipment. The day is beautiful and everybody is in high spirits waiting for the next day to fly the balloons in the sky above the rooftop of Africa, Mount Kilimanjaro. The weather looks promising so Monday it is!

The day begins very early in the morning at 3 am. After reaching the launch site at 4:45 am ( 0454 hrs) on a cloudy sky. Preparations to fly the balloons get underway but it starts to rain while the balloons are being inflated! The mission has to go on anyway, there is no going back, the sky is clearer above the clouds anyway!

Flying of the balloons and take off begins straight away and my oh my, the first view of the Kilimanjaro from the balloons is breathtaking.

Some pilots have been able to cross the main crater, and all balloons have approached both the Mawenzi and Kibo peaks.

The views were stunning, the weather marvelous and warmer than expected, and everyone has enjoyed a safe flight and landing on the western side of Mount Kilimanjaro.

The retrieve has taken a little bit longer due to logistic issues but the atmosphere is relaxed as there are no hurries at all at this point. What a success it has been and everyone is very emotional when they all assemble at the meeting point.

After a nice and much-needed relaxation, the crew takes a day trip around Moshi town and to the local market as they gear up for the next balloon adventure, flying over the Ngorongoro Crater.

Flying over the Kilimanjaro Mountain, a great accomplishment

With a second flight over Mount Kilimanjaro under their belts, they were heading to Ngorongoro, a vast crater 12 miles in circumference with steep sides encircling a wildlife refuge empty of people. The team had been trying for years to get permission to fly in or over the crater, and this would be the first time. 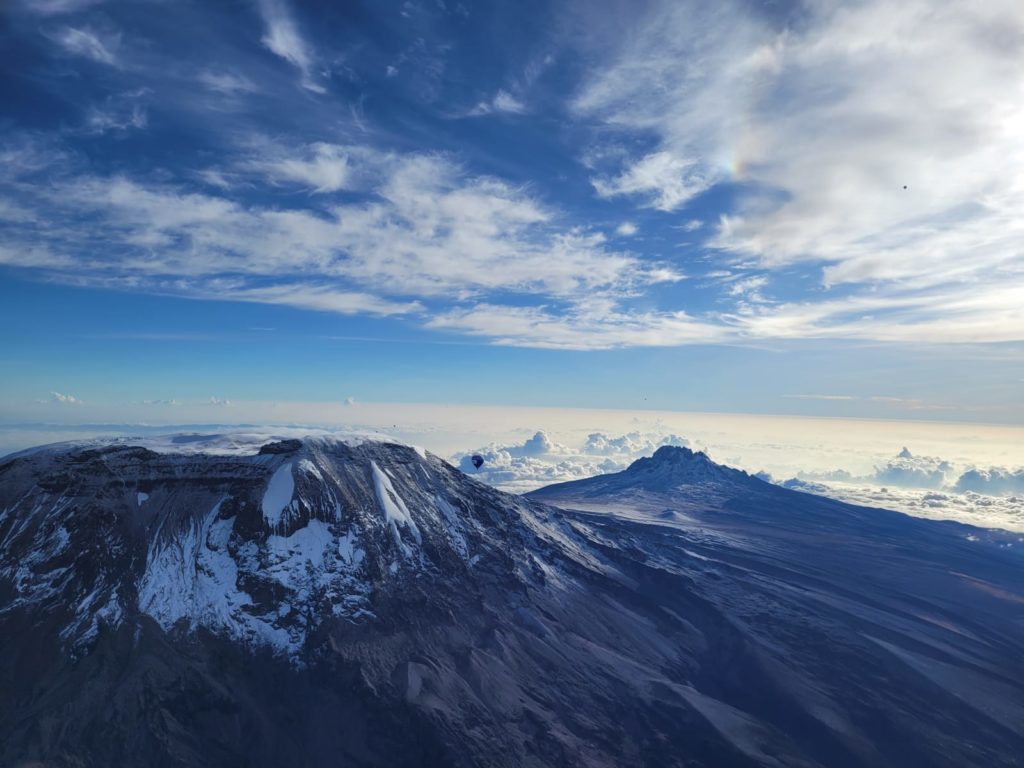 After Kilimanjaro balloon Safaris, it is Ngorongoro’s turn as the day begins with a game drive in the Ngorongoro crater. It is a world heritage site filled with abundant resident wildlife that roams within the crater.

After many efforts and with the collaboration of the Ngorongoro Conservation Area director and also the help of Tanzanian pilot Abeid Soka, balloons are successfully transported down to the take-off site at the crater.

The balloons are ready for what is to be the first flight ever taking off from inside the Ngorongoro crater!