Kilimanjaro Marathon is hosted in the city of Moshi, Kilimanjaro Region. Every year in Moshi, Tanzania, a normal 42.2 km marathon, a 21.1 km half marathon, and a 5 km fun run are conducted towards the end of February/beginning of March.

The Tanzania Tourist Board, the Tanzania Amateur Athletics Association, the IAAF, and AIMS have all given their support to this race, which was created to promote the sport in Tanzania. The marathon has official marshalling, timing, and refreshment stops at regular intervals as an IAAF-registered event. It’s possible to use it as a qualification for the word Comrades. The event is held under the watchful eye of Mount Kilimanjaro, with a moderate altitude climb with the entire race taking place between 830 and 1150 meters above sea level on decent tarmac roads.

The course is cheered on by an enthusiastic local populace, and the sociable runners among you may even stop for a nice ‘Kili’ beer along the way!

When is the Next Kilimanjaro Marathon Event 2022?

Since 2003, a regular 42.2 km marathon, 21.1 km half marathon, and 5 km fun run have been conducted in the town of Moshi, in the shadow of Kilimanjaro, at the end of February/beginning of March. This event will mark its ’20th Anniversary’ in 2022. This AIMS-registered race was created to promote the sport in Tanzania, and it has the support of the Tanzania Tourist Board, the Tanzania Amateur Athletics Association, and the International Association of Athletics Federations.

During ‘racing weekend,’ the atmosphere in Moshi is electrifying. With so much activity, people out running in the shade of jacaranda-tree-lined streets, there are plenty of places to visit, including several restaurants and bars serving a wide variety of meals ranging from local delicacies to international cuisine.

Pubs with a lively atmosphere, as well as live music and discos, may be found around town. There are a lot of hotels in the neighborhood, but they fill up quickly on race weekend.

All three events take place in the Kilimanjaro foothills. All of the races are marshalled, with traffic control and medical personnel stationed along the route.

The enthusiasm around the event is palpable on Sunday morning, with residents flocking to cheer on the participants. The celebration concludes in Moshi’s MoCu stadium, where there will be music, food, and plenty of Kili beer.

Highlights of the Course

The path runs past several small-holder farms, towns, portions of Moshi town (which is eerily quiet on a Sunday morning! ), banana and coffee plantations, and patches of woodland, eliciting a great deal of enthusiasm from the locals.

With local bands performing, entertainment, throngs of local fans cheering on the runners, and plenty of food and drink for sale, the atmosphere in the stadium is electrifying.

Wild Frontiers, the official tour operator and a Tanzanian inbound operator with headquarters in South Africa and activities in Uganda, is providing travel arrangements and packages to attend the event. Wild Frontiers has extensive Tanzanian travel expertise and is a member of TATO (Tanzania Tour Operators).

The event is fully supported and staffed by local organizations. Medical help and communications are available, as well as crowd management and traffic control.

Official timekeeping is set up, as well as an official award presentation and event with local dignitaries in attendance.

The half marathon, which is described below, is the second part of the event.

Starts outside the college gate at 7:00 a.m. and heads north, towards the mountain. In 8 kilometers, you’ll gain roughly 250 meters of elevation.

At roughly 8 kilometers, the course takes a dirt road for about 2 kilometers, passing through farms and schools before connecting Lema Road and the steep descent back to the stadium.

Along this route, there are plenty of water outlets — some with Coke – and sponge points.

The FUN RUN will be around 5 kilometers long. The 5km event does not have a time limit.

History of the Kili Marathon

To begin with, the Kili Marathon was simply an idea conceived by event organizer Wild Frontiers in 2002 over a cold Kilimanjaro Lager of a great way to attract tourism to Tanzania – an iconic name and location for a marathon, using sport and a new marketing concept to attract runners to Tanzania, who would then climb the mountain or go on safari after running the race. The race will enter its 20th year in 2022, marking a significant milestone and a thanks to all of the sponsors and competitors who have supported us and contributed to the growth and longevity of this incredible event.

After a smidgeon of promotion on a shoestring budget, the first year’s race drew a mix of a few ‘international’ runners and local interest, resulting in a field of roughly 300 – 400 racers who loved the race.

In 2003, locals’ curiosity was sparked, and they came out early on a Sunday morning to see what was going on in their sleepy town. Children followed some of the competitors, goats roamed the side of the roads, and half of the route was on dirt, but most people went about their morning routines as they would on any other Sunday.

We planned a full 42-kilometer and half-marathon race, as well as a 10-kilometer run – all of which were timed manually with stopwatches… With a small number of runners, it was rather simple.

The roads are crowded with competitors today, who are competing for first place – shoulder to shoulder at the start. In addition to the Full and Half Marathons, we also offer an extremely popular Fun Run, perfect for families and anyone just getting started with running! 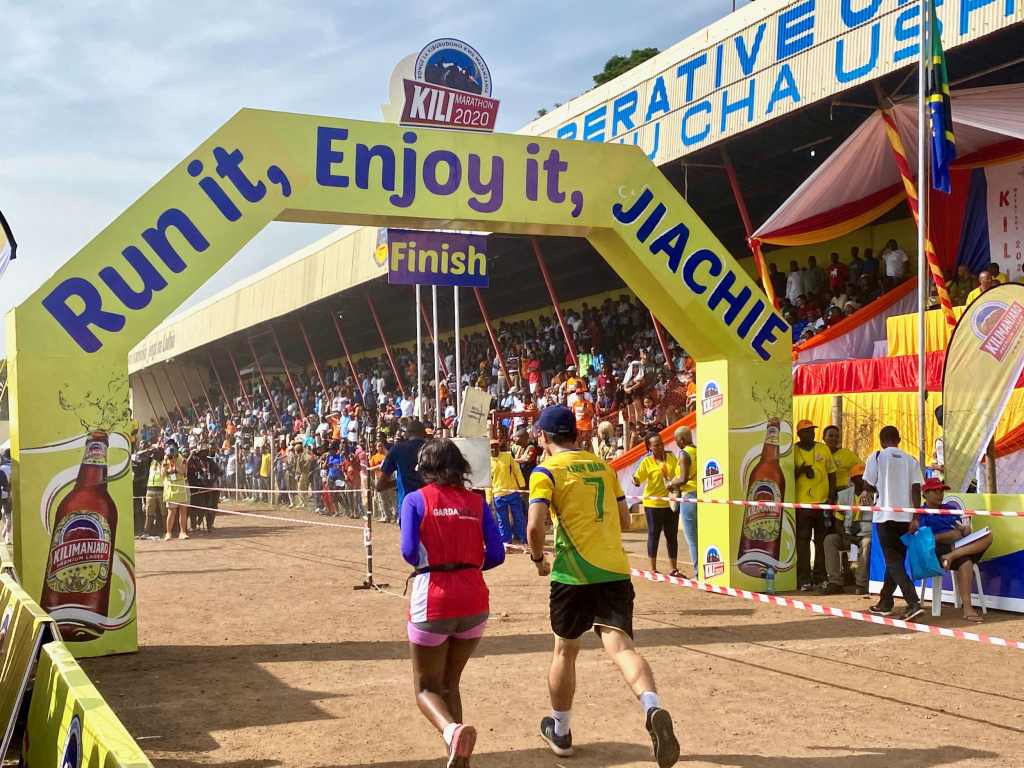 Our primary sponsor, Kilimanjaro Premium Lager, as well as other sponsors, has helped us develop this little event into a monster throughout the years — the sponsors must take responsibility for a big part of the success. The event is designed to put Tanzania’s emerging top athletes to the test, with world-class times being set by these gifted runners — as well as attracting up to 12,000 runners across various distances who are out enjoying the morning.

The race attracts quality runners from neighboring nations as well as from across the world, with up to 45 different nationalities participating. Apart from the’sports’ component, the event has a significant economic impact in the region, with sponsors focusing their CSR efforts on the event, and the economic advantages to the country and region are significant.

A change in lifestyle is also occurring across the country, with many more individuals taking up jogging as a way to stay fit and socialize. From Tunduma to Taveta, every real Tanzanian aspires to take part in the ” Kili “, as it is known, and the medals are proudly displayed…