The top 7 Africa Mountains to Climb

The top 7 Africa Mountains to Climb

There is more to Africa than just safaris. Yes, safaris are fantastic, and the beaches are varied and spectacular. However, an African vacation does not have to be limited to 4X4 game drives or leisurely strolls along cotton-soft dunes bordering crystal blue lakes.
If you want to take in the continent’s stunning beauty while also seeking adventure, there’s just one place to go: to the top.
Africa’s magnificent rooftops offer glorious views and a wide range of trekking experiences that appeal to all kinds of climbers, from hardcore mountaineers to weekend warriors and families, from the snow-capped peak of Kilimanjaro to the forest-clad slopes of Mount Kenya to the Alpine meadows of the High Atlas Mountains.

It’s the rugged terrain and the possibility to mix a wildlife experience with the climb that is why we have selected seven of the top treks and climbs from around Africa and they are:-

See also the top 10 mountains of the world

You’ll be standing on Africa’s highest peak if you reach the top of Tanzania’s 5,895-meter Kilimanjaro. The picturesque mountain attracts tens of thousands of visitors and adventurers each year, making it Africa’s most popular hiking destination.
To climb Mount Kilimanjaro, you don’t need to be a technical climber; you simply need to be physically fit. The good thing is that you can also combine your Mount Kilimanjaro climb with a safari or Zanzibar Beach Holiday.

Six routes are available, each with varying degrees of effort, scenery, and success. There is no need for any specific equipment.
You’ll pass through five distinct climatic zones on your approach to the “Roof of Africa,” with artic freezing temperatures surrounding the glaciers that crown Kibo, Kilimanjaro’s summit.
However, you’d best hurry since, according to climate change scientists, the ice and snow on the mountain’s highest slopes is melting and might vanish within decades.

The High Atlas, located in central Morocco, is home to North Africa’s highest peak, Mount Toubkal, which stands at 4,165 meters. There are several paths to choose from on your ascent, however, new climbers should be aware that the hike across the mountain’s difficult terrains is strenuous.
As you travel through the difficult region, you’ll get the opportunity to see beautiful gorges and rolling valleys, as well as meet the indigenous Berber people who have lived in these harsh environments for years.
The summer months are the finest for climbing the High Atlas.

Mount Kenya, Africa’s second-highest peak at 5,199 meters, is a long-extinct volcano. The mountain’s glacial basins, different vegetation zones, and rich animals, located close south of the equator, will provide you with beautiful views and a superb trekking experience.
The ascent to the mountain’s steep ice-capped peaks, on the other hand, is rather difficult as Mount Kenya is perhaps the most technical in the East African area.
Temperatures seldom get above freezing near the mountain’s peak. On the journey to the mountain’s peak, there are various paths, most of which take three to seven days to accomplish. 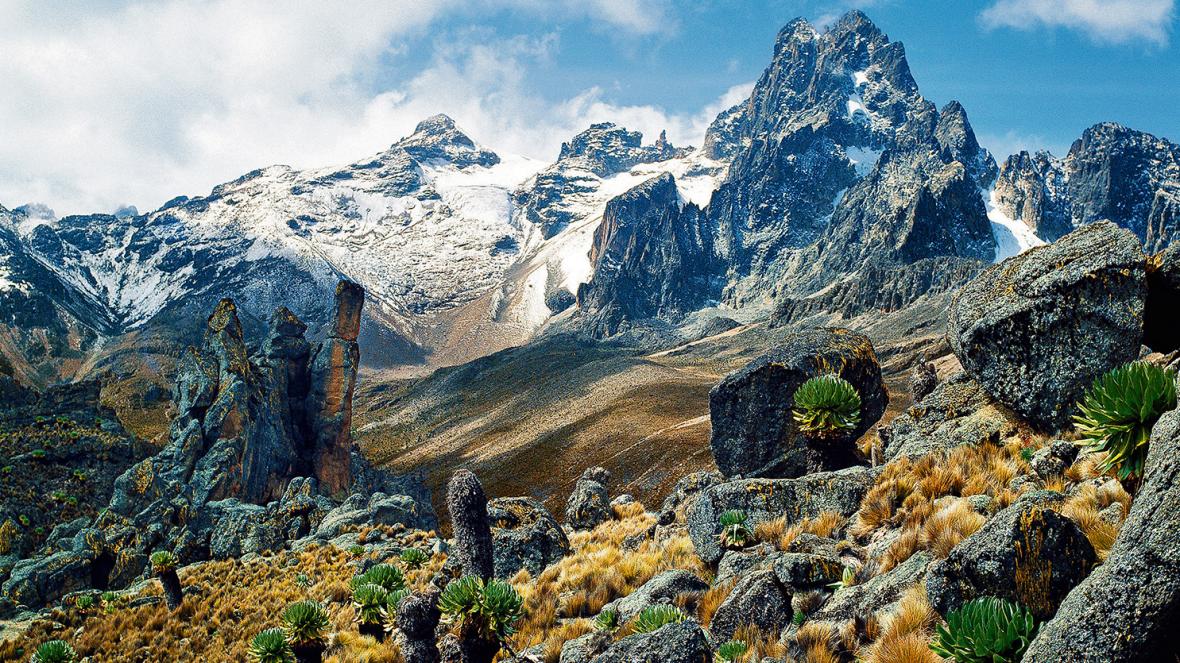 Mount Meru may always lie in the shadow of its towering neighbor, Kilimanjaro, but Tanzania’s second-highest peak (4,565 meters) has its own set of admirers.
It’s less well-known, but Mount Meru is for genuine enthusiasts who want to accomplish something that very few people do.
Mount Meru, a spectacular volcanic cinder cone, offers stunning vistas and a varied range of fauna. Up to around 2,900 meters, the slopes are covered in lush rainforest, which gradually gives place to stony terrain.
Mountaineers utilize Mount Meru for acclimatization before ascending Kilimanjaro, or for trekking with the native Massai tribe.

Northern Ethiopia’s rich cultural legacy has long attracted travelers from throughout the world, with its magnificent rock-hewn churches and medieval fortresses. However, the beautiful Simien Mountains, a natural wonder where multiple jagged peaks of solidified lava are divided by deep valleys to make an imposing scene, are attracting a growing number of visitors.
The mountains also house some of the world’s most endangered creatures, such as the Walia ibex, which is found nowhere else on the planet. The region’s national park has been designated as a UNESCO World Heritage Site since 1978.
Ras Dejen, at 4,533 meters, is the highest peak. 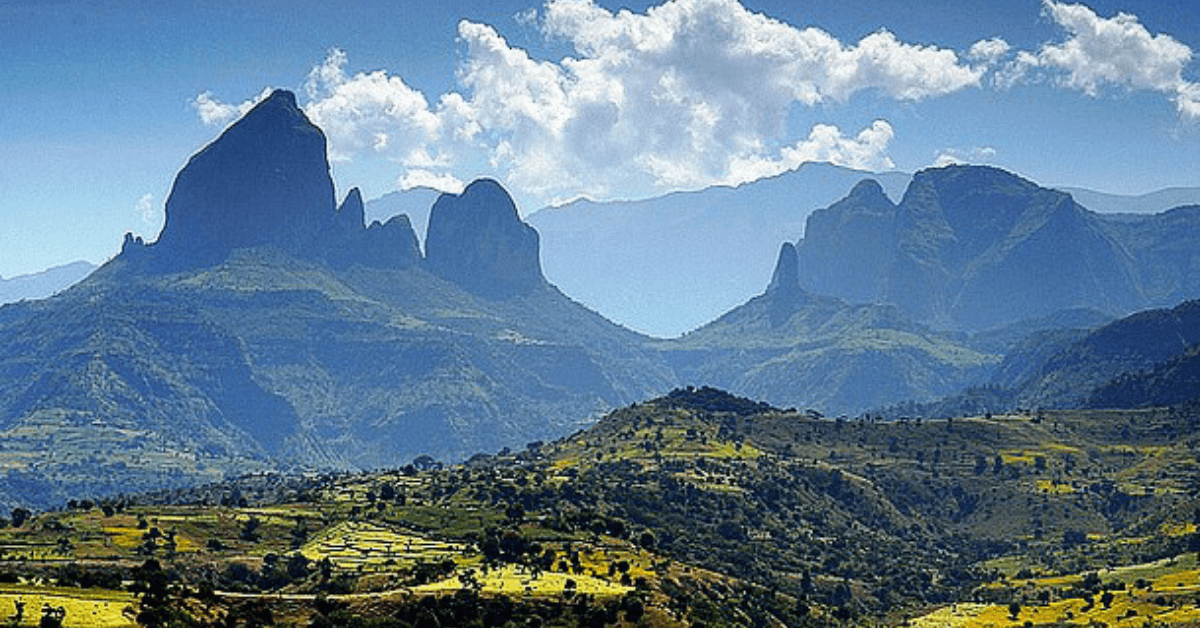 Mount Elgon, a spectacular extinct volcano on the Uganda-Kenya border, dominates the horizon. Its massive crater is bordered by numerous rugged peaks, the tallest of which is Wagagai at 4,321 meters.
You may zip through stunning cliffs where Mount Elgon’s waters drop as dramatic waterfalls and discover old caverns. The historic thick woods and bamboo belts that cover Elgon’s slopes give way to a stunning moon-like moorland zone clothed by tree heaths, gigantic groundsels, and lobelias.
The whole hiking circle takes up to five days and includes various paths to the mountain’s peaks.

It is also necessary to descend into the huge crater, which is 40 kilometers long and 8 kilometers broad.

The Drakensberg is a massive mountain range in South Africa, Lesotho, and Swaziland that stretches for 1,125 kilometers and rises to 3,475 meters.
Both moderate day treks through indigenous woods and more strenuous adventures in rugged terrains and steep terraces are excellent in the huge mountains. They also have a number of game reserves and parks, which draw tens of thousands of visitors each year.
A lot of people want to go hiking there since it’s very lovely and the landscape is magnificent. 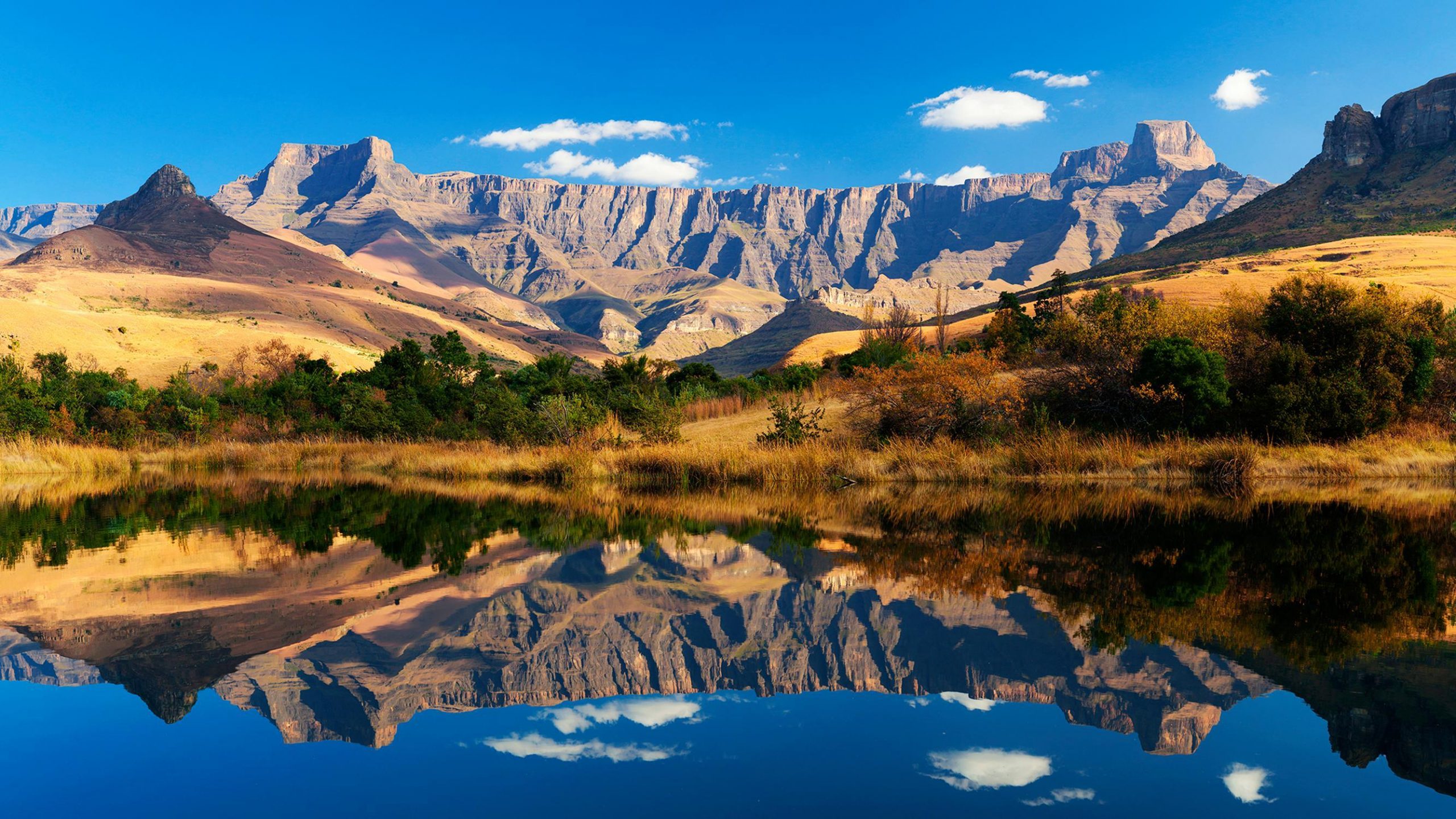