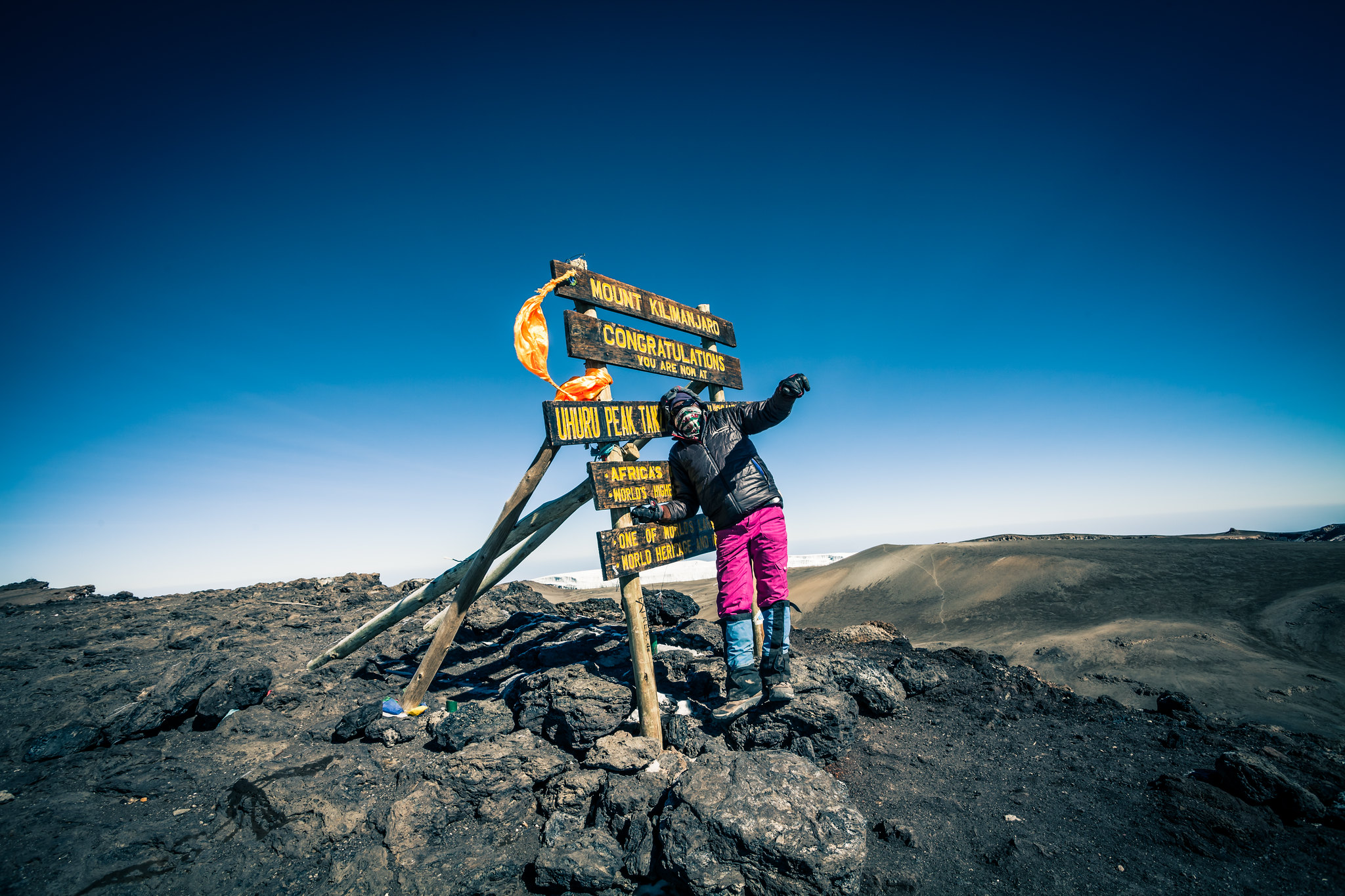 Uhuru peak is the summit of Mount Kilimanjaro, located on Kibo in the arctic zone of Kilimanjaro, The peak is perched on one of the three peaks on the mountain that consists of Kibo, Mawenzi, and Shira.

Its name comes from the Swahili word for freedom ‘Uhuru’

Uhuru Peak located in Kibo’s crater rim is the highest summit that climbers from all over the world attempt to summit Kilimanjaro. Reaching Uhuru peak is every mountain climber’s dream

Standing at a staggering height of 5, 895m, Uhuru Peak holds the title of the highest point in the whole of Africa and second in the world.

This peak also holds the bragging rights of being one of the most sought-after mountain summits in the world.

How to climb Uhuru Peak: Video

In order to climb to Uhuru Peak on Mount Kilimanjaro, you need to be mentally prepared, do at least some training to be in your best form, and follow proper acclimatization rules like drinking enough water, having proper planning to prepare for your climb, getting the correct gear, and making sure you eat energy giving foods while on the mountain. Below is a video showing climbers approaching the summit of Uhuru Peak.

It is at Uhuru peak that the famous, jauntily angled summit sign is erected. This signpost is where every Mount Kilimanjaro climber takes their victory photograph. At this signpost on Uhuru peak, climbers take all kinds of photographs holding flags, raising hands in jubilation, smiling, and other poses.

The Uhuru peak sign bears the famous words “congratulations, you are now at Uhuru Peak at 5,895 m” This sign is more than just a mere sign, it is a symbol of achievement and relief. —These rustic planks made out of wood have become an icon for mountain climbers all over the world.

In full the wooden signpost at Uhuru Peak reads 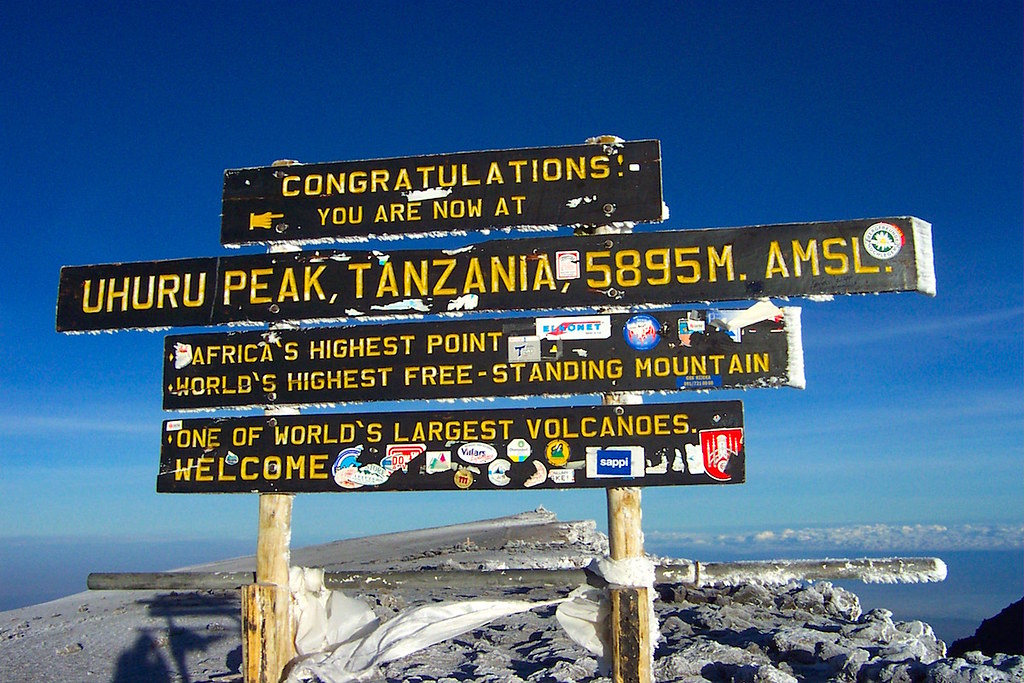 The best time to climb the mountain to the summit, Uhuru peak is during the dry season months of January, February, July, August, September, and October when it is warm and dry on the mountain.

There are no animals or vegetation present at Uhuru peak due to the harsh weather conditions in the area with temperatures falling below zero degrees Celsius, high winds and no rainfall.

The Uhuru peak area is just a vast landscape of pristine white snow and towering peaks.

Below are some unbiased reviews on our google page from climbers talking about their experience on Uhuru Peak and their ultimate Kilimanjaro journey to the highest peak on Kilimanjaro. 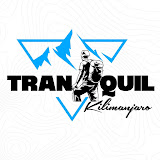 Richard Armstrong
One of the best experiences of my life, but also one of the toughest. Don't believe people that say it's easy, but it's worth it all to watch the sun rise on the peak with the shadow of the mountain imposing on Mt Meru in the background. The roof of Africa doesn't give up its beauty easily!

Ravi Kumar
One gets emotional as they reach the top. The hike breaks and makes you. You grow strong within as you redeem yourself from outside.

History and origin of the name “Uhuru” Peak.

“Uhuru” is a Swahili word that means freedom. Uhuru peak is part of Tanzania’s (then Tanganyika) history when they were gaining independence from British colonial rule.

On the eve of 8th December 1961, the late Brigadier. Alexander Nyirenda (then army officer) was tasked to erect the Uhuru torch and Tanzania’s national flag on top of Mount Kilimanjaro as an act of celebrating independence.

Simultaneously as the Tanzanian flag was being hoisted at Uhuru peak, the Union Jack (then the flag of Tanganyika) was being lowered at the national stadium as a sign of a change of things in the new Tanzania.

From the past right until about 3 years after gaining independence from the British, Uhuru peak was formerly known as the Kaiser Wilhelm peak, named by German explorer Hans Meyer under the then German colonial rule.

On 06.10.1889 the first climbers of Kilimanjaro Dr. Hans Meyer and Ludwig Purtscheller hoisted the German imperial flag at the then still nameless summit and Meyer as expedition leader called the summit with the right of the first climber “Kaiser-Wilhelm-Spitze”.
Hans Meyer with his comrade-in-arms, the Austrian alpinist Ludwig Purtscheller, officially took possession of the summit for the German Emperor: “I planted a small German flag in my rucksack on the weather-beaten lava summit, cheering three times loudly from Mr. Purtscheller and shouting rejoicing: With the right of the first bidder, I baptize this hitherto unknown, nameless peak of the Kibo, the highest point on African and German soil, with the name: Kaiser-Wilhelm-Spitze 1918 the Zugspitze as the highest mountain in Germany. Wilhelm II received a piece of lava rock from the summit. The Peak had its name changed from Kaiser Wilhelm Peak to Uhuru peak in 1964, three years after Tanzania gained independence.

In place of the flag and torch that was placed on Uhuru peak back in the year 1961, a signpost stands there thanks to the park authorities.

Uhuru peak is situated along the crater rim of Mount Kilimanjaro on the Kibo volcanic cone.

The area surrounding Uhuru Peak is covered with temperatures falling even lower at night times.

The high altitude and huge size of the mountain affect gravity on the mountain in such a way that it is difficult to exactly tell which way is up.

The main reason why you need experienced guides and porters to take you to the Uhuru peak is that when you are at the summit you may get lost easily because the peak may not seem like the highest point to you.

The heart of Kilimanjaro is Kibo. Kibo, the highest peak of Kilimanjaro (19,340 ft/ 5,895 m), is crowned by Uhuru Peak. It is here that the conclusion of what we refer to as a “real Kilimanjaro climb” takes place. There are all of the peak camps.
One can witness the renowned Reusch Crater and Ash Pit and Kilimanjaro glaciers in the Kibo crater area.
Barranco Wall, another well-known landmark of Mount Kilimanjaro, is located on Kibo’s southern slope. The view from the peak is nothing short of amazing and is only surpassed by the views from Uhuru Peak itself when Kilimanjaro trekkers pass over it on their route from Barranco Camp to Karanga Camp.

Vegetation and Climatic Zone of the Uhuru peak

Uhuru Peak on Kibo lies in the arctic zone of Mount Kilimanjaro and as you climb to this summit, you pass across many natural zones. The lower slopes range in elevation from 800 to 1800 meters, and residents grow maize, coffee, and bananas in this fertile volcanic soil. Between 1800 and 2800 meters, there is a rainforest zone with abundant precipitation and lovely flowers like Protea Kilimandsharica and Impatients Kilimanjarii.

Between 2800 and 4000 meters is the heath and moorland zone. At night, expect frost, while throughout the day, expect scorching sunlight. The moorland is filled with enormous groundsels. There will be a lot of white-necked ravens around as well. Low precipitation occurs in the high desert, which is 4000 to 5000 meters above sea level. Finally, the summit zone where Uhuru peak is located is almost 5000 meters above sea level and has arctic temperatures at night.

How to get to Uhuru peak

Uhuru Peak can be reached best by trekking because Mount Kilimanjaro is a ‘walkable” mountain. Getting to Uhuru peak can be made possible via a number of routes. These routes vary in the level of difficulty, traffic, and scenic beauty of the surroundings.

The easiest route to get to the Uhuru peaks summit is the Marangu Route and Rongai route while the most difficult routes to climb are the Machame, Shira, and Lemosho routes.

There are approximately 8 routes (including the special permission western breach) that head to Uhuru peak, with most getting there within 5 or 6 days of trekking on foot.

How high is Uhuru Peak?

Uhuru Peak is the highest summit on Kibo’s crater rim. The Tanzania National Parks Authority, a Tanzanian government agency, and the United Nations Educational, Scientific and Cultural Organization list the height of Uhuru Peak as 5,895 m (19,341 ft), based on a British survey in 1952.

Which is the highest peak in Kilimanjaro?

Kilimanjaro is the highest mountain in Africa at 19,341 feet (5,895 meters), but it isn’t a mountain in a traditional sense.

The sign on top of Mount Kilimanjaro’s peak, at the summit, is located at an altitude or elevation of 5,895 meters or 19,340 ft.
The sign at Uhuru peak has this distance written on it.

How long do you spend at the summit?

The average time spent at the peak is between 15 and 30 minutes, giving you ample time to take in the scenery, take some pictures, have a snack and a drink, and take a break. So that you can potentially reach the peak in time for sunrise, summit day often starts in the middle of the night.

Congratulations, you have reached the highest point in Africa if you make it to Uhuru Peak, which is 5,896 meters high. You won’t be too upset about starting the two-day descent so soon because it will be really chilly that early in the morning.

Is Uhuru Peak the top of Kilimanjaro?

What does the sign say on top of Mount Kilimanjaro?

The sign on top of Mount Kilimanjaro, at Uhuru peak, is a congratulatory message, that says congratulations for reaching Uhuru Peak at a height of 5,895m above sea level which is the highest point in Africa and the highest free-standing mountain in the whole world.

Where is Uhuru Peak?

How long does it take to hike to Uhuru Peak?

Climbing Kilimanjaro from the base of the mountain to Uhuru Peak, the main summit on Kibo would take anywhere between 5-9 days depending on the route you are choosing. Adding extra days to your expedition will aid with acclimatization on the mountain, giving you a higher summit success chance that will help you to reach the summit without difficulties of Altitude sickness.

Do you need oxygen to climb Kilimanjaro to Uhuru Peak?

Even though climbing Mount Kilimanjaro is a challenging adventure, you will not need supplemental oxygen to reach Uhuru Peak, the summit provided you follow the simple rules of acclimatization, “climbing high and sleeping low” and using a slow and steady pace.

How many kilometers or miles is it to reach to Uhuru Peak?

The length of the journey to Uhuru Peak depends on the route you choose to take you to the summit. The shortest trail is the Umbwe route, which is a more direct and steep approach that measures 23 miles (37 kilometers). The longest route is the Northern Circuit, measuring 56 miles (90 kilometers)

Which are the best routes to get to Uhuru Peak?

While the Marangu, Machame, and Rongai routes are more popular since they have existed for a long time, Lemosho and Northern Circuit Routes are the best routes to climb to Uhuru Peak on Mount Kilimanjaro as they are more scenic, long, and offer enough time for acclimatization. Also, they are not as crowded as the other popular routes on the mountain. 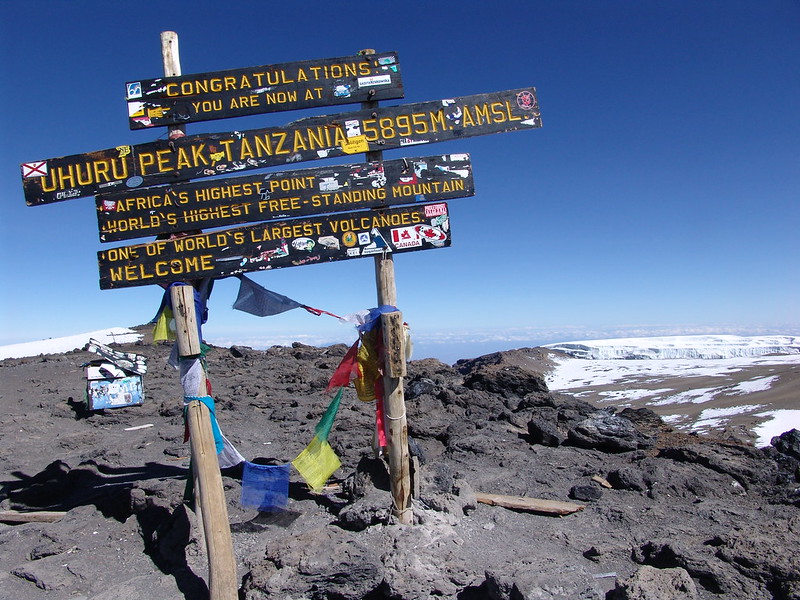