The 7 days Shira route package is seldom used mostly because Shira is an ancient route that does not follow proper acclimatization rules, therefore, we tend to recommend the more recent and improved version of this route, which is the Lemosho Route. The Shira Route, with its starting point near Shira Ridge is a rarely used route. It resembles the Lemosho route in so many ways. In fact, the Lemosho route is the improved version of the Shira route which is an old route. 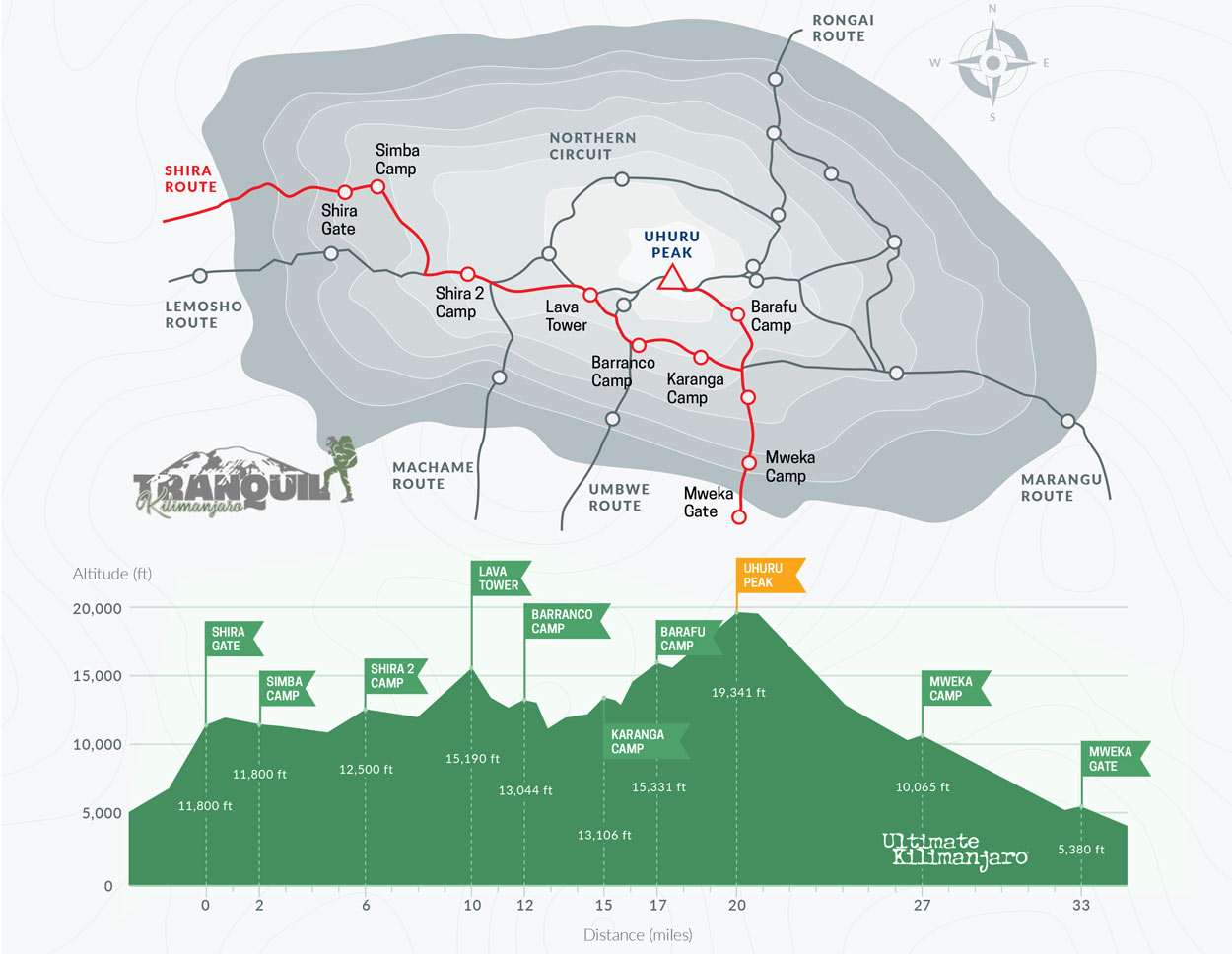 Advantages and Disadvantages of the Shira Route

Shira Route’s advantage is that it is very scenic with beautiful vistas and views but the main disadvantage is that its starting point is at very high altitudes making many climbers opt for Lemosho instead of Shira Route.  The route starts at 3,596 meters and is not ideal for hikers that are not experienced, in climbing high altitudes.  To reach the starting point of the Shira Route, you must go there by vehicle and on your first day of camping, you will most likely experience possible altitude sickness. The first camp on Shira is located at an altitude of 3596m (11, 800 ft).

The Shira trail ascent begins to form the western side of Mount Kilimanjaro after a long drive to Shira Ridge which is the starting point.

The long drive from Moshi goes through the rainforest zone and the hiking trail begins up to Shira Ridge which is the route’s starting point. The Shira route traverses the expansive and flat, table-like the ground of Shira

Then the route passes below the Southern Ice Field located on Mount Kilimanjaro’s Southern Circuit and then approaches the mountain’s summit via Barafu.

Tranquil Kilimanjaro strongly recommends climbers with previous hiking experience on high altitudes with this route, as normal days of hiking days will vary from  6-8 hours of hiking with daily ascents of 900m to 1000m, perhaps with the odd day ascending around 1,100m to 1,200m and climbing at an altitude of over 3,500m.

N:B The eight-day private climb via the Shira Route package adds an extra day at Moir Camp on the third day then proceeds to Barranco Camp on the fourth day of climbing Kilimanjaro.

The success rate for using the Shira route is considerably high but only recommended for experienced mountaineers since the starting point of the Shira route, the Shira Ridge is set at high altitudes.

Proceed to the Shira Gate by driving where the route’s climb officially begins. The trek traverses scattered shrubs and giant heather until it approaches Simba Camp.

The second day will make it easy for you as the slope is very gradual, helping with acclimatization. The trail goes through the Shira Plateau, located in the heath and moorland zone. The path is very scenic as it takes you to the Shira Cathedral. Then we take a scenic path to the Shira Cathedral, a gigantic rock structure that is surrounded by pyramid-shaped and high pointed rocks, before settling at Shira 2 Camp.

We wake up early morning and after breakfast, head eastwards towards a rugged ridge and eventually to the lava Tower, a 300ft towering giant made out of rocks with is on the southeastern side of the mountain. A hike to the Senecio Forest is done by descending towards the Barranco Camp. The trip to the Senecio Forest is very scenic at an altitude of about 13,000 ft. This descent after going up is done to help with acclimatization and combating altitude sickness.

We leave Karanga Camp in the morning and connect with the Mweka Trail at the junction as we proceed to Barafu hut via a rocky trail. Reaching Barafu Camp marks the end of the Southern Circuit of Mount Kilimanjaro, a region famous for having 360 degrees of panoramic views and scenic. The overnight camp for today is the Barafu Camp, where Mawenzi and Kibo peaks are visible from here. We relax after a long day of trekking as we enjoy early dinner and ponder about the next day which is the summit.

The final push towards the Uhuru Peak summit on Mount Kilimanjaro begins at midnight or shortly after midnight. This is the most mentally and physically challenging segment of your Mount Kilimanjaro climb. The midnight summit attempt comes along with a few challenges here and there like strong winds and cold. We climb into the darkness for a few hours with short breaking intervals in between. Once you reach Stella Point at an elevation of 18,900 ft, you will be rewarded with stunning views of the sun rising from the horizon, one of the best sunrise views you have probably ever seen rising over the Mawenzi peak.  Finally, your effort pays off as you reach the main summit point of Uhuru peak (5,895 m) this is the highest point in the whole of Africa and the highest point of any free-standing mountain in the world.

Going down the mountain from the main summit takes a different approach, using the Mweka Route, we now descend to the Mweka Hut campsite, making a brief stop at Barafu Camp for lunch. The rocky descent trail can be a little bit hard on the knees, this is where the trekking poles come in handy. Mweka Camp is located in the rainforest zone, a region that is usually wet most of the time. Later on in the evening, you will enjoy our last dinner on Mount Kilimanjaro and a well-earned sleep.

This marks the last day of the 7-day Shira route itinerary and we descend to Mweka Gate where we will be awarded or summit certificates for accomplishing our goal.

Meanwhile, a vehicle awaits to pick us up from the gate, at Mweka gate in Mweka Village, ready to return to the hotel/lodge in Moshi

All transfers to the mountain and back to your Arusha hotel

How do I prepare for the Shira route?

When should I climb the Shira route?

Since Mount Kilimanjaro can be climbed all year round, you can climb Shira Route any time of the year provided you have the right equipment and waterproof gear just in case it gets cold and wet during the rainy and wet seasons between the months of April, May and November. The best time though is during the months between January-march, and June-October, the dry and warmer months.

What should I pack and what equipment do I need?

Tranquil Kilimanjaro may supply some of the gear, like the tents, sleeping pads/mattresses, etc but you may need to come with some personal gear most of which are waterproof, and mountain wear like boots for hiking, sunglasses, medication, and not disposable water bottles and headgear

How to get to the Shira Route?

What are the climbing requirements for the Shira route?

First of all, the Shira route is not like the other routes, it requires experienced hikers with careful planning and vigorous training in order to reach the peak of Mount Kilimanjaro using this route. We do recommend the longer version of this route to add extra time/day for acclimatization purposes, this will ensure you catch minimal altitude sickness symptoms.

What permits do I need for the Shira Route?

Your Shira Route cost covers all the entrance fees to Mount Kilimanjaro and any permits required, all you need to pay for is your international ticket and visa fees. To find out more contact us here. 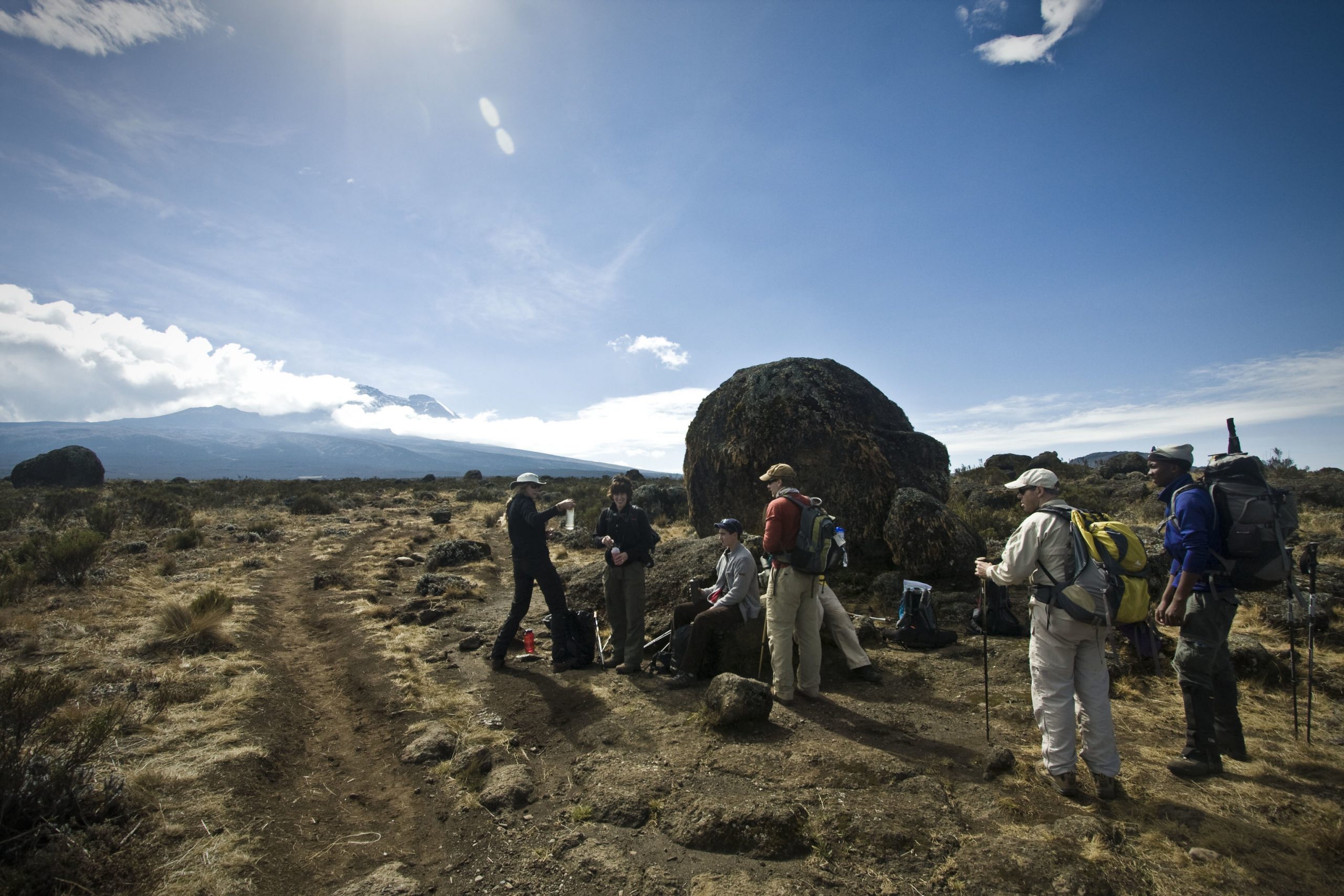 The Machame route which goes by the

This is a 7-day Rongai route itinerary