The famous Marangu Route is the only route on Mount Kilimanjaro that uses huts/cabins as a form of accommodation instead of camping/tents. 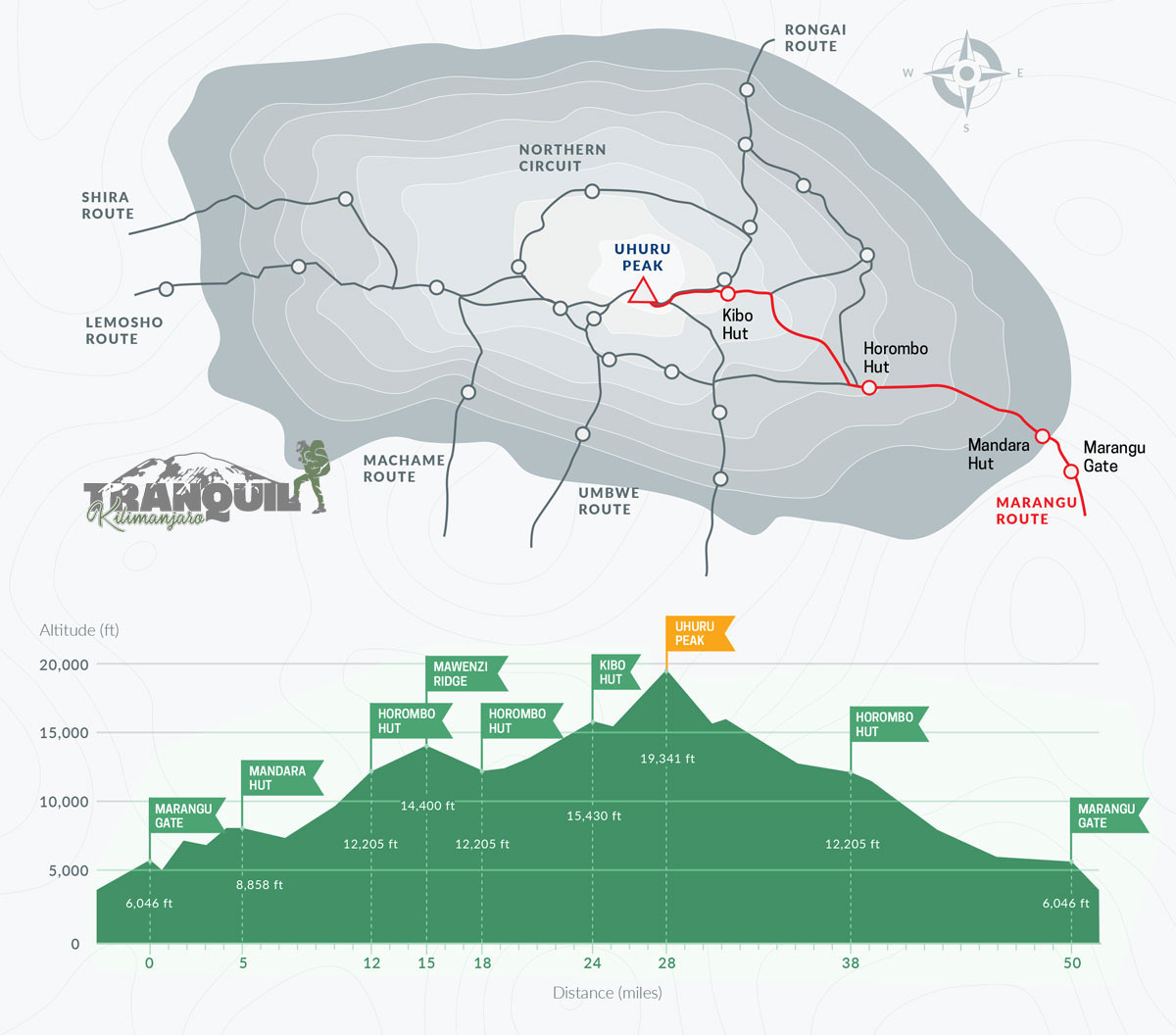 How to summit, with 5 Days Marangu Route Climb.

This short Mount Kilimanjaro route tour can be made very possible with vigorous training, drinking a lot of water, and having previous experience in climbing high-altitude mountains and altitude sickness.

5 Days Marangu Route at a glance

Trail conditions: The 5 Days Marangu Route climb, will take you through a variety of vegetation zones namely: misty forests, moorlands, alpine desert area in the Saddle, and paths with rock outcrops and snow towards the very top of Mount Kilimanjaro.

Below is a day by day glance at a typical 5 day Marangu route itinerary for climbing Mount Kilimanjaro.

After early breakfast and briefing, leave Moshi town to Marangu Gate (45 minutes) for registration, and paperwork to meet up with your Mount Kilimanjaro crew to begin the 5 Days Marangu Route climb. You will hike through the rainforest to the Mandara hut Camp. To get the best out of this hike, a side trip to the Maundi Crater rewards you with beautiful views of the environment that lies at the Kenya-Tanzania border. If you are lucky enough, you will spot amazing birdlife, Colobus Monkeys, and Eucalyptus trees.

Gradually ascend the moorland vegetation zone of Mount Kilimanjaro via the Marangu Route on a trail that leads to the Horombo Hut Camp. Even though this area that has giant lobelias and groundsels reward you with amazing and beautiful views of the Mawenzi and Kibo peaks, you might begin to feel the effects of Altitude sickness.

The third day is the day for preparing to reach the Uhuru Peak Summit. After hiking up the mountain towards the saddle of Mount Kilimanjaro, sandwiched between Kibo and Mawenzi peaks, you will pass by the last watering point. You will head to your hut at Horombo for dinner and rest as you prepare to summit in the middle of the night. The vegetation zones that you will go through include heath and alpine desert at the top of the mountain.

You will wake up very early at around midnight to 2 am, to begin the push towards the Uhuru peak summit. This is one of the biggest challenges on Mount Kilimanjaro as you embark on steep, scree-filled ground towards Gilman’s Point at the crater rim on your way to Uhuru peak at night and against extreme cold weather, winds, and darkness.

Once at the summit of Uhuru peak, you will be amazed at the breathtaking views on top of Africa’s Rooftop, Mount Kilimanjaro. Make sure you take summit pictures.

After spending some time at the top of the mountain, it is time to descend as you make a stopover at Kibo for lunch on your way to the Horombo hut.

After breakfast, early in the morning, you will descend through the same Marangu Route that took you up the mountain to the summit a descent trek that crosses moorland vegetation that leads to Mandara Hut and eventually through the path that traverses the rainforest zone ending up at the Marangu gate.

At the gate, you will receive your Mount Kilimanjaro summit certificates then drive back to your hotel in Moshi town or Arusha City marking the end of your 5 Days Marangu Route trek

The cost of climbing Kilimanjaro via the Marangu route – five days  is as follows.

All transfers to the mountain and back to your Arusha hotel

What is the success rate of the 5 Days Marangu Route?

Due to the lack of an acclimatization day added to the 5 day schedule, the 5 Day Marangu route has a 40 percent success rate.

What is the duration of the Marangu route?

The Marangu path takes 5 to 6 days to complete, with a total distance of 72 kilometers (45 miles)

Is the Marangu Route the best way to climb Kilimanjaro?

What is the cost of climbing Mount Kilimanjaro’s Marangu route?

How much do you tip a porter on the Kilimanjaro Marangu route?

To climb Kilimanjaro via the Marangu Route, how fit do I need to be?

When is the ideal time to climb the Marangu Route on Mount Kilimanjaro?

The ideal months to climb Kilimanjaro are January and February, as well as July through October, if you choose to take the 6-day Marangu Route.

June and December are overcast and wet, but they are still decent months to climb Mount Kilimanjaro, albeit not the finest.

Why is the Coca-Cola route known as the Marangu route?

The Marangu Route is known as the “Coca-Cola” route since it was the only route where Coca-Cola sodas were offered in tea huts a few years ago.

What is the appeal of the Marangu Route?

This route is well-known since it is the only one on the mountain that employs huts as a kind of climbing lodging. 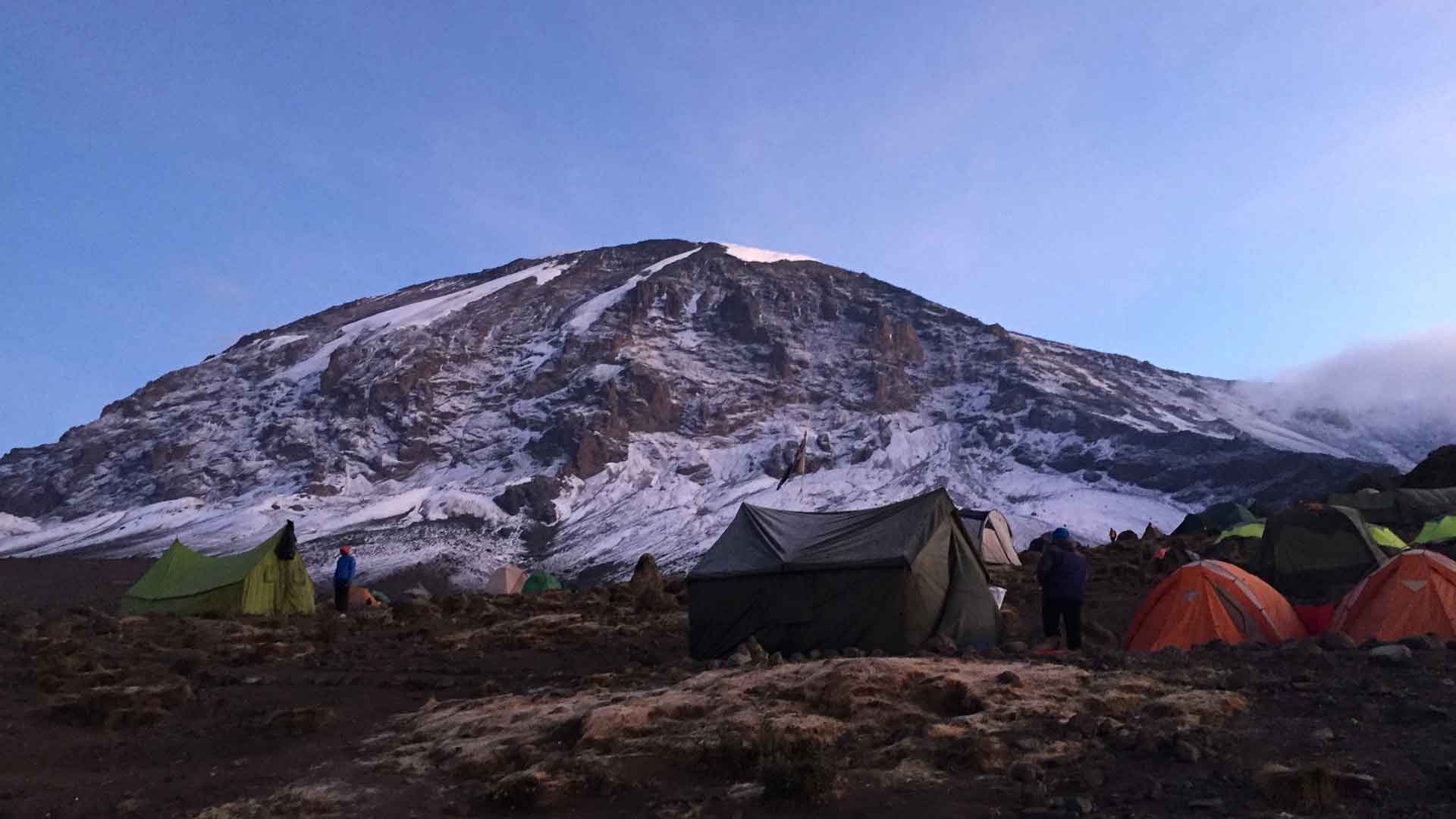 The Machame route which goes by the