6 reasons why you should climb Mount Meru

6 reasons why you should climb Mount Meru

There are many reasons to climb Mount Meru, the second-highest mountain in Tanzania but in this article, we will summarise it into 6 good reasons, why Mount Meru is a great trekking destination. The sixth tallest peak in Africa, Mount Meru is a conical volcanic mountain that rises to a height of 4,566 meters above sea level. The wildlife region surrounding the Momella Lakes and Ngurdoto Crater was formally designated as a protected area in 1960, giving rise to Arusha National Park, which includes the mountain. Mt. Meru, which is part of Tanzania’s Northern Circuit, frequently draws tourists who wish to travel the country. The park has been known by three names. Ngurdoto Crater National Park came first, followed by Meru Crater National Park, and lastly Arusha National Park.

The distance between the park and the Kilimanjaro International Airport is about 30 kilometers.

Read: Where is Mount Meru Located

In the park, there are a few lodges, a few campsites, and two climbers’ huts where visitors may relax and regain their energy before their Tanzania trip. The park now covers 137 sq km, but there are plans to expand it by extending it into the nearby buffer zone.

The parks’ attractions include craters, lakes, forests, and wild animals. Giraffes, elephants, buffaloes, zebras, and other large mammals can be found in large numbers in the park, along with many different species of birds, including flamingos. If you don’t dare to visit, your trip to Tanzania will be incomplete.

The suggested time to ascend the peak is three to four days. Book the 4 days Mount Meru Trek here

Despite the possibility of rain in November, the ideal months to climb Meru are from June to February. The months of December through February offer Meru’s greatest views of Kilimanjaro. When touring Tanzania, this is a moment you wouldn’t want to miss.

Below are the six reasons that we have put together on why you should climb Mount Meru.

The smaller brother of Kilimajaro is frequently hiked as a warm-up for the larger sister, Kilimanjaro. Altitude sickness, which may be extremely hazardous & life-threatening, is less likely to occur the more time you give your body to adapt to high altitude. It is an excellent option to spend more time at altitude and make your Kilimanjaro hike that much more pleasant because the peak of Mt. Meru (14,980ft) is at the height of Kilimanjaro’s two highest camps.

To do this, you must hike them back-to-back; begin your climb of Kilimanjaro the next morning or the morning after hiking down Meru. Meru’s summit will not help you with your acclimatization to Kilimanjaro if you don’t climb it immediately after Kilimanjaro.

Although doing so can much aid in acclimatization, one shouldn’t thereafter try an ambitious ascent of Kilimanjaro. On such a challenging walk, that is never suggested; always follow the tried-and-true strategy of “pole pole,” which translates to “slowly slowly.” Those who climb Meru first, then Kilimanjaro, and heed their instructors’ instructions seldom experience difficulties on Kilimanjaro’s summit night. Finally, it is advisable to remember that the Mt. Meru trip is challenging.

Despite being a shorter walk at a lower elevation, it is nevertheless difficult and demanding. In addition, it is steeper than the majority of Kilimanjaro routes. A successful hike requires thorough training and planning. 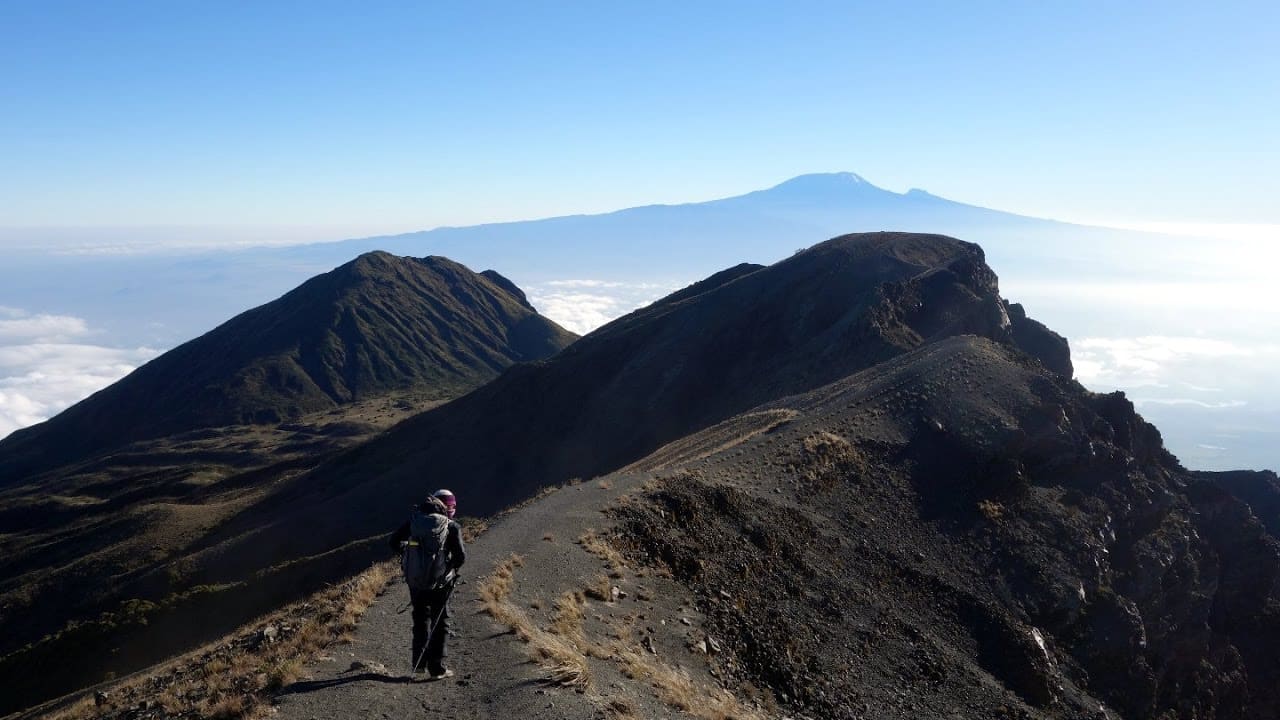 Fewer people visit Mount Meru’s virgin forests, which are rich with wildlife than Mount Kilimanjaro,  or Mount Kenya. Arusha National Park, where Mt. Meru is located, has the greatest giraffe population in the world as well as wide grasslands that are home to buffalo, zebras, elephants, antelopes, and warthogs. You have a good chance of coming across a lot of the huge fauna that inhabits this unique alpine habitat. For this reason, the nation mandates that trekkers travel with an armed guide.

Keep a look out for birds such as eagles, falcons, hornbills, cuckoos, and falcons perched above you as you go out of the savannas. The canopies above are also home to baboons, blue monkeys, and black-and-white colobus monkeys. Those with keen eyes can also find amphibians and reptiles, including frogs, chameleons, tortoises, green mambas, and pythons. Even though they are less visible, nocturnal creatures like porcupines and leopards may be found living on the hillside. Trekking Meru is an exciting journey into the animal realm because of the variety of vibrant and wild species that call its slopes home. 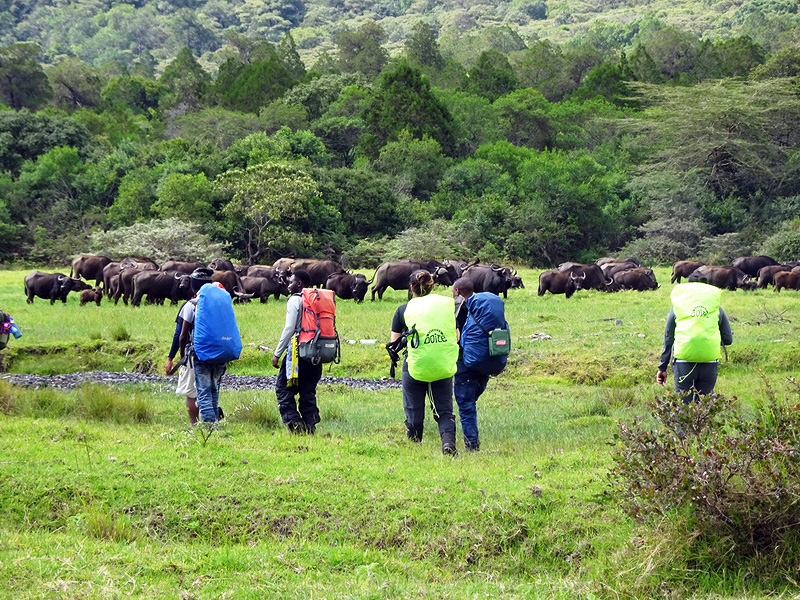 The soil on Meru is healthy and nutrient-rich since it was once a dormant volcano, something we have to thank for its flourishing vegetation. Fruit like wild mangoes, African olives, and even figs may be found in the lower woodlands. It is not unexpected that a thriving butterfly population is supported by the nectar of wild orchids, lilies, and violets, which also fills the forest with a lovely scent. The famed Arched Fig Tree, which has created a natural tunnel large enough for an elephant or a vehicle to pass through, will be your first stop on the first day. Giant lobelias and groundsels that resemble those on Kilimanjaro may be seen further up the mountain in the heather zone. As you get closer to the peak, the final vegetation zone transforms into a rocky alpine desert with sporadic tufts of grass.

Ascending through the various vegetation zones on Mount Meru will astound anyone with an interest in ecology. 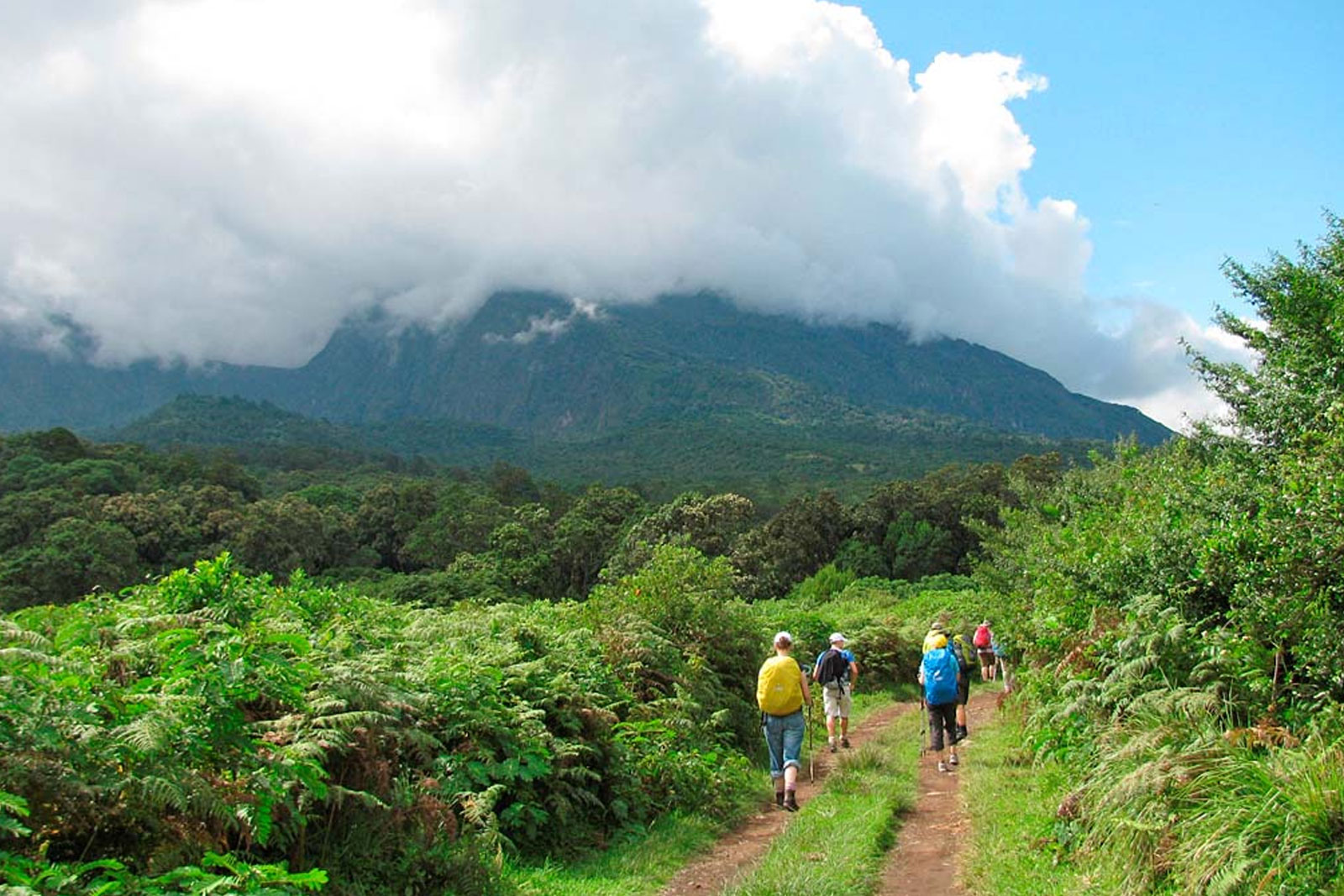 4. One of the most beautiful treks in Africa

There are many intriguing sights to view on the ascent, including historic cottages and a string of waterfalls tucked away in the tropical jungle. The ascent will continue through gorgeous glades and woodlands. The breathtaking Momella lakes are also visible in the valley below you once you arrive at Kitoto Camp. If there are no clouds, you may also be able to see Meru’s summit from Rhino Point, which is located higher up the mountain. The summit of the horseshoe rim offers the mountain’s greatest views, though. As you traverse the sheer ridgeline, it’s a mix of the most thrilling and stunning trekking in East Africa. The ash cone may be seen while looking down into the crater from a thousand meters above. The immense expanse of Meru, which is 70 kilometers west of Kilimanjaro, fills the whole Eastern horizon. The months of December through February are cloudless, resulting in crystal-clear views of Mount Kilimanjaro. The city of Arusha is located on the other side of the crescent, outside the lush plains of Arusha National Park, and may be plainly seen in the early morning by its lights. Enjoy captivating views of Kilimanjaro as you descend after admiring the views of Little Meru to the north of the peak. 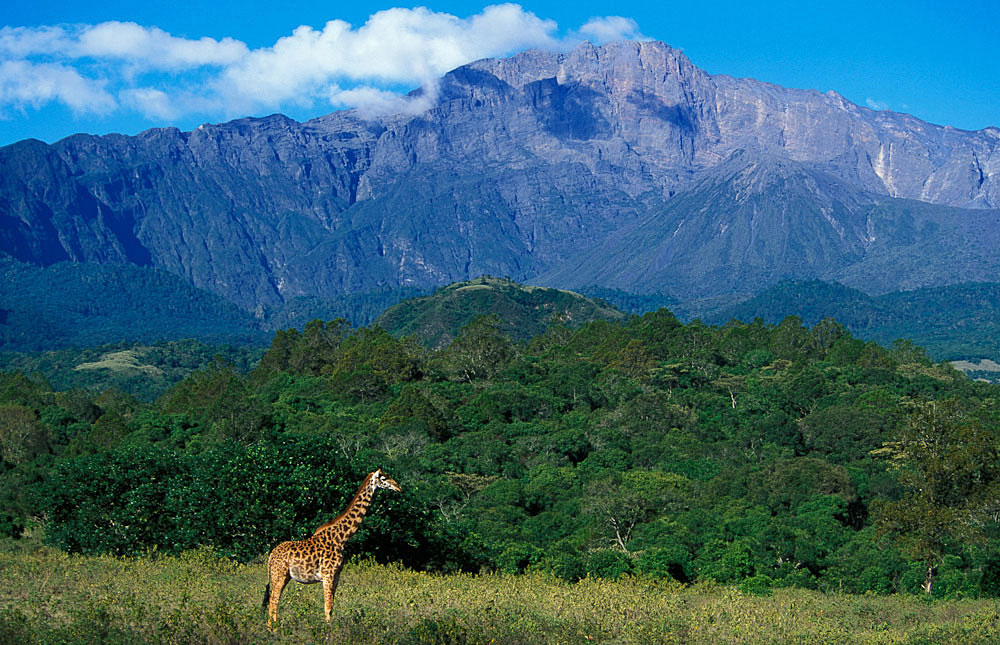 Undoubtedly one of Tanzania’s best-kept secrets is this pristine hiking paradise.

Check out 5 of the most beautiful routes on Mount Kilimanjaro

An estimated 35–50,000 individuals attempt to climb Mount Kilimanjaro each year; to put that number in perspective, throughout the climbing months, there are often 170-200 new climbers beginning at the mountain’s foot. Due to Kilimanjaro’s popularity, “traffic jams” may occasionally occur on some of its busiest routes. Mt. Meru is a tranquil oasis of tranquillity in contrast to this tourist-filled madhouse. It is less commercialized and the trail huts are in better shape because of the lower number of tourists. Many hikers who have climbed both summits prefer Meru over Kili because it is less congested.

How I climbed Kilimanjaro and avoided the crowds

You will be tested beyond what you previously believed your physical and mental limitations to be on both summits. It’s critical to have an experienced, astute, and committed support staff accompanying you when ascending to elevations of thousands of meters. The only choice left is the caliber of the team you want to spend a week on the mountain with you because having guides on the mountains is a requirement. Our trekkers are inspired by our guides‘ never-ending enthusiasm, which creates lifelong memories for you. A safe and pleasurable hiking atmosphere is created by their combined experience of over 100 successful summit attempts, Wilderness First Aid certification, and personal knowledge of the mountain.

Make lifetime friends while taking in endless tales about the mountain and regional customs while jamming to their favourite music playlists.

The Momella Route requires 3–4 days to get to the top of Mt. Meru, also known as Socialist Peak, which is located at 4,980 feet. Although there were alternative routes up the northern side in the past, Momella (on the East) is currently the sole permitted path. The journey begins at Momella gate and goes past coffee farms on alpine terrain before ascending into Meru’s sunken crater. Before climbing the peak and returning down, visitors spend each night in a mountain hut, beginning with Miriakamba Hut and moving on to Saddle Hut. Overall, it is a more tranquil and reasonably priced option to Kilimanjaro with stunning views of the crater.

There are a lot more solid reasons than the ones we’ve listed here to climb Meru. You’ll undoubtedly enjoy hiking this lovely mountain given the breathtaking vistas, the astounding biodiversity, and our fantastic crew! We can assure you that this trip won’t be one you’ll regret taking, whether you choose to trek it independently or alongside Kilimanjaro. We really hope this post was useful, and we would be happy to assist you to arrange your vacation. Don’t be hesitant to get in touch! Please let us know how we’re doing by giving us likes, leaving comments, and joining our email list.

TranquilKilimanjaro
Previous postIs Mount Kilimanjaro in Kenya or Tanzania?
Next postWhat’s The Best Time Of Year To Climb Kilimanjaro?