Climbing Kilimanjaro is one thing, but to climb this lofty giant of a mountain with camels is another! Climbing Mount Kilimanjaro has long been a dream of thousands of travelers all over the world.
Consider attempting Africa’s highest peak with two hesitant camels as part of your squad.
A group of mountaineers from the United Arab Emirates set out on a symbolic quest to be the first in the world to scale Kilimanjaro with the normally desert-dwelling creatures.
Awad Mohammed Majrin, a Dubai adventurer, wanted to put his country on the map for something other than record-breaking structures.
The 48-year-old Emirati also planned to raise the UAE flag for Emirates Travellers, an organization he founded to help other explorers realize their ambitions, at the 5,895-meter summit. 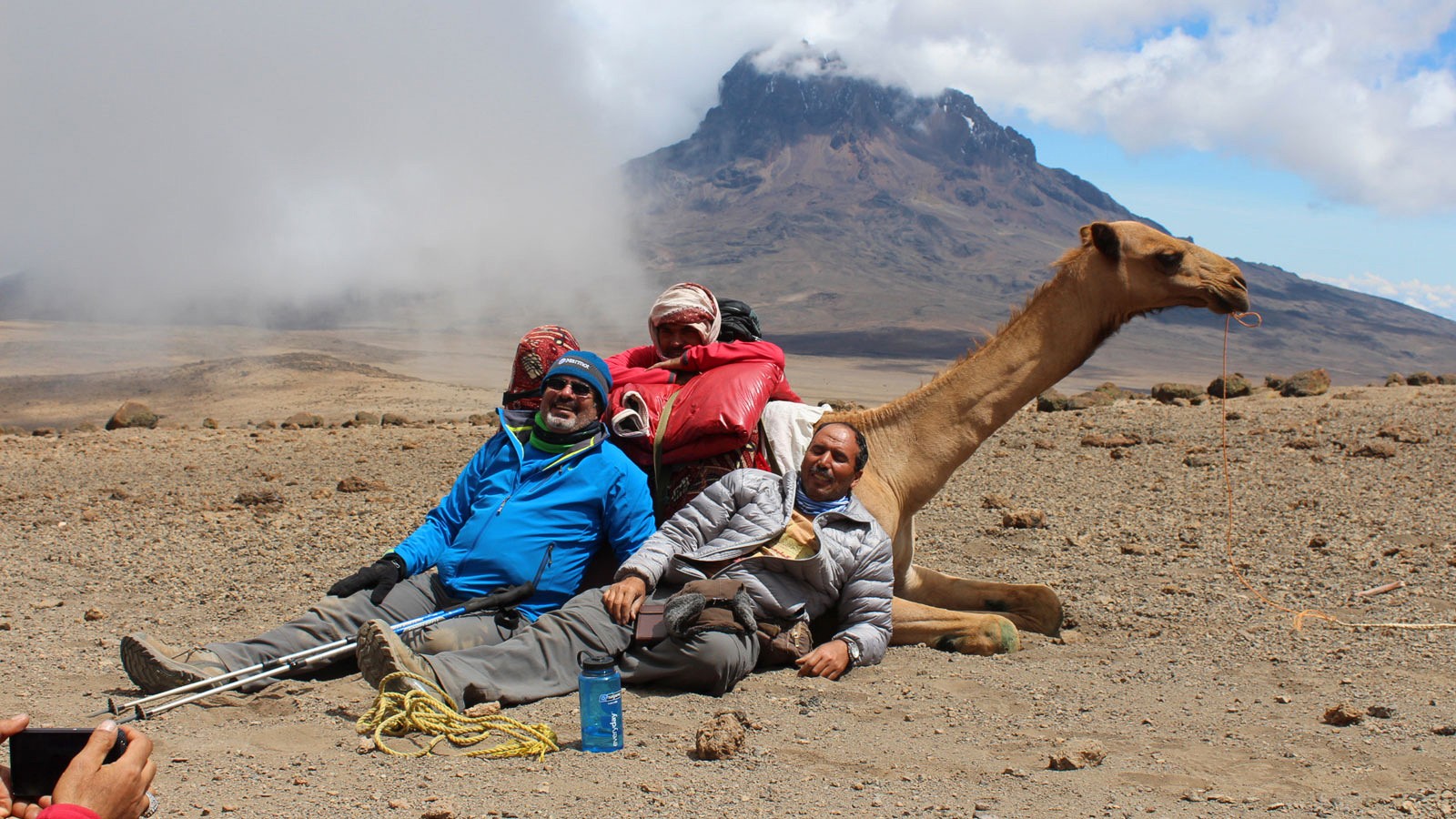 “A lot of people climb Kilimanjaro, but when you say by camel…” adds Majrin, who also runs his family’s real estate business during the day.
Intervention by the king
Majrin, Saeed Al Memari, the first Emirati to climb Everest, and Ahmad Al Qasimi, a retired Yemeni military veteran who attracted Majrin’s attention with his goal of becoming the first to cross Africa by camel, formed a six-member squad.
The first big stumbling block arrived before the men had even picked up a backpack: Tanzanian authorities initially refused to issue a permit for the men to ascend the top with an animal, let alone two camels.
Fearing for the safety of their one-of-a-kind excursion, Majrin and his colleagues at Emirates Travellers appealed to the Crown Prince of Dubai’s office for assistance.

Sheikh Hamdan bin Mohammed bin Rashid, himself an experienced horseman and man of action (see photo of Sheikh Hamdan bin Mohammed bin Rashid on top of the world’s tallest structure, Burj Khalifa), got authorization for the expedition to climb.
Before the 10-day climb last December, Emirates Travellers had only three weeks to plan an adventure that would normally take months of planning, including training camels Zabeel and Al Shindagha.

“Climbing Kilimanjaro by Camel,” a recent documentary, depicts the difficulties experienced by the guys and their camels.
Shifting weather patterns, freezing temperatures, and a lack of oxygen, as well as damaging, rugged roads, proved difficult for the camels’ gangly legs.

Majrin explained that this entailed paying particular attention to ensure that the animals, who were only ridden and employed to carry provisions for a portion of the journey, were not harmed.
“Even for us, it was difficult to breathe, and there was snow,” he says, “but we took care of the camels to keep them warm.”
It was a group effort.

“We didn’t celebrate too much when we got to the top because we knew going back would be difficult due to the camel’s long legs.”

The Emirates team made it up and back to the park entrance with no injuries thanks to patience and the knowledge of local guides and porters.
Majrin says, “It was a one-of-a-kind experience and a really great sensation to make it.”
“We didn’t expect it to be that difficult, but it’s in your blood when you go on a vacation, even if you think you should quit.”
Kilimanjaro was praised as a success for Emirates Travellers, which was founded in 1996 with Majrin as team leader, and the annual Dubai Travellers Festival, which he chairs.
Majrin was motivated to climb with camels during a prior festival meet, where he had asked Ahmad to join other explorers to discuss previous excursions.

“This guy wanted to travel across Africa by camel,” Majrin recalls. “He informed me about his fantasy while traveling around Asia and other Arab nations.” Because the camel is associated with our culture, we approached the Crown Prince’s office for support. We organized the trip as a group, and we paid him a visit in Ethiopia to encourage him.” He rode a camel 9,000 kilometers from Yemen to South Africa in a year, setting a new world record. “Camels in Africa
“Africa by Camel,” a YouTube documentary, depicts Ahmad’s struggles in 2013, including being shot at in lawless parts of Africa and being attacked by a hyena while sleeping.

Majrin may have been inspired by Ahmad’s story, but the Emirati had already achieved his own first by leading an Arab team on a car trip across the world.
“Most people tell you not to dream too big when you start a concept,” Majrin says of the epic trip.
“Some people told me, “You can’t do it.” However, I began meeting with pals, and they were enthusiastic about the notion. It was a goal for a group of Emiratis to travel around the world and deliver a message of peace to each country we passed through.”
The 4x4s began their journey in Abu Dhabi, UAE, then traveled via the Middle East, Turkey, and Greece before shipping to Italy and the rest of Europe.

They saw Sheikh Zayed (the UAE’s founder) in Geneva, and he ordered all UAE embassies to assist the team.
That historic journey took place in stages over six years in the late 1990s and early 2000s, culminating in a book and exhibitions to encourage folks back home.
Majrin’s hunger for adventure, however, was not sated, thanks in part to tales told by other travelers he met while crossing countries.

“We met a lot of individuals, swapped stories, and stayed in touch, and we came up with the concept of organizing a festival in Dubai with all those people.”
The first event took place in 2012, and it has been held every December since then. Each year, the number of adventurers invited has become larger and more diverse, with audiences numbering in the thousands. 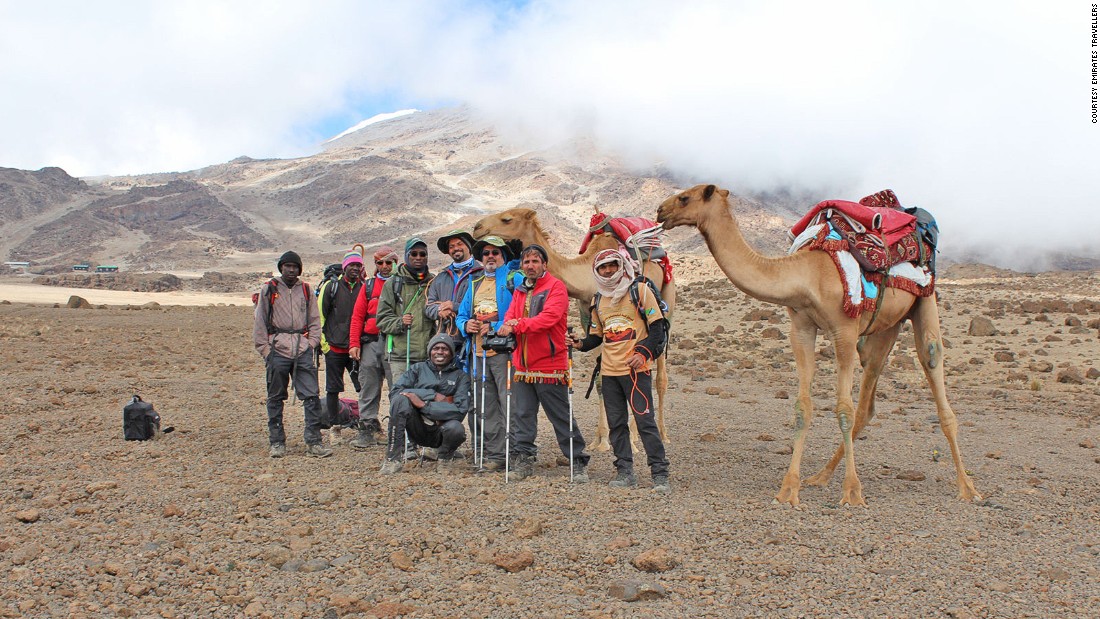 Festival organizers finance each candidate’s flights and lodging in the emirate once they have been vetted. This year’s event will take place from December 16 to 19, at an undisclosed desert location.
Majrin’s colleagues had to go out and find participants at first.
The event has since gained popularity as a popular forum for all to publicly relive their adventures.
Majrin contains photos of former guests, including a Russian man who cycled around the world for 21 years and a South African who traveled around the world by Microlite, as well as an English woman who solo motorcycled from London to Cape Town then from North America to South America.
There’s a cheerful American man who rode a horse for six years from South to North America.

Another snapshot depicts an Argentinian husband and wife pair who traveled the world in a classic automobile for 14 years, giving birth to four children along the way.
A Frenchman described his solo voyage from Bangladesh to France, as did a Canadian man who walked around the world for 11 years.
‘Weird, yet happy.’
A man who rode horses from Mongolia to Hungary in two years and a Malaysian teacher who cycled from Malaysia to London in his 70s have both previously attended the festival.
“Most tourists… there is no location collecting them to share experiences,” Majrin says, adding that guests will have the opportunity to display images and speak to an audience.

“People were enthusiastic to hear their experiences, and the travelers were delighted to meet one another. When you look at their ideas, they appear to be odd and weird, but when they come here, they are pleased that their accomplishment is recognized.”
Majrin is still an avid traveler, but she prefers to organize other people’s treks, climbs, and walks, such as the Dubai Riders motorcycle club, which is planning a trip from Cape Town to Dubai, and the festival.
Consider sitting next to them. I ask the same question to most travelers and get the same answer.
“When you see a guy going around the world, you wonder why he does it.” “I just want to get away from everything and discover,” he says.

“It won’t make them rich,” Majrin says, pointing to the globe on his desk. “But it will make them wealthier inside.”
Visit http://bit.ly/1DaJjZn to see the film “Climbing Kilimanjaro by Camel.”