The Guardian reported on September 30, 1927, that a story about Miss Sheila Macdonald, a 22-year-old London girl, climbing Mount Kilimanjaro had just arrived in London, stating that it was “the first time the achievement had been completed by a woman.”

The next sentence describes how Macdonald “set the pace for her two male friends, slept in caves, supported herself with champagne sipped from the bottle, & how, even though one of the guys was forced to give up due to physical weariness, she carried on undeterred to the peak.”

The absurdity of trying to sip champagne out of a bottle at a height of more than 19,000 feet can only be understood by those who have experienced it.

It’s a vibrant image, even though the champagne could be overemphasized. 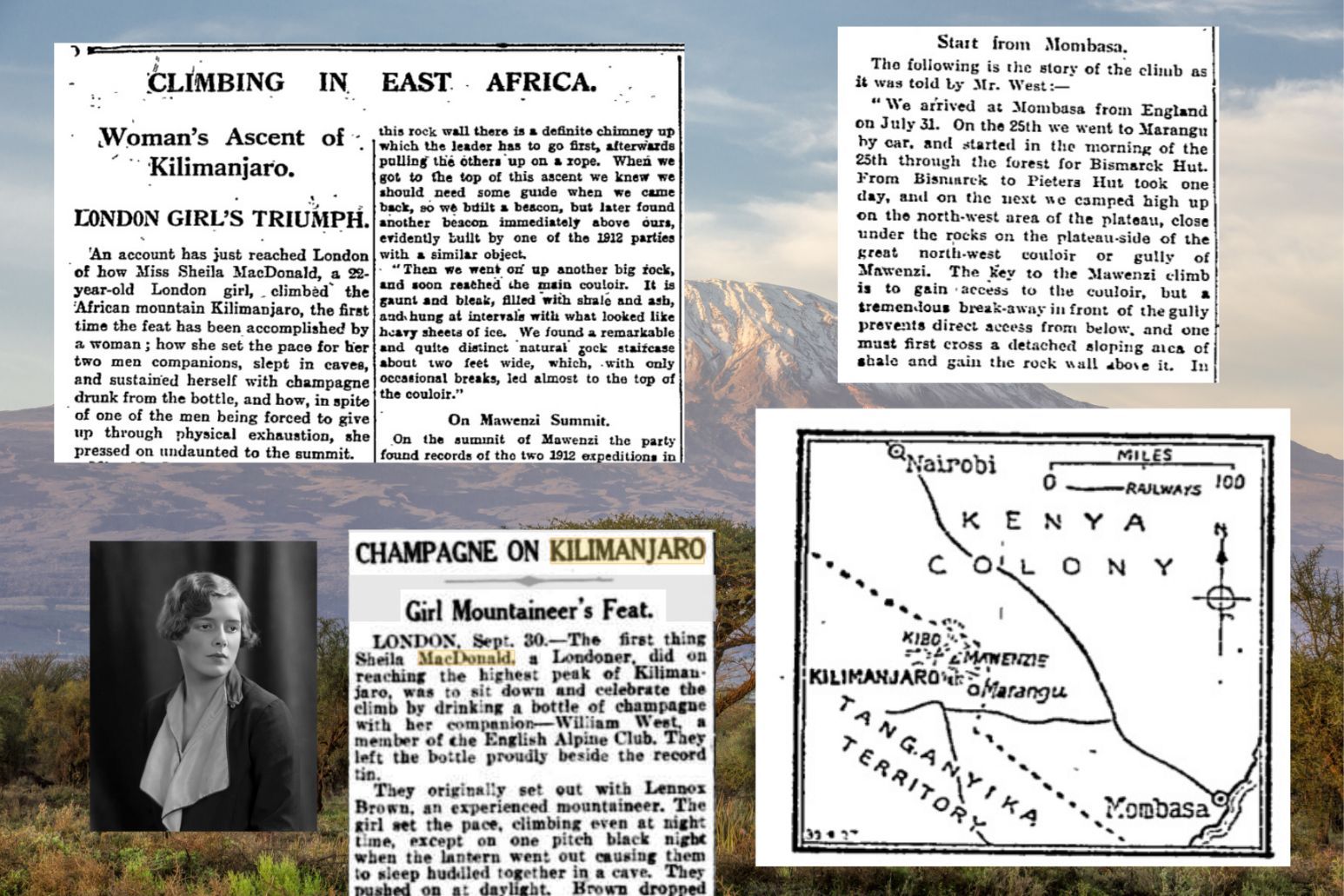 In 1901, Sheila Macdonald was born in Australia. Vice-president of the Alpine Club was her father, Claude. She received her education in Cambridge, where she excelled in rowing and also read Modern Languages. She was characterized as “a tall, well-built girl with shingled hair, who excels in outdoor activities and horse-riding” by The Guardian and has climbed in Scotland and the Alps. Prior to climbing Kilimanjaro, Macdonald scaled Mount Etna (3357m), which is located on the east coast of Sicily. He also climbed Stromboli, an active volcano in the Tyrrhenian Sea, with another female, and they both “risked a furious sea in a tiny open boat on their return from an ascent.”

In July 1927, Macdonald took a boat to East Africa, although she never intended to climb Kilimanjaro. The idea was to travel on safari while staying with her cousin Captain Archie Ritchie, the head game warden of Kenya. This plan was altered as a result of a fortuitous encounter with Mr. William C. West, who she had observed was sporting an Alpine Club tie, while traveling to Africa. West had offered Miss Macdonald to accompany him on his climb of Mount Kilimanjaro, it was revealed during the conversation.

Macdonald said, “For heaven’s sake, you know nothing about my capacity for climbing.” I am aware of your father’s notoriety, West retorted. I believe you could handle it rather well.

Go on Safari and ascent Mount Kilimanjaro (5,895m) via The Machame Route
Take the picturesque Machame trail to the top of Africa’s tallest peak, then relax on safari.

Macdonald recalled how thrilled she had been to accept West’s offer. She told the Oban Times that she only had boots to buy after collecting a pair of pants, socks, a wide-brimmed felt hat called a terai, and a pullover from several passengers who were quite interested in the endeavor.

Another boat passenger, Major Lennox Browne, inquired as to whether or not he might also join the celebration.

Lennox Browne was afterward described by numerous media as “a climber of some experience,” but Macdonald says, “He had never done any climbing, but he believed that I should not be ascending as a lone lady with a single male.” The Major’s justification for going on the excursion serves as a reminder that at the period, women frequently encountered “social outrage” just for hiking.

On July 21, the trio landed in Mombasa. Friends of Macdonald’s cousin Archie instantly disputed her claim, telling her to continue on to Nairobi and “forbidding” her to climb the mountain. Similar to her parents, who had anticipated that she would remain with them in Australia following Nairobi, they were “shocked and indignant.”

Related: A team of all-black women climbs Kilimanjaro for the first time.

Regardless, the group continued on to Marangu, where Macdonald saw Kilimanjaro for the first time. She remembers West telling her for the first time that they could now see the peak. You’re not looking high enough, West said in response to Macdonald’s claim that all she could see were clouds.

The height shocked Macdonald. It was amazing, she remarked. “If I can get out of this, I will,” I told myself. It was too late, though. It isn’t a stunning mountain. It is similar to Ben Nevis in that it is striking due to its size.

The chief of a nearby tribe blew a kudu horn as the group set off on their journey. On elephant paths, they moved through a deciduous forest.

We turned left around the crater rim and climbed, foot by foot, to the summit. That’s how it actually was. The relief is indescribable.
In the same, incredible Oban Times interview, Macdonald remarked, “The soldiers were quite respectful to me.” They instructed me to have the tent when we stopped for the first night and instructed them to sleep outside in their sleeping bags.

The group trekked to Pieters Hut (2712m), passing antelopes in large numbers along the way (3658m). On the plateau’s northwest side, high above, they set up camp. It was freezing. The ink Macdonald had in her knapsack solidified into a bottle.

The group quickly discovered a “wonderful and rather obvious natural rock stairway approximately two feet wide” that led them nearly to the summit of the couloir below Mawenzi (5,149m), the second-highest of the three peaks on Kilimanjaro. They discovered a food tin on the Mawenzi that included a list of individuals who had survived that far and put their names to it.

West said, “We toasted our arrival with fine wine sipped from enamel cups.”

Before starting their ascent on Kibo, the actual peak of the mountain, the next day, the party went back to the Pieters Hut to recover.

On the edge of the plateau, they attempted to locate Hans Meyer’s Hole, but were unsuccessful. West noted that “our intrepid lady friend located another cave which pleased her womanly instincts for comfort.”

At midnight, the group started their summit push, but they only had one candle, which wasn’t enough. It was deemed unwise to proceed since there was no moon and there was extreme darkness, according to West. Until daylight, the group gathered behind a rock shelter.

Choose The Machame Route to ascent Mount Kilimanjaro’s 5895m
The highest peak in Africa may be reached by hiking along the most beautiful path.

Within 100 meters of the peak, Major Lennox Browne was forced to turn back after becoming “overcome by physical fatigue.”

Macdonald “was undaunted and begged to be permitted to continue the ascent,” according to West. Naturally, I made the decision to continue as well, but Miss Macdonald established the tone as we resumed our journey. For a female, it was a difficult climb, but she persevered with admirable tenacity.

In an interview with the Oban Times, Macdonald described the challenges of the summit push: “After a decent dose of whiskey and lime juice, we reached the crater’s edge at Johannes Notch. We turned left around the crater rim and climbed, foot by foot, to the summit. That’s how it actually was. Imagine the sense of relief you felt when you realized we had reached the peak and leaned up against the summit cairn.

Only those who have done it can truly understand how ridiculous it feels to try to sip champagne out of a bottle at a height of almost 19,000 feet, West said in his account of their celebration. He recalled that they “took one or two photos, then drank a bottle of champagne.”

It appears that West was using some authorial license in this instance. Later, Macdonald remembered that they had “opened the [champagne],” but that due to the altitude, “there wasn’t a drop left in it. Not even a drop.

She says the ascent was simple and that Sheila Macdonald—who is now comparatively unknown—was featured in newspapers all over the world within a few weeks. Later, Macdonald claimed, “My pals were not in the least impressed.” They only truly considered the fact that we had made it through the jungle without any weapons.

The ascent of Kilimanjaro is much simpler than it was during the 19th or 20th centuries, when climbers had to risk blizzards and deep snow.

On October 6, 1889, a group led by the German geologist Hans Meyer reached the summit of Mount Kilimanjaro, marking the first climb of the mountain by either sex. Actually, English mountaineer Gertrude Benham was the first woman to summit Mawenzi, the second-highest peak.

She made the 1909 ascent alone when her porters refused to continue because they believed the peak was “bewitched” due to two skeletons and melting snow near a bonfire.

But Sheila Macdonald would be the first woman to reach the top of Mount Kilimanjaro and to sip champagne, or at least crack open a bottle, while there.

After returning to Nairobi, Macdonald confirmed that she had actually gone on safari with her cousin Captain Archie Ritchie. The Oban Times describes her 1931 marriage to Harold Percy Combe as “short and failed.” She later traveled to India and worked in a hospital in London during the war.

She later moved into retirement in Lochaber, in the Highlands, close to Ben Nevis, where she painted. She died in 1987 and was laid to rest at a location she had picked out just a few months earlier, in the foothills with a breathtaking view of Glen Spean.