Mzee Yohani Kinyala Lauwo – The first Tanzanian and African man to climb Kilimanjaro to the Summit, Uhuru Peak in 1889

Mzee Yohani Kinyala Lauwo – The first Tanzanian and African man to climb Kilimanjaro to the Summit, Uhuru Peak in 1889

The first person to reach the peak of Mount Kilimanjaro was Johannes Kinyala Lauwo, a Marangu army scout from Tanzania, who made nine attempts before realizing there was a crater in the company of Hans Meyer. This makes Mzee Lauwo not only the first Tanzanian man to reach the summit of Kilimanjaro, but also the first African man to do so. For the first ascent by non-indigenous climbers, led by Hans Meyer, who in turn became the first European and white man to climb Kilimanjaro to the summit Lauwo acted as a mountain guide on their expedition to the summit. This peak was named Kaiser-Wilhelm-Spitze or Kaiser Wilhelm Peak before being renamed Uhuru Peak after Tanzania gained independence. Born in 1871 and died in 1996, Mzee Lauwo was a Tanzanian, born and raised around the Kilimanjaro region and he came from the larger Chaggah tribe that inhabits the Kilimanjaro region. He was named Yohani Kinyala Lauwo, and Yohani is the Swahili form of the name Johannes or John.

In 1889, he served as the tour guide for Hans Meyer and Ludwig Purtscheller, and Meyer gave his name to the nearby Johannes’ Notch. To mark the climb’s 100th anniversary, the West German government constructed Kinyala a residence in 1989.

He claimed to have led Hans Meyer up Kilimanjaro several times previously. He said that before realizing there was an interior crater, he had ascended nine times. On the mountain, he also came across the leopard’s corpse.

What images come to mind when the name “Mt. Kilimanjaro” is mentioned? The phrase undoubtedly evokes romantic notions of personal development, difficulty, failure, and triumph. We have viewed images and heard tales.

The only things driving the first group of climbers up Mount Kilimanjaro in 1889 were their courage, desire, and naivete. The most frequent response to the question “Who was the first to climb Mount Kilimanjaro?” is Hans Meyer of Germany. The expedition’s inspiration is attributed to Hans Meyer, but who served as his mentor? 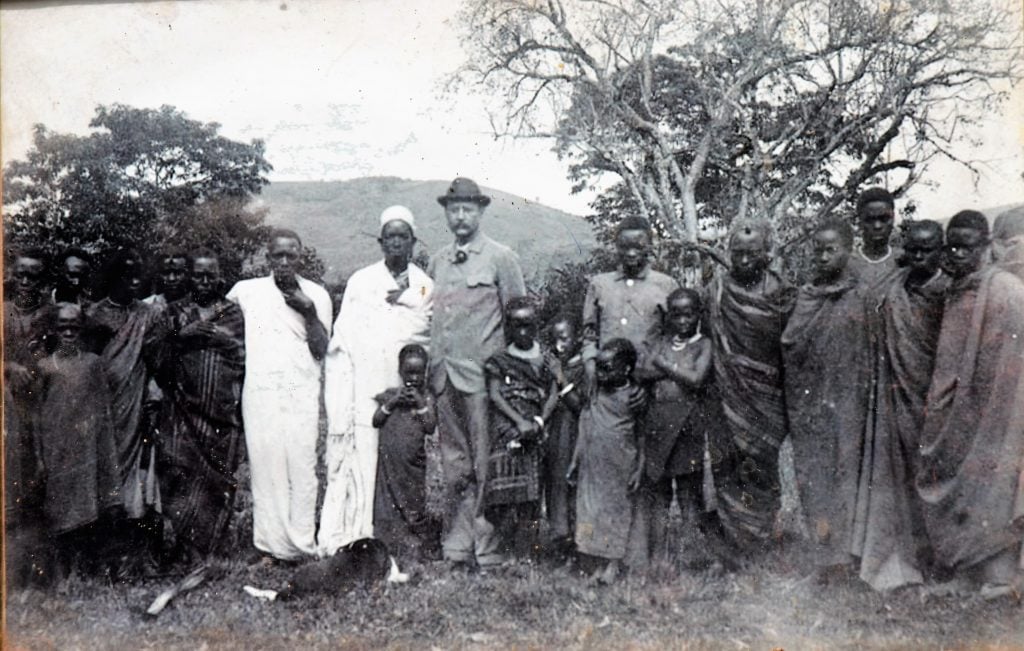 On October 5, 1889, Yohani Kinyala Lauwo, then just 18 years old, guided Hans Meyer and Ludwig Purtscheller to the highest peak in Africa. It was by mistake that the Mangi (Chagga leader) chose him to be Hans Meyer’s guide, but it irrevocably altered his life. He was known as Kinyala, and he spent his whole life in the Marangu settlement, which is tucked away atop Mount Kilimanjaro.

Many members of the Lauwo clan of the Chagga tribe hunted forest elephants for their ivory before European explorers arrived in East Africa and sold it to Swahili traders on the shore.
Additionally, the forest provided people with honey, lumber, medicine, and skins from Colobus monkeys. Kinyala Lauwo was a tall teen who was intimately familiar with the jungle when Hans Meyer first came in Chaggaland. In Kinyala’s native region by that time, colonization had already begun, and young men were being coerced into building roads. Kinyala attempted to avoid the “draft,” but she got snagged. He was thus called to appear in court in Mangi Marealle’s palace. Hans Meyer, who was coincidentally seeking authorization to climb the mountain as well as guides and porters, had just arrived at the palace.

Mzee Laowo was discovered by the Mangi’s Wachili (advisers), who recognized him as a member of the Lauwo tribe and invited him to lead the expedition.
The incident inspired Kinyala (later known as Mzee Lauwo) to lead hikes up Mount Kilimanjaro for more than 70 years! He had no other protection for his initial ascent except blankets. He accumulated proper apparel and trekking equipment throughout the years. The Tanzania National Parks Authority presented Mzee Lauwo with a stunning, contemporary home that was pastel-colored light purple and pink when he turned 100. After a long life of 125 years, he passed away here on May 10th, 1996, with his two wives by his side.

TranquilKilimanjaro
Previous postThe best way to fly to Kilimanjaro Airport from North America (USA) and London (England
Next postAfter the 2022 Wold Cup finals in Qatar, why not visit Tanzania for Kilimanjaro hikes and other top safaris