Which is the easiest Kilimanjaro route?

Which is the easiest Kilimanjaro route?

The Northern Circuit route could be the easiest route on Mount Kilimanjaro. We have come to this conclusion after much pondering, research, and reviews from expert mountain guides and past climbers. Yes, it may be the newest route on the mountain which is why it hasn’t had many comparisons like the other routes which have been existing on the mountain for ages.

The Northern Circuit Route is the longest route on Kilimanjaro, taking nine days to complete. It begins by climbing the Lemosho route on the mountain’s western side, reaching the Shira Plateau and the Lava Tower before turning north and clockwise circumnavigating the main summit massif to connect with the Rongai route. Following the ascent of the mountain’s top from its eastern side, the southern Mweka trail is used for direct descent.

Naturally, this route is also referred to as the Grand Traverse or the 360 Route and provides the whole Kilimanjaro experience, including all of the habitats and 360-degree views of the mountain.

With views across the southern flanks, western forest, northern plains to the Kenyan border, and the dry eastern slopes, the lengthier route offers great acclimatization and breathtaking scenery. The pathways are rather uncrowded and calm.

Additionally, the altitude rise per day is lower than on other routes, and there is a gentle gradient until you reach Kikelewa or Third Caves camp, so the likelihood of getting altitude sickness over the course of nine days is substantially lower. However, the trip is only 96 kilometers in total, not much longer than the other routes. A different route from School Hut that climbs directly up the northern slopes is around 79 kilometers long.

The Northern Circuit route is less popular and more expensive than the Southern Circuit, but in many ways, it is the finest choice for climbing Kilimanjaro away from the crowds.

Why is Northern Circuit the easiest route on Kilimanjaro?

Without wasting time, let us dive deeper into the main reasons that make this route, the easiest to take you to the summit of Kilimanjaro. Click here to book the 9 days Northern Circuit Itinerary.

First off, it’s the longest route (nine days), which provides your body plenty of time to acclimatize to the high altitude. Those who climb the mountain too quickly frequently experience altitude sickness and give up before reaching the top.

The Northern Circuit’s slight elevation gain on Days 5 and 6 is another argument in favor of it being the easiest Kilimanjaro route. Your body will benefit greatly from this in adjusting to the high altitude. It adheres to the “climb high, sleep low” philosophy of proper acclimatization.

The Northern Circuit’s lack of especially steep stretches is the third factor that makes it the easiest Kilimanjaro route. You ascend the mountain gently and gradually on its trail. Like the Barranco Wall, several of the other paths include steep parts. Speaking of route profile and slope gradients, some claim the Marangu route is the easiest route on Kilimanjaro but this was before the introduction of the Northern Circuit Route. 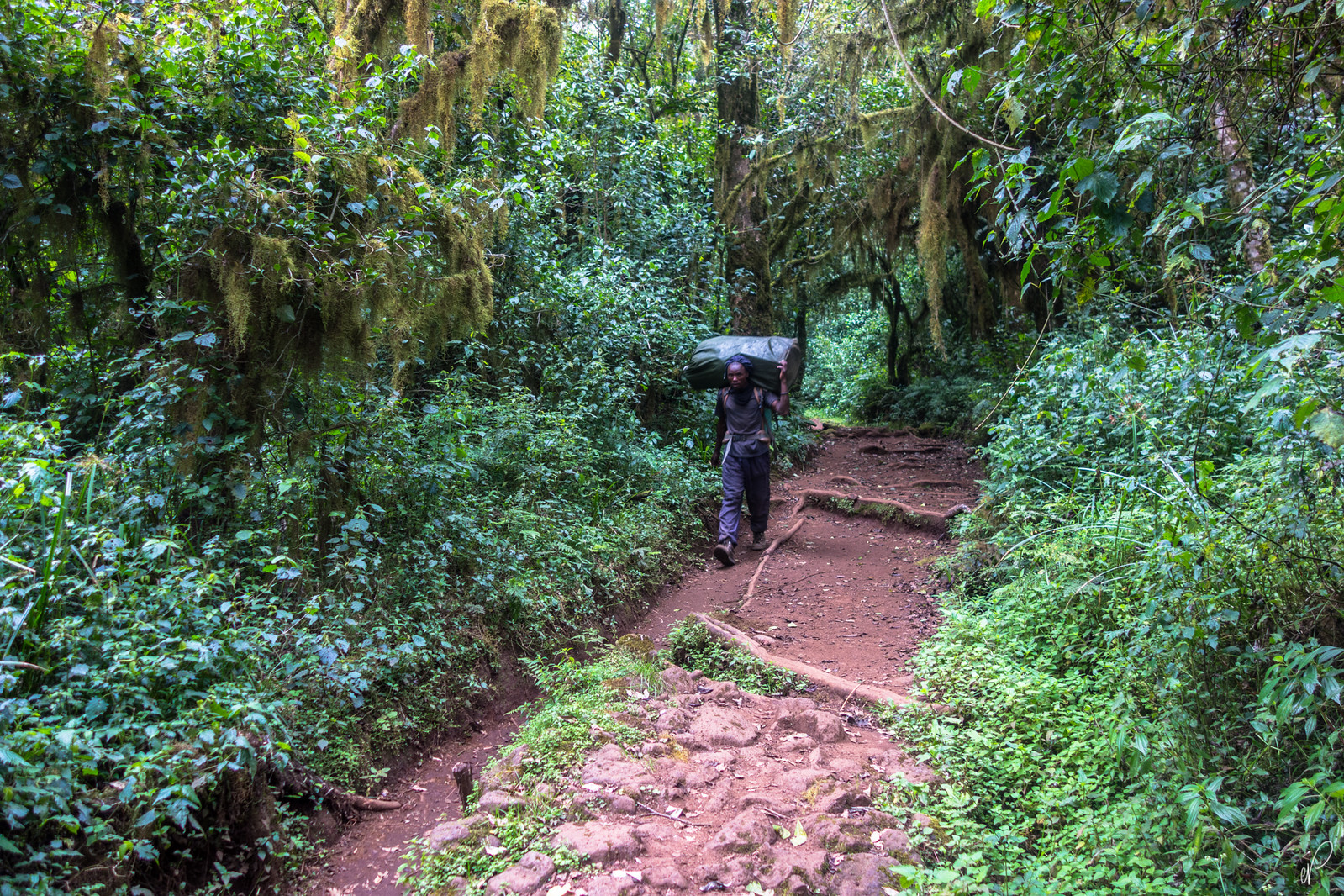 Is Marangu Really the Easiest Route on Kilimanjaro?

The Marangu trail is thought to be the simplest for climbing Kilimanjaro. Where did this idea originate? The gradient of the rise and descent on the route profile is primarily the reason.

The Route Profile of Marangu

Marangu often involves an uphill, steady climb that is followed by a moderate slope back to the gate. In terms of days, it takes the fewest—just five. Climbers do not need to camp along the Marangu route because it includes sleeping huts. Last but not least, the path merely appears like a friendly walk with a moniker like “Coca-Cola.”

But do not be deceived by these elements as the Marangu route is challenging because it takes a short time to climb using this trail, hence less time to acclimatize.

The five-day trek’s normal itinerary calls for a fast ascent, which hinders the body’s capacity to acclimatize. We must climb to higher altitudes gradually if we’re to adapt adequately to the dwindling oxygen. By all accounts, the body adjusts more successfully when the pace is slower. The Marangu route has a starting elevation of 6,046 feet and a maximum elevation of 19,341 feet. That’s a gain of almost 13,300 feet in only three and a half days (and a loss of 1,500 feet for a five-day route itinerary)!

It is understandable why so many attempts at summiting fail. For most people, the pace of increase is far too rapid. According to data from Kilimanjaro National Park, the summit success rate for the five-day climb is a pitiful 27%, making it clear that Marangu Route is not such an easy climb after all.