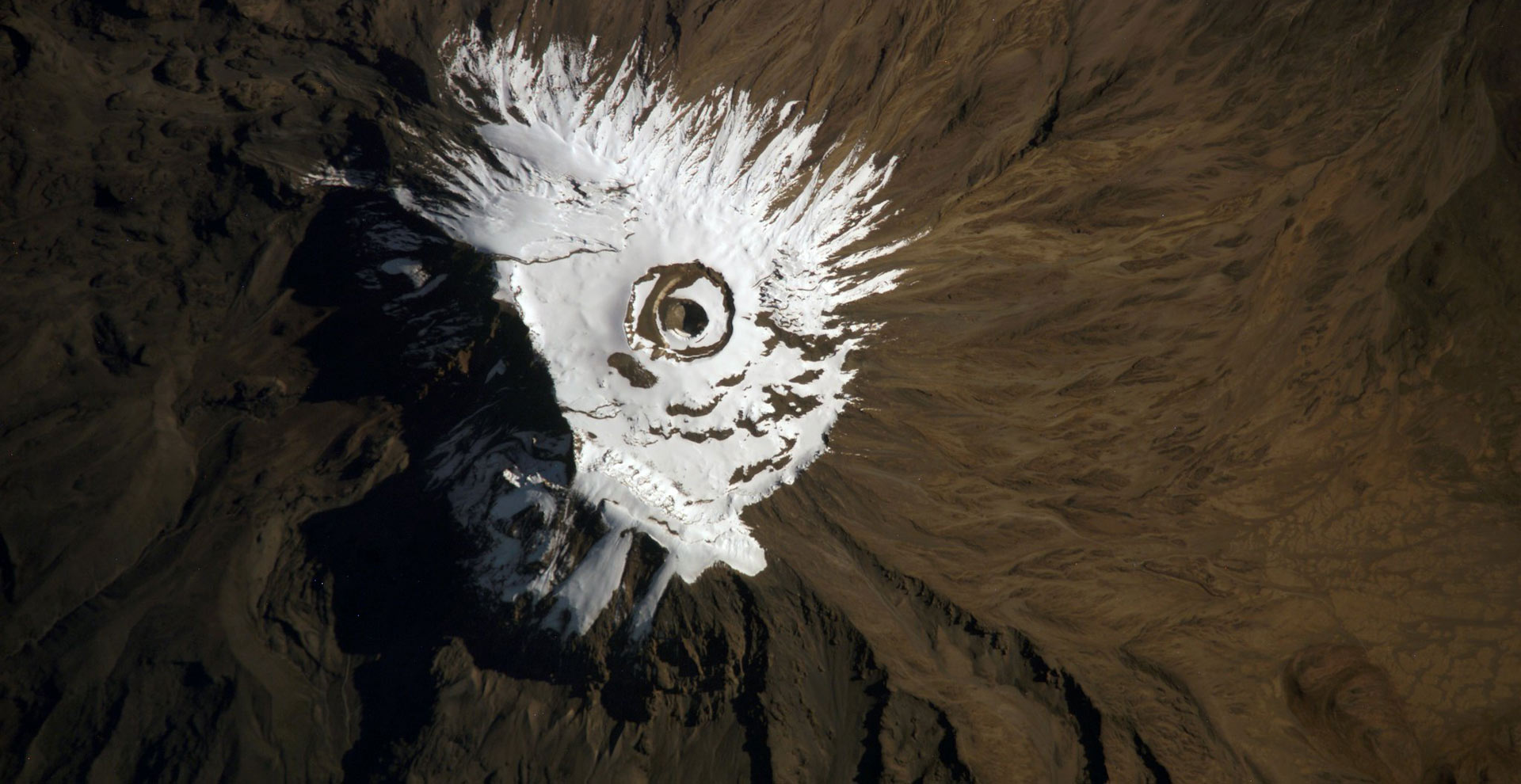 Kibo Crater is a depression that exists at Kibo Peak, which measures 2.5 km wide on the summit of Kilimanjaro’s highest volcanic cone known as Kibo. Mount Kilimanjaro has 3 cones and Kibo is the highest, followed by Mawenzi and then Shira. it is worth noting that some climbers prefer to camp at Kibo crater at a campsite known as Crater Camp. To sleep at Crater camp as it is popularly known, you will be required to get a special permit from the Kilimanjaro National Park Authorities (KINAPA).

Kibo has three overlapping craters within making it a somewhat unusual cone, due to a volcanic eruption that happened many years ago blasting off its top. 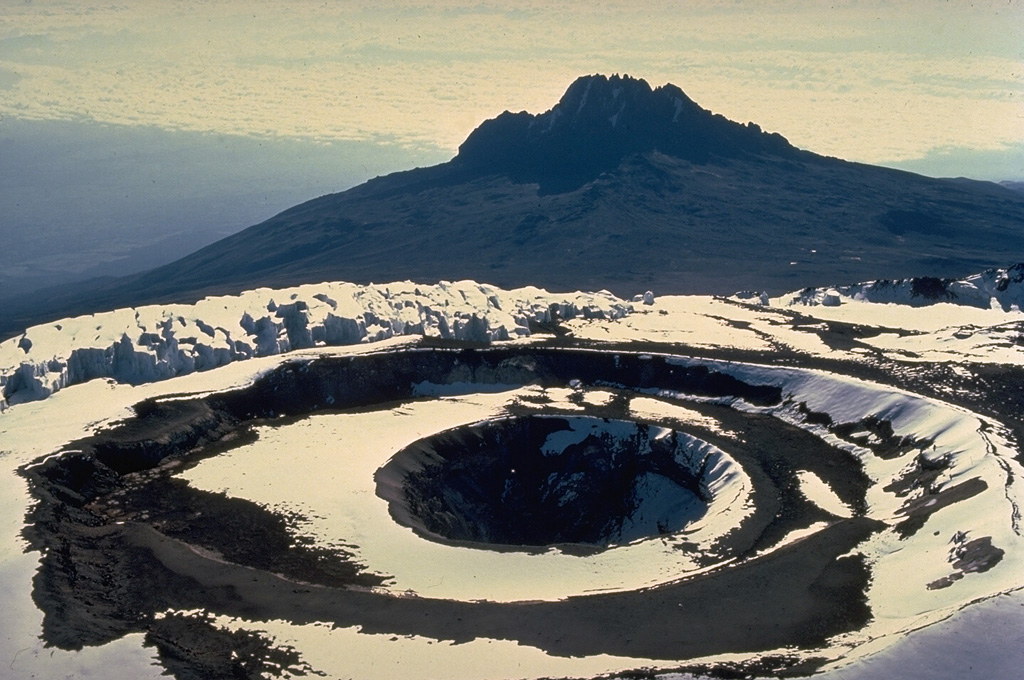 Uhuru Peak, the highest point on the mountain, is located on the rim of Kibo Crater, the outermost crater, which is roughly 2.5 km wide. At the summit of the Kibo cone, there is a dip where Crater Camp is located.

Ash Pit is located in Reusch Crater, the crater closest to the center.
The Inner Cone encircles the Reusch Crater. 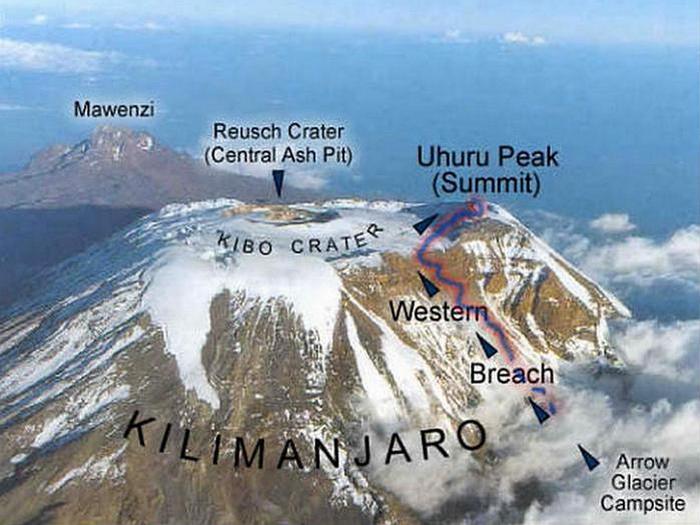 The Western Breach, now recognized as the result of a long-ago collapse of Kibo Crater’s western rim, was formed. This breach is illustrated in the photo shown above.

On the western edge of Kibo Crater sits Uhuru Peak, the peak of Mount Kilimanjaro and its highest point.

Within the main Kibo Crater, Crater Camp is located next to Furtwangler Glacier. In a minute, we’ll tell you more about this glacier.

Kibo Crater is absolutely deserted; setting up camp there would be like making a temporary home in an extremely harsh environment even though many climbers opt for this thrilling adventure of setting up camp at the crater of Kibo.

Learn More about how it feels sleeping at Crater Camp.

The Kibo Crater is located on one of the three volcanic cones that make up Kilimanjaro known as Kibo Peak. Kibo is dormant and may erupt again in the future, whereas the other two, Mawenzi and Shira, are extinct. The campground is located at an elevation of 4700m and is located underneath Uhuru Peak, the highest point on the rim of Kibo Crater.

A remarkable accomplishment that is often on many people’s bucket lists is climbing Mount Kilimanjaro. Some people find it simple to accomplish, while others may find it a little more challenging. But there are places along the entire ascent of this massive mountain that stand on their own as amazing accomplishments. This includes getting to the Kibo Crater.

Because of the scattered boulders that make up the snowy top, the crater’s name, Kibo, which means “spotted,” is a fitting one. The Rongai and Machame Route includes excursions to Kibo Crater. Both of these climbs last 8 days, giving you plenty of time to enjoy the breathtaking scenery as you make your way to the top of Kilimanjaro.

Tranquil Kilimanjaro also offers the 9 days Crater camp and Lemosho Route itinerary, a better version that features sleeping at the Kibo Crater for one night combined with our personal favourite itinerary, the 8 days Lemosho Route.

The black volcanic soil of Kibo Crater is famous for being contrasted with the white snow, and of course, the spotted rocks. The last section of the trip up Kilimanjaro, known as the Kibo Crater, will be the most memorable and thrilling. It is advisable to plan your tour to Kibo and Crater Camp through an authorized travel operator.