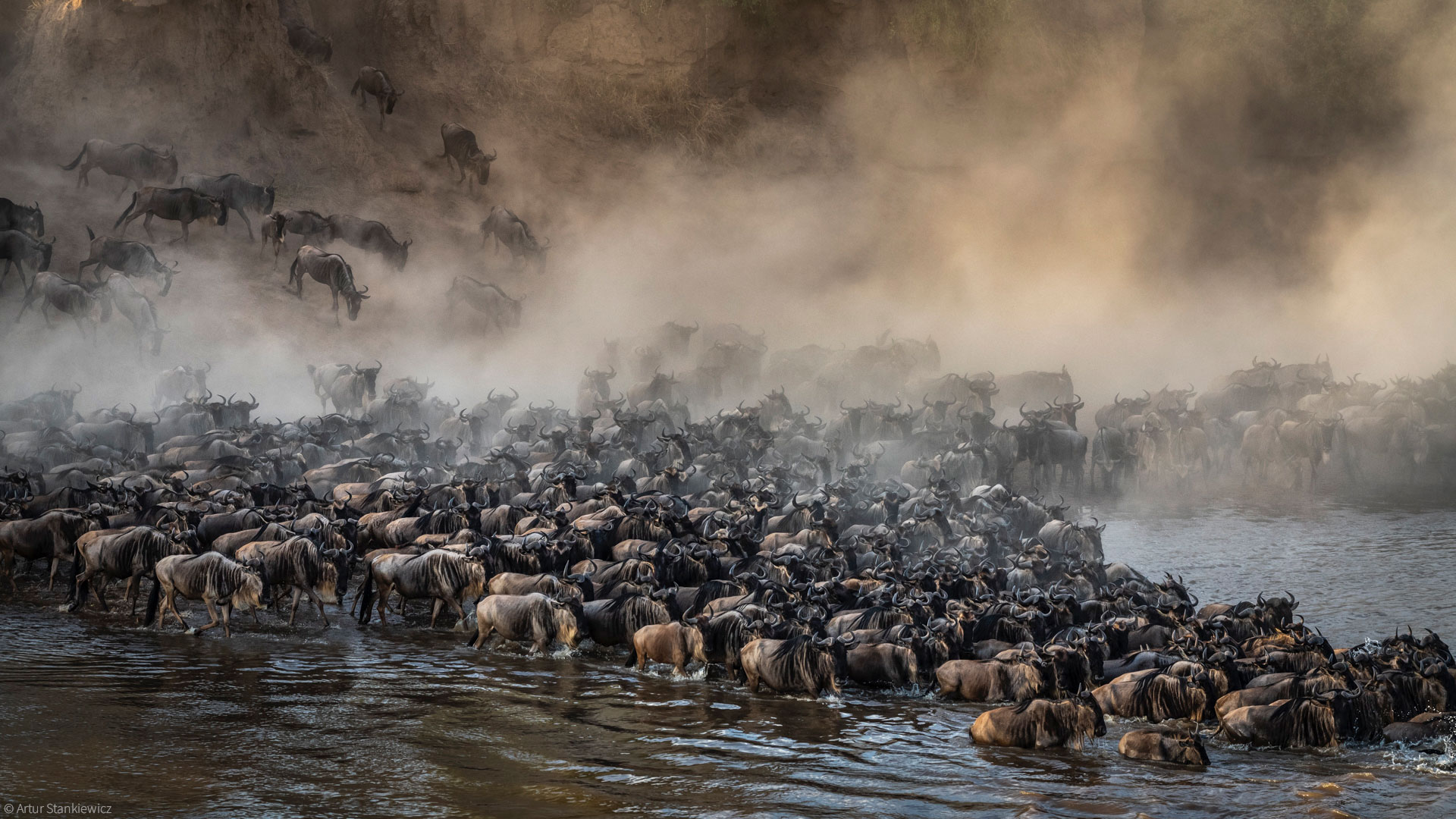 After your 6-day Marangu Route climb on the mountain you will take a flight from Kilimanjaro International Airport to Mahale Airstrip for a 4-day Chimpanzee trek on the Mahale Mountains, which is in a remote park next to lake Tanganyika called the Mahale Mountains National Park.

After trekking the Mahale Mountains which is home to human’s closest cousins, the chimpanzees, you will embark on a further 5-day safari to Southern Tanzania’s Mikumi National Park and Nyerere National Park, a new park dissected from the larger Selous Game Reserve.

Below is the day-by-day glance at the 17 days Kilimanjaro and safari itinerary in Tanzania.

You will be met by your tranquil Kilimanjaro guide, who will brief you on your forthcoming 17-day Kilimanjaro and safari trip and inspect your equipment to make sure you have all the appropriate mountain gear, when you are picked up at the Kilimanjaro International Airport and taken to your accommodation in Moshi town. On this day, you can hire any equipment that is lacking. At Weru Weru River Lodge, spend the night (or alternative)

You will be picked up from your Moshi lodging after breakfast and driven to the Marangu gate. You may start your walk as soon as the relevant paperwork is finished, and you will soon be traveling into the thick rainforest. As you make your way to the Mandara Hut, you will have the opportunity to see several primates in addition to the spectacular foliage. Your guide might drive you to the Maundi Crater where you can take in the breathtaking vista of Kenya’s interior after a well-earned break.

Breakfast is taken early in the morning. You will quickly cross the timberline and enter the heath and moor region after leaving Mandara Hut. The Horombo Hut, which is located at a height of 3700 meters, will become visible around 4 to 6 hours later. Fantastic views of Mawenzi, Kibo, and the expansive Masai Steppe may be seen from the hut.

The stage today is lengthy and challenging. The “Last Water point” is passed by the well-built route, which is thereafter followed by the alleged “saddle.” This mostly vegetated-free plateau connects Mawenzi with Kibo, the major peak. The Kibo Hut is where we’re going today, and it generally takes 5 to 6 hours to get there. You will eat dinner early and go to bed early because the night will be brief here.

The summit stage, or “The Big Day,” is today. Around midnight, your long and exhausting final ascent will start. The ascent continues higher after passing the Hans Meyer Cave at 5220m. You will arrive at Gillman’s Point (5681m), the crater rim of Kilimanjaro, at daybreak, where the light will begin to gradually warm the ground. You will quickly forget the night’s chill, and after another hour or two of hiking, you will reach Uhuru Peak at 5895 meters. When you get back to Kibo Hut, a hot supper is waiting for you, then you’ll have a one- to two-hour rest before returning to Horombo Hut.

Today is used as a day of acclimatization. This considerably increases your chances of succeeding in reaching the peak and shouldn’t be undervalued. A leisurely breakfast is followed by a four-hour hike to the Zebra Rocks (4020m). The name of the rock formation is derived from its striking black and white stripes. You will find a hot meal waiting for you when you get back to Horombo Hut. The following day’s trek will go better if you unwind in the afternoon.

The last step leads to the Mandara Hut (2700m), where a hearty meal is waiting for you after passing through the heath and moor zone. After a total of six hours of hiking, you will return to the Kilimanjaro National Park Gate after soon passing through the exotic jungle once more (1860m). A brief journey takes you back to your accommodation in Moshi after you bid goodbye to your mountain guides. Here, you may have a warm, relaxing shower and celebrate your achievement of reaching the top of Mount Kilimanjaro before being taken to the Kilimanjaro airport for your flight to Dar-es-Salaam.

After being picked up from the hotel in Dar es Salaam, you will be driven to the Dar es Salaam airport to catch your flight to Kigoma. Obtain a flight out of Kigoma. Once you arrive, you will be picked up and driven to Sigunga village, where you will board a boat to the national park in the Mahale mountains. Before taking a boat to Mahale, have a picnic lunch at Sigunga village. It will take the boat between three and four hours. Arrive at Mahale in the evening, check into your hotel, and soak in the sunset while swimming in Lake Tanganyika. After dinner, stay the night at Mango Bandas.

Following breakfast, Chimpanzee tracking in the jungle begins around 8 a.m. Even if the trip through the bush is neither difficult or difficult to access, being in good physical shape will make the journey less taxing. Seeing the threatened primates up close is a once-in-a-lifetime opportunity. Mango Bandas will provide meals and lodging.

You go trekking with chimpanzees after breakfast. Visitors can monitor wild chimpanzees that have been acclimated in the wild or go mountain climbing in Mahale. Walking safaris allow for up-close interactions with a wide variety of birds and animals, including a population of habituated chimps, in the lovely lowland forest. The main draw for visitors to Mahale is the chance to observe chimpanzees in their natural environment. You will have time to go swimming and relax at the beach in the evening. Mango Bandas will provide meals and lodging.

After a hearty 7 a.m. breakfast, a boat journey will take you back to Sigunga village. Arrival pick-up and return to Kigoma Town followed by a late lunch at the hotel, a visit to the Dr. Livingstone Memorial Center in Ujiji Village, supper, and an overnight stay at the Coast View Resort Hotel

You will board a domestic aircraft after being picked up and transported to the airport in time for your departure back to Dar es Salaam (Air Tanzania). When you arrive, we’ll pick you up from the airport and take you to the hotel as part of our airport transfer service. Tanzanite executive inn overnight. B/B.

Pick up and travel to Selous Game Reserve at 8:00 in the morning. You’ll stop for a picnic lunch along the route, and the five-hour trip will take you through some of Tanzania’s least visited and unspoiled regions. Join the boat safari in the afternoon to see hippos and crocodiles in their natural habitat.
meals and a night’s rest. F/B.

After breakfast, travel on a full-day game drive in the Selous game reserve, which is home to a variety of animals, including buffalo, lions, elephants, zebras, giraffes, impalas, warthogs, hippos, and crocodiles. Dinner and a night’s rest. F/B.

After breakfast, go on a 2–3 hour walking safari and then take a game drive via Morogoro, the Uluguru Mountains, rivers, tiny local communities, and farmland before arriving at Mikumi National Park in time for the park’s evening game drive. Dinner and a night’s rest. F/B.

After breakfast, spend the entire day at the park watching the wildlife. The Mikumi floodplain and the neighboring mountain ranges make up the park’s principal features. Lion, eland, hartebeest, buffalo, wildebeest, giraffe, zebra, hippo, and elephant are among of the animals that are frequently seen in this area. Since they mostly graze, Mikumi elephants do not do any harm. Dinner and a night’s rest. F/B.

Early game watching at daybreak, followed by a trip back to the cottage and a game drive on the way to Dar es Salaam. This day marks the end of our 17-day Mount Kilimanjaro climb and safari with a drop off at the Airport. 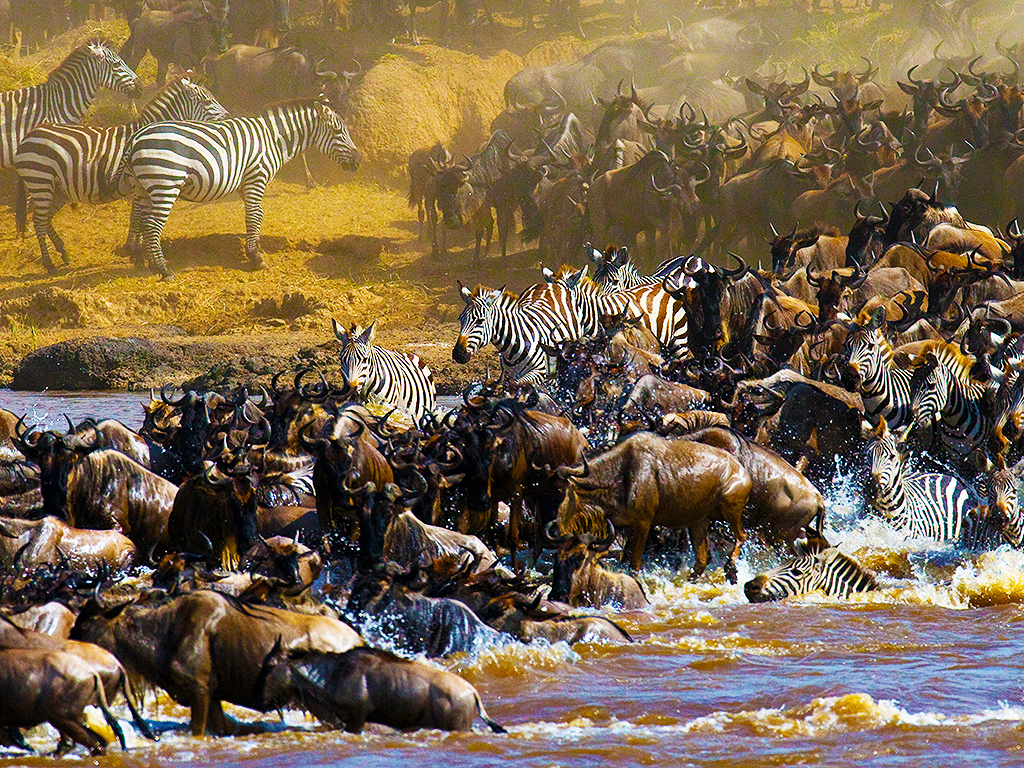 Your Tarangire day trip begins with a
Starting from