The area around Loitokitok where the Rongai Route begins is the best to use when it is raining on Kilimanjaro because it lies on the leeward side of the mountain. Are you planning on climbing Mount Kilimanjaro during the rainy season? Decide to take the Rongai Route. Outside of peak season, the north side of Kili is preferred due to its lower rainfall. Do you wish to experience Mount Kilimanjaro in peace? Once more, a wise pick is the Rongai. Despite an annual rise in popularity, there are far fewer travelers than on routes like the Machame and the Marangu. Are you seeking a Kilimanjaro path that is less difficult? Your opponent is the Rongai. One of the paths you may trek on with little hiking expertise is this one. The slope of the Rongai Route is more gradual just like the Marangu Route slopes and is easier to trek. The north side of Mount Kilimanjaro has a less diversified environment than the other side, but in exchange, you receive a distinctive, rough mountain panorama.

Read more about the Rongai Route

Why does the Rongai Route receive less rainfall?

The main reason that the Rongai Route is mostly dry and receives less to zero rainfall all year is that it runs along the leeward side of Mount Kilimanjaro. This route begins from around the Loitokitok/Oloitokitok town which is why some people call it the Loitokitok route.

Rongai Route, the only route that starts from the northern slopes of Kilimanjaro

The sole path that begins from Mount Kilimanjaro’s northern, or Kenyan, side is the Rongai Route.

The path provides hikers an experience in a relatively untamed environment where it is possible to view huge animals like antelope, elephants, and buffalo because to its remote location.

Trekkers are less likely to experience rain on the northeast slopes of the mountain since it receives substantially less precipitation than the southern slopes. Trekkers are also more likely to see the peak in its natural, unobstructed state.

Is it possible to climb Kilimanjaro on a rainy season?

Do you need to stay away from the throng in order to really appreciate the Kilimanjaro Trek? Regarding the manner that the possibility of rain during these times is more significant than during Kilimanjaro’s dry season. The climate of Kilimanjaro is quite variable because it is a free-standing mountain. In this way, the door is left open for good or bad weather, which shouldn’t be taken into account when climbing.

The wet and rainy season of Mount Kilimanjaro

If you decide to visit during the wet season, climbing will be much harder and less appealing in many respects due to the unfavorable weather and climate. The following advice will help you remain safe when hiking the Kilimanjaro Trails and prepare for a wet day.

What are the wettest months on Kilimanjaro?

April and May are the wettest months on Kilimanjaro. The worst months to climb the mountain are now. It can rain quite a bit in the latter part of March. Additionally, there is a brief rainy season in November. If you are only able to climb during these months, use the Rongai route because the northern half of Kilimanjaro is under a rain shadow.

Around mid-March, the South-East trade winds from the Indian Ocean arrive and continue far into May. (before being interrupted by the North-East Anti trade winds).

Since these winds are heavily laden with moisture from the Indian Ocean, when they finally collide with Mount Kilimanjaro and are propelled higher, they produce large rain clouds, which cause the “heavens to open.”

Therefore, the wet season on Mount Kilimanjaro, which lasts from the middle of March to the end of May, is not the best for hiking.

Due to the fact that these winds are blowing from the south, the southern side of Kilimanjaro receives most of the rain.

During this time of the year, the Northern slopes have far less rain since they are frequently buffeted by the winds.

It is preferable to think about the Rongai Route, which follows a trail from the North if one wishes to go on a journey between March and May.

Read about the best months to climb Kilimanjaro

Does rain affect your climb?

The most apparent effect of rain is that it makes you wet, which depletes body heat and increases the danger of hypothermia. Even without the added hazard, wearing damp clothes and shoes may be pretty uncomfortable. Between day treks, it’s possible that your clothing won’t ever dry entirely.

Finally, clouds, fog, wind, and water all reduce visibility. As a result, compared to the dry season, it is frequently less scenic. On the trip, you might not have many expansive sights. The exception to that is that rain generates snow, which, when it appears on the upper slopes, is highly attractive.

Pros and cons of climbing Kilimanjaro through the rain

Why would someone climb during the rainy season given the difficulties that precipitation causes?

First of all, there are instances when personal commitments prevent someone from climbing during the dry season. They continue their climb anyway since they can reach the peak at any time of year.

Second, during the dry season, Kilimanjaro is a fairly populated (i.e., popular) mountain. Hiking through the park alone during the rainy season is a popular choice for those want to avoid the throng. There are instances where a campground is literally empty save for your company, which completely alters the trip’s vibe. It is quite serene.

Last but not least, even though there is a far higher likelihood of rain at these times than there is during Kilimanjaro’s dry season, it is not a given. The weather on a big mountain like Kilimanjaro is typically unpredictable. Therefore, regardless of when a climb is attempted, the possibility of good weather or bad weather persists. If you’re lucky, it might not even rain on you.

Advice for Kilimanjaro Treks in the Rainy Season

If you do decide to climb during the wet season, keep the following things in mind to enhance your experience:

Why should you climb Kilimanjaro when it is raining?

Why would anyone climb Mount Kilimanjaro during the rainy season, therefore, knowing the difficulties that rain causes?

To start, a person’s personal schedule can prevent them from climbing during the dry season. Furthermore, people may resume their Kilimanjaro Climbing at any moment because the mountain is accessible throughout the year.

During the dry season, Kilimanjaro is also a very popular and congested peak. Choose the wet season to enjoy the lovely recreational activities if you wish to avoid crowds. There are moments when the camp is empty save for our team, which significantly alters the excursion’s energy. It’s unusually silent.

What to wear when it is wet or raining on Kilimanjaro

Before beginning the Kilimanjaro Trails on wet terrain when it is raining, you don’t need to buy any new clothing, but you will need a few essentials to stay secure and comfortable. While climbing during the rainy season, you’ll probably ultimately get wet, but following the advice below will help you stay warm and safe.

Base Layer: These might be long thermal shirts or bottoms if you’re trekking in chilly temperatures during the rainy season.

Do you have a cozy wool sweater and a fleece jacket for warmth and insulation? Both of them perform far above average since the insulating layer keeps everything warm when it becomes chilly.

Layering that is wind- and weather-proof comprises both rain jackets and rain trousers. On gloomy days, the jacket will keep you warm, and the pants will keep you toasty and mud-free.

Although the Rongai Route is flatter than the other Kilimanjaro routes, due to its rather gradual slope profile, it does not give hikers many alternatives for high ascents and low ascents.

It is possible to trek it in six, seven, or even eight days. The Rongai Routes, which last seven or eight days, are highly advised since they give hikers more time to acclimatize.

The route to Uhuru Peak from Kibo Hut is strenuous and follows the same route as the Marangu trekkers, passing Gilman’s Point.

The Rongai Route on Mount Kilimanjaro sees the least amount of traffic due to its isolated location.

The Marangu trail is used by the Rongai Route to descend from the mountain. 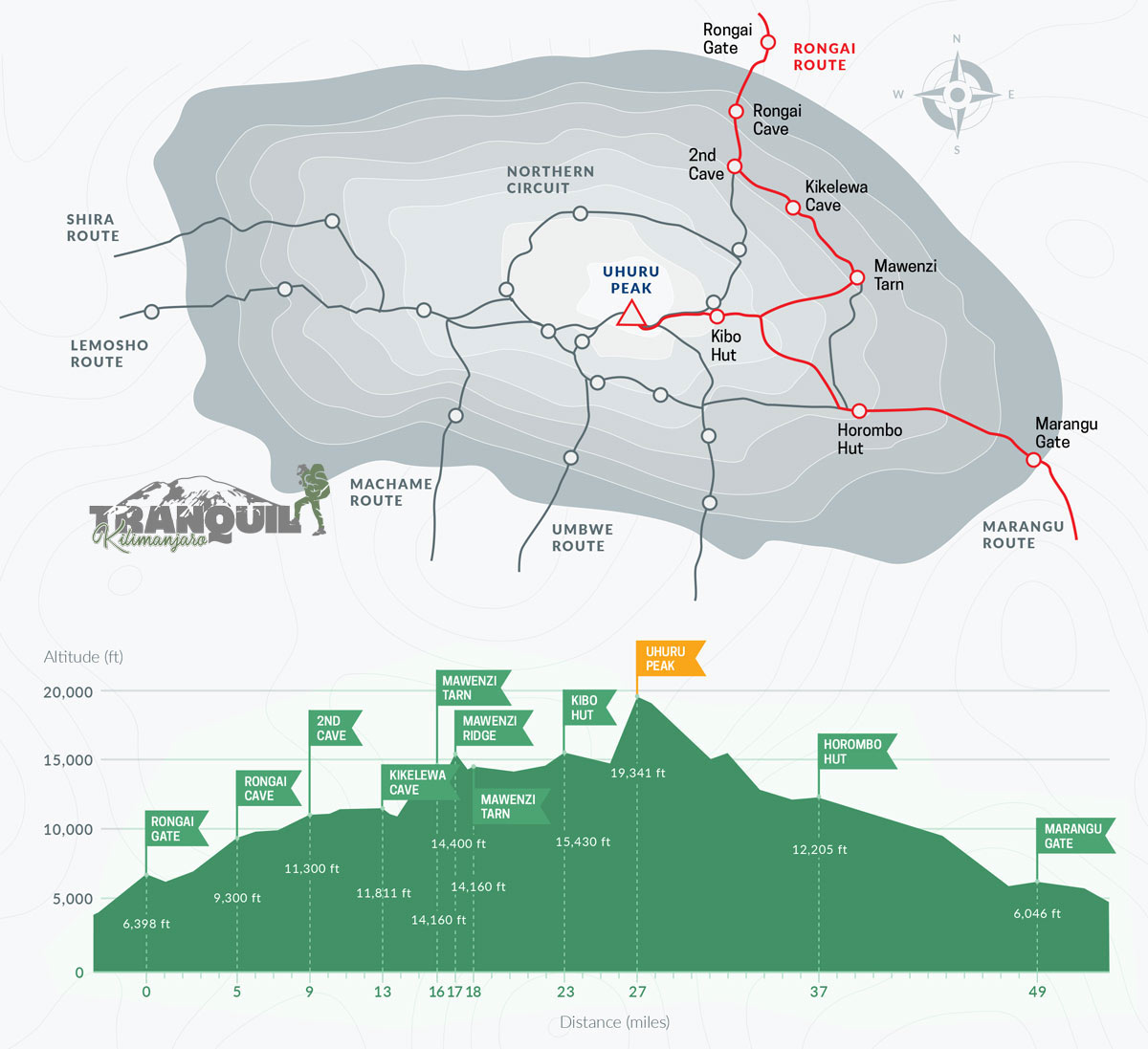 You can choose the 7 days Rongai route itinerary or the 6 days variant to climb Kilimanjaro using the Rongai Route. Six-day hikers do not stay an extra day to acclimate at Mawenzi Tarn (4,300 meters). The second day of an eight-day hike also includes a break at Rongai Second Cave (3,450 meters), before continuing on to Kikelewa Camp (3,600 meters).

What are the camps on the Rongai Route?

Although the campsites along this route are a little less developed and less often visited than those along the other routes, they all include restrooms and a Ranger’s cabin. This trail is only for camping; there are no cottages.

Advantages of the Rongai Route

Starting from the Kenyan side of the mountain in the north has the advantages of a more gradual and manageable climb, as well as superb, unobstructed views of the peak the entire way. Additionally, there are greater opportunities to witness animals like antelope, elephants, and buffalo.