How was Mount Kilimanjaro, a mountain that has distinct geology and history formed?.

Our planet’s surface is divided into several separate portions, some large and others little. Tectonic plates are what they’re called. Africa is one of the biggest continental plates on the planet.

The plates do not remain stationary; instead, they move around the earth’s surface, propelled by convection currents in the mantle. Some sink or subduct beneath others, others clash, and still, others split up. This is exactly what is going on in Africa.

In East Africa, the East African Rift Valley is a growing divergent plate boundary. The Somalian plate, which makes up the eastern half of Africa, is sliding away from the remainder of the continent, which is made up of the Nubian plate. A rift valley has resulted from this expansion. The crustal expansion has resulted in a succession of lengthy lowland valleys divided by highland areas.

Volcanoes develop when plates split apart, according to one of plate tectonics’ basic laws. This is why Kilimanjaro, as well as other well-known volcanoes like Ol Doinyo Lengai, exist.

Mount Kilimanjaro was produced as part of the Great Rift Valley’s creation. Volcanic activity focused on a few distinct places almost a million years ago. Kilimanjaro is really three volcanoes stacked on top of one another, rather than a single mountain summit. Shira, Mawenzi, and Kibo were formed roughly 3 million years ago with the formation of the Great Rift Valley.

Due to enormous forces that drove the crust skywards, Shira was the first to develop.

Shira collapsed to form a caldera around 500,000 years ago, while Mawenzi began to develop about 460,000 years ago. Kibo was produced by another eruption west of Mawenzi.

Shira, the lowest peak at 12,995 feet, last erupted half a million years ago and is now extinct. At 16,896 feet, Mawenzi is linked to the highest peak, Kibo, by a long ridge that gives Kilimanjaro’s top a “saddle” form.

Mawenzi and Shira are both extinct, however, Kibo is not. Kibo demonstrates it is still active, despite the fact that the most recent activity was roughly 200 years ago and the last major eruption was 360,000 years ago. It spews steam and sulphur into its 1 1/2-mile-wide crater, generating a series of collapses and landslides, the largest of which created the Western Breach. This stratovolcano will very certainly erupt again at some point in the future. 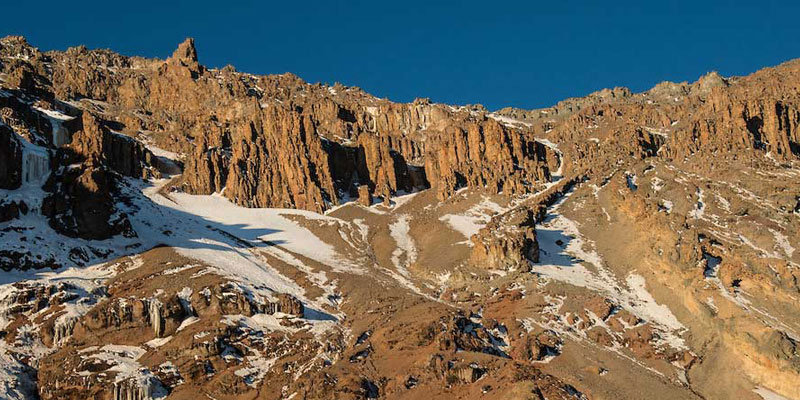 Let’s have a look at the intriguing geological processes that lead to the construction of one of Africa’s most famous sites in the article below.

When Africa’s tectonic plates began to split three million years ago, the Great Rift Valley gave birth to this famous peak. The plates that cover the Earth’s surface are continually shifting. They leave unique geological marks in their trail as they go.

How was the Greater Rift Valley formed?

Africa’s tallest mountain would be formed by three volcanoes in particular.

Shira, the earliest of these volcanoes to erupt, would finally collapse some 500,000 years ago, giving birth to Mawenzi nearly 40,000 years later. Later eruptions gave rise to Kibo, which is today the tallest peak on the mountain.

I get what you’re thinking: who hikes on a volcano? But don’t be concerned about eruptions throughout your trip. Experts believe Shira and Mawenzi are both extinct, while Kibo is dormant. In fact, Kibo hasn’t erupted in a big eruption in almost 350 years!

Mount Kilimanjaro formed three million years ago when two major African tectonic plates shifted. Mount Kilimanjaro originated as part of the Greater Rift Valley during this time, and was made up of three different volcanoes!

Shira, the highest and oldest, reaches a height of 12,995 feet. The second volcano to erupt, Mawenzi, is a little higher, reaching a height of 16,896 feet. Both, however, pale in contrast to Kibo, the legendary African mountain’s last volcano, which stands at 19,341 feet tall.

Both, however, pale in contrast to Kibo, the legendary African mountain’s last volcano, which stands at 19,341 feet tall.

In this sense, it may be simpler to envision Mount Kilimanjaro as three different volcanic peaks stacked on top of one another, rather than a single mountain. Its legendary height, striking appearance, and tourist attractiveness are due to its unique structure.

TranquilKilimanjaro
Previous postWhy is Lemosho route the best favorite among the Kilimanjaro routes?
Next postBest Tanzanian Beers to refresh after climbing Mount Kilimanjaro