The ‘Seven Summits’ ranks Mount Kilimanjaro as the fourth highest mountain after Mount Everest, Aconcagua and Mount Denali. The other mountains Elbrus, Mount Vinson, and the Carstensz Pyramid rank lower than Mount Kilimanjaro on the list of the highest mountains of the Seven Summits. Reaching the summit of all of them is considered a notable mountaineering accomplishment, and while it is no small task, it is an easily attainable feat for a dedicated climber.

You want to know that you have the highest chance of success as a mountaineer before you invest your important time, money, and energy into an expedition to one or all of the world’s Seven Summits. Tranquil Kilimanjaro has years of expertise sending climbers to Africa’s highest peak, Mount Kilimanjaro, and we’re here to help you plan your trip to the top, no matter what your timetable or goals are. For additional information, please contact us here.

Climbing the Seven Summits, the highest peaks on each of the world’s continents is regarded as one of the most prestigious sporting achievements.

Depending on who you ask, the seven summits are made up of different peaks. The list differs depending on how different territorial divisions are seen.

The two most popular lists differed in their assessment of Oceania’s highest mountain. Mount Kosciuszko is the highest peak in Australia on one side, while Carstensz Pyramid is on the other.

The tallest mountains on each of the seven continents make up the Seven Summits. They are some of the world’s most sought-after summits. The Seven Summits will test your strength and spirit, taking you to some of the world’s most remote and majestic locations, from the austere glaciers of Mount Kilimanjaro on the African plains to the white limestone cliffs of Carstensz Pyramid rising from the Indonesian rainforests to Mount Vinson among the Antarctic ice sheets.
Climbing to the top of all of them is considered a mountaineering challenge, which was first accomplished by Richard Bass on April 30, 1985. The Explorers Grand Slam is a combination of climbing the Seven Summits and reaching the North and South Poles. Below are all the mountains on the Seven Summits and their respective heights or altitudes.

Who came up with the “Seven Summits” idea and what are they?

Dick Bass proposed and achieved the seven summits, a climbing, and exploration challenge to climb the highest peak on each of the seven continents, in 1985. He came up with the idea of the seven summits that feature the highest peaks on each of the seven continents. and they are:- Asia – Mt Everest (8848m), South America – Aconcagua (6962m), North America – Denali (Mt McKinley) (6194m), Africa – Mt Kilimanjaro (5892m), Europe – Mt Elbrus (5642m), Antarctica – Vinson Massif (4892m), Oceania – Puncak Jaya aka Carstensz Pyramid (4884m). 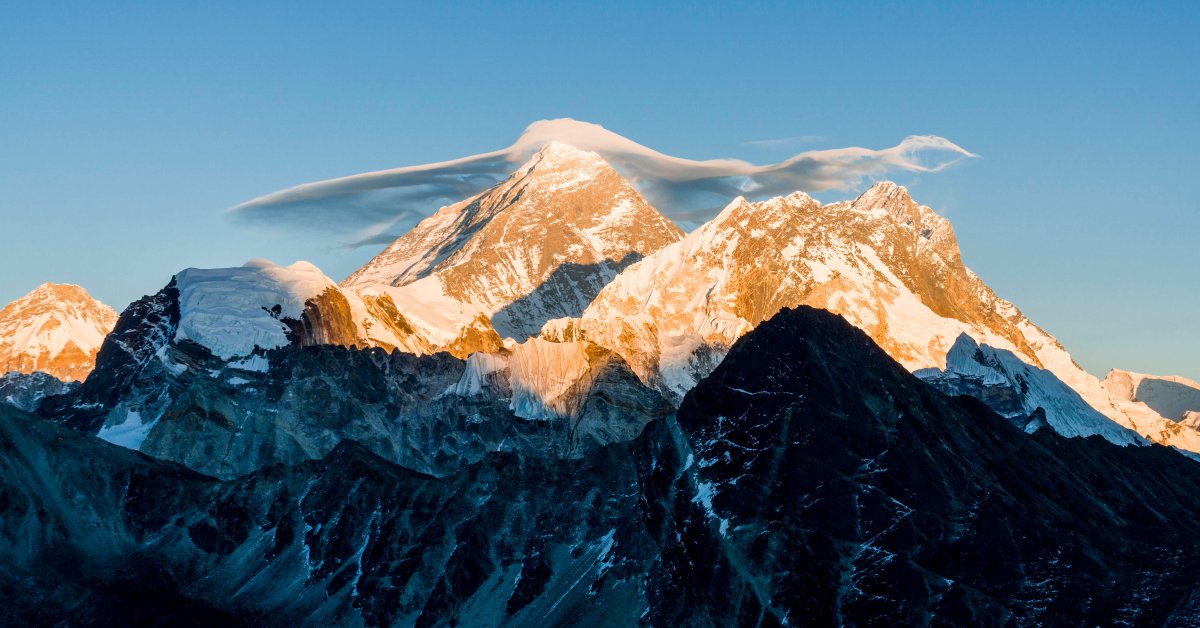 Mount Everest is Asia’s and the world’s highest peak. It is located in southern Asia’s Great Himalayas, on the boundary between Nepal and Tibet.
It crosses the border between China and Nepal in Asia’s Great Himalayan Range and is known as “Chomolungma” in Tibetan and “Sagarmatha” in Nepalese.
The official Survey of India initially designated it as the highest point on the Earth’s surface in 1852, with a height of 29,035 feet (8,850 meters). Expeditions to the peak of Everest began in the 1920s, but Edmund Hillary and Tenzing Norgay did not reach the summit until 1953.

Mount Everest is the world’s tallest peak. Mount Everest is a significant endeavor and the climax of many mountaineers’ careers, with its tremendous height, harsh weather, and difficult logistics. It’s a breathtaking trip in Nepal’s gorgeous Khumbu Valley, which is home to the Sherpa people. The traditional Southside Route is climbed by Mountain Gurus. Our Everest expeditions are led by some of the industry’s most experienced guides and are backed up by some of the best logistical and basecamp amenities available.

First Ascent: In 1953, Tenzing Norgay and Sir Edmond Hillary were the first to reach the summit of Mount Everest.

Fast Fact: In 1924, British mountaineers George Mallory and Andrew Irvine died just below the summit on the north side of Mount Everest, setting the stage for one of mountaineering’s greatest mysteries. Nobody knows if they made it to the top over 30 years before the first documented climb in 1953. 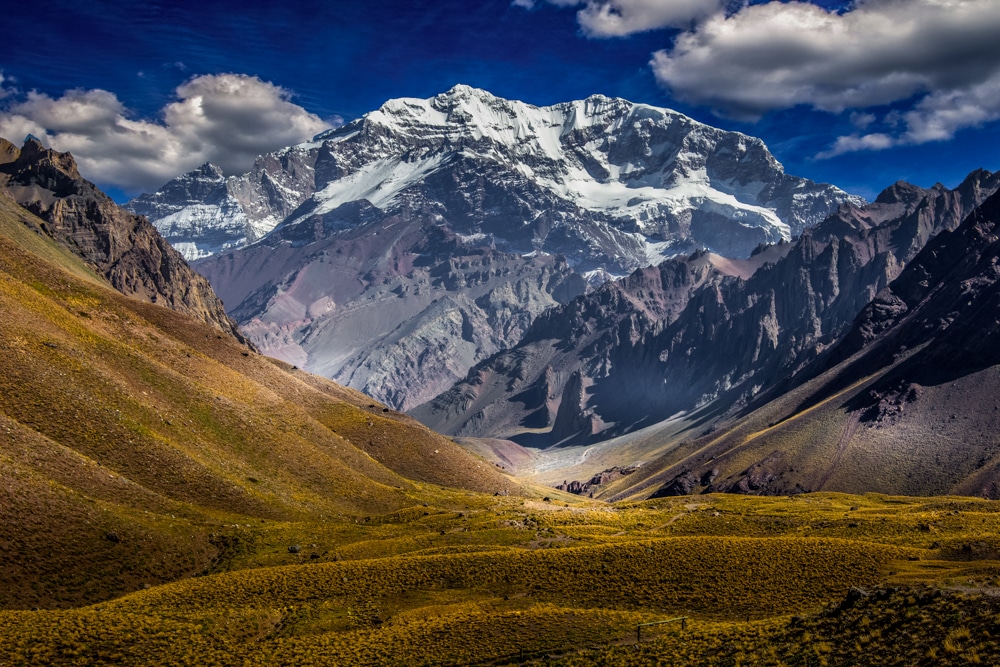 The tallest mountain in the Western and Southern Hemispheres, as well as the highest peak outside of Asia, is Aconcagua. It is one of the most climbed of the Seven Summits due to its credentials and reasonably accessible climbing routes.
It’s in west-central Argentina, near the Chilean border. A ridge connects the north and south peaks of Mount Aconcagua. The southern peak is 22,736 feet above sea level (6,930 meters). Swiss climber Matthias Zurbriggen was the first to reach the higher northern peak, which stands at 22,831 feet (6,959 meters).

First Ascent: Matthias Zurbriggen was the first to reach the summit in 1897.

Fast Fact: One of the world’s tallest modern art exhibitions is housed in a tent at Plaza de Mulas Base Camp. 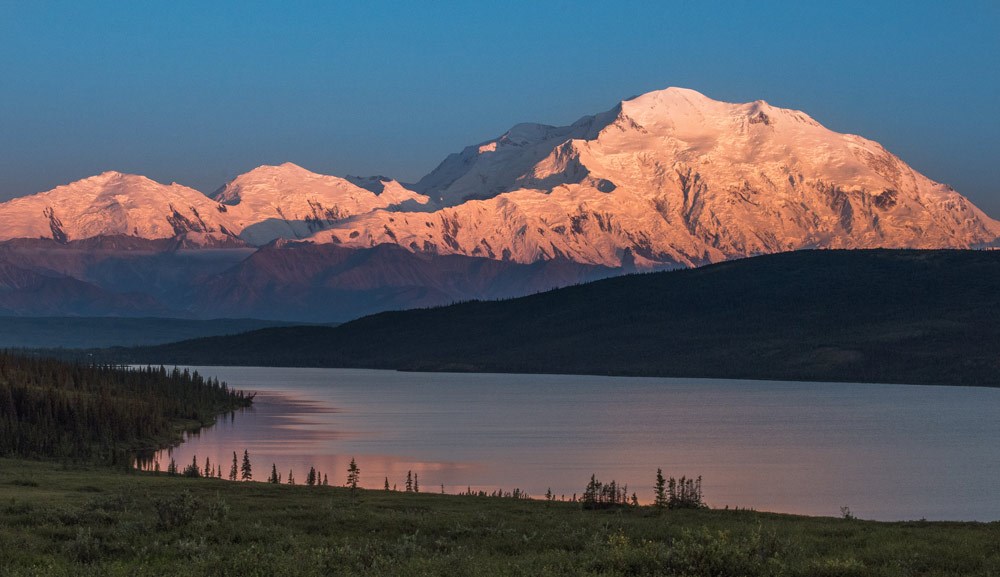 Denali (also known as Mount McKinley) is North America’s tallest mountain. It is located in south-central Alaska, in the Alaska Range.
Denali means “Great One” in Alaska’s indigenous Koyukon language. It is not only North America’s tallest peak, but it also has the largest base-to-summit increase of any mountain totally above sea level. Although it is not the highest of the Seven Summits, Denali’s northerly position means climbers must contend with bitter weather and abrupt storms, making it one of the world’s most difficult mountains. The mountain stands at a height of 18,000 feet (5,500 meters). The first climbers to summit the North Peak were two prospectors in 1910.

First Ascent: On June 7, 1913, Hudson Stuck and Harry Karstens led a team to the genuine summit of the South Peak. Hundreds of climbers attempt to reach the peak every year nowadays.

Fast Fact: Winter temperatures on Denali have been as low as minus 99 degrees Fahrenheit, according to a meteorological station there.

Check out the best hotels near Kilimanjaro International Airport

Mount Kilimanjaro National Park was established in 1973 to safeguard the peak, and in 1987 it was declared as a UNESCO World Heritage Site.
It’s a volcano that towers above northern Tanzania, visible for miles from the Serengeti Plains to the Maasai Mara grasslands.

Despite its height, “Kili” is one of the most approachable of the Seven Summits due to its mild weather and non-technical trekking route to the top. Trekkers on a Kilimanjaro trip will enjoy the companionship of our friendly Tanzanian guides as well as spectacular views of the glaciers at the mountain’s peak. The majority of climbers stay in Africa to embark on a safari in the Serengeti or the Ngorongoro Highlands.

First Ascent: After a six-week ascent, Hans Meyer and Ludwig Purtschellar made the first ascent in 1889.

Mount Elbrus, located in southern Russia, is the highest point in the Caucasus and Europe. This extinct volcano, which was formed more than 2.5 million years ago, contains twin cones that reach altitudes of 18,510 feet (5,642 meters) and 18,356 feet (5,356 meters) (5,595 meters). A British expedition led by Swiss guide Peter Knubel scaled the higher cone for the first time in 1874.
In Russia’s the Caucasus Mountains, just north of the European-Asian border, it towers over its neighbors. Twenty-two glaciers flow down the mountain’s sides. Because climbers may spend every night of the trip in luxury hotels or high mountain huts, Mt. Elbrus is an ideal alternative for individuals who are still honing their high-altitude expedition abilities.

Climbers can take a chairlift up to 12,052′, and snowcats can take them even higher. Mountain Gurus offers a seven-day Elbrus Express trip, a ten-day trip that includes a visit to Moscow, and a post-climb vacation of Saint Petersburg.

Notable Ascents: In 1997, a Russian crew used a system of pulleys to bring a Land Rover Defender to the top. It lost control on the way down, and the driver leaped out just in time to avoid crashing.

Fast Facts: Every year, a race to the peak takes place. Anatoli Boukreev, a well-known Russian climber, was the first to win it in 1990. Andrzej Bargiel established the current record of 3 hours, 23 minutes, 37 seconds to the peak in 2010. 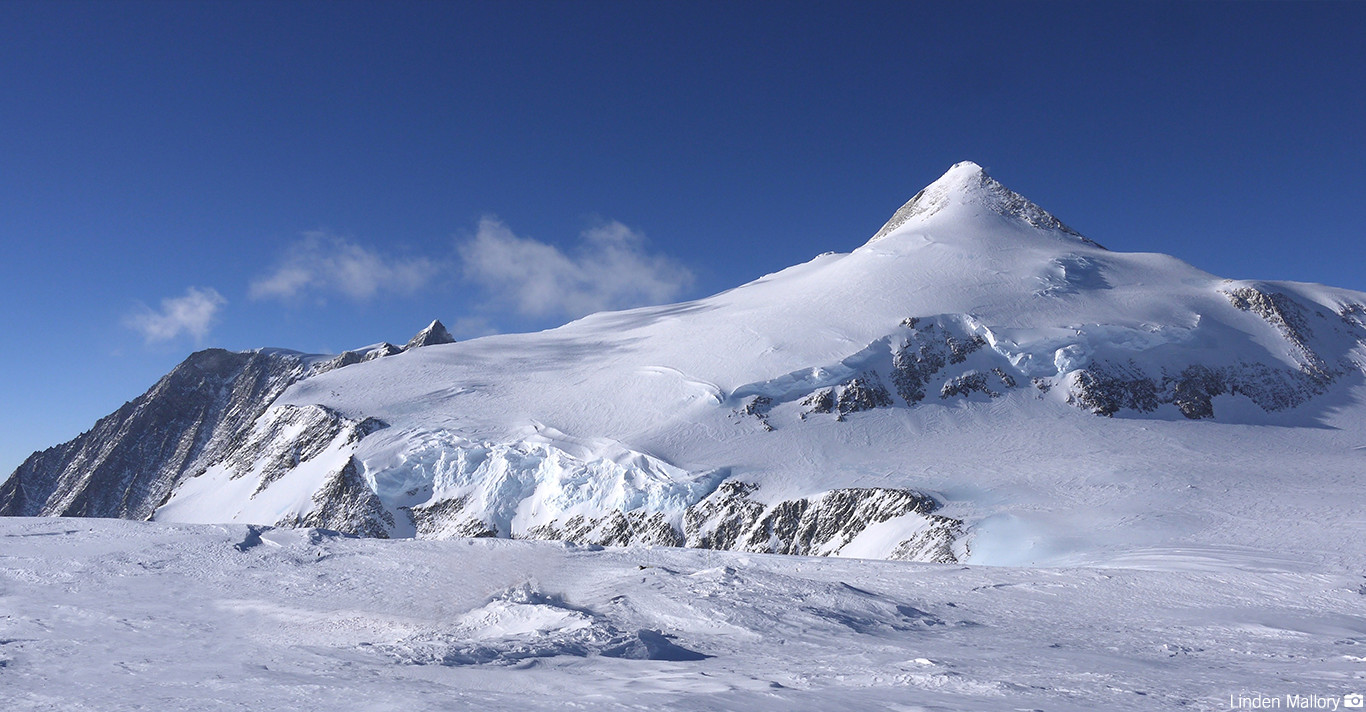 The Vinson Massif is Antarctica’s tallest peak, discovered by American explorer Lincoln Ellsworth in 1935. The mountain overlooks the Ronne Ice Shelf and is part of the Ellsworth Mountains’ Sentinel Range in the western region of the continent. Its highest point is 16,050 feet (4,892 meters) above sea level. Vinson is named after Carl Vinson, a US politician who advocated for Antarctic exploration. An American expedition financed by the American Alpine Club and the National Science Foundation first reached the summit in 1966.

Mount Vinson, rising high above the Ronne Ice Shelf approximately 750 miles from the South Pole, is the fifth tallest of the legendary Seven Summits, although it was the last to be discovered, named, and climbed due to Antarctica’s harsh weather and complicated logistics. The first ascent was achieved by an American team headed by Nicholas Clinch in 1966, more than a decade after Tenzing Norgay and Edmund Hillary reached the summit of Mount Everest. Mountaineers endure the difficulties of camping on glacier ice on Vinson, despite the freezing weather and fierce winds.

They are rewarded with a once-in-a-lifetime ascent over the ice-covered continent’s surreal grandeur at a season when the sun never sets.

First Ascent: An expedition led by Nicholas Clinch made the first ascent in 1966.

Other Notable Ascents: In 2001, an expedition headed by Conrad Anker made the first climb of the east side.

Fast Fact: Although scientists have long hypothesized the existence of a high peak in West Antarctica, the Vinson was not discovered until a Navy plane flew near enough in 1958.

Learn why Lemosho is the favourite route among climbers

Carstensz Pyramid is the highest peak in Indonesia, as well as the tallest mountain on the Australian Continental Plate and in Oceania, which includes Australia. It’s a stunning pinnacle rising from the steep, serrated ridgeline of the Sudirman Range on the lush island of New Guinea, and it’s known locally as “Puncak Jaya.” Although it is not the tallest or most difficult of the Seven Summits, it is sometimes regarded as the most technically difficult. Mountain Gurus arrives at base camp after a breathtaking helicopter journey across the mountains. After the climb, most climbers prefer to unwind on Bali’s beaches.

First Ascent: Heinrich Harrer, a famous Austrian mountaineer, made the first ascent in 1962.

Other Notable Ascents: In 1936, a Dutch expedition ascended nearby Carstensz Range mountains, including Ngga Pulu, which would have been the highest point until extensive glacier melting changed the mountain.

Fast Fact: The peak was named after Dutch adventurer Jan Carstenszoon, who discovered it in 1623. For 200 years, the observation went unconfirmed, and he was mocked for claiming to see glaciers so near to the equator.

Are you attending the Kilimarathon 2022?

Mt. Kosciuszko is Australia’s highest peak, dominating the Australian Alps National Parks and Reserves’ skyline. Its inclusion on the list of the Seven Summits has been a source of contention. It depends on how a continent is defined. Dick Bass climbed Kosciuszko instead of the Carstensz Pyramid while completing the Seven Summits for the first time in 1985, believing that mainland Australia should be included as the entire continent. Reinhold Messner, a renowned mountaineer, proposed that Carstensz, as Oceania’s highest peak, should be climbed instead.

Today, the Messner List is more popular, owing to the fact that Carstensz is a genuine adventure climb, whereas Kosciuszko is a simple stroll. In 1986, Patrick Morrow, a Canadian, became the first person to complete the Messner List.

First Ascent: Pawel Edmund Strzelecki made the first ascent in 1840, but indigenous peoples were probably there much before that.

Learn why Mount Kilimanjaro is the best adventure in the world.